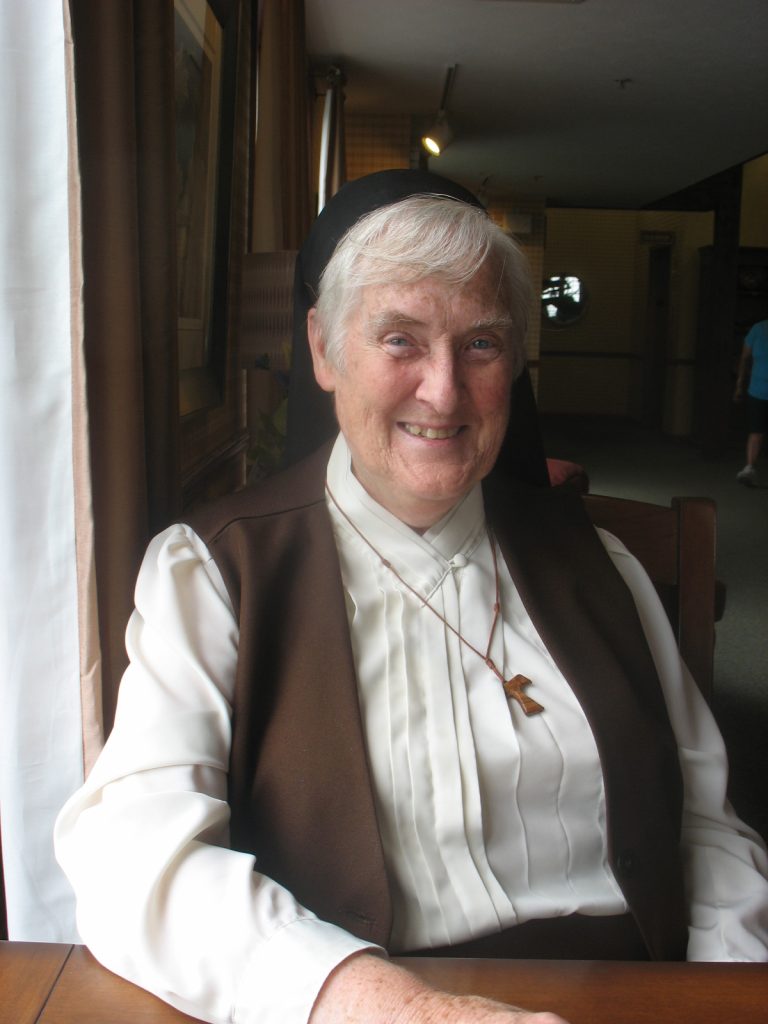 Sister Agnes Marie Regan, OSF, has served the diocesan TV Mass in both Fort Wayne and South Bend for 25 years. — Photo by VinceLaBarbera

“Every Sunday, I had the joy of electronically stepping into the sacred space of sick rooms in hospitals, nursing homes, living rooms and prison cells to bring the celebration of the Eucharist to so many dedicated Catholics and others who treasured this prayer of the church so very much,” said Sister Agnes Marie Regan, OSF, earlier this month. “Though I couldn’t see their faces, I knew they were present there with us as the Word and Eucharist were celebrated with them and for them.”

On July 2, Sister Agnes completed 25 years of ministry in both Fort Wayne and South Bend as a vital part of the weekly TV Mass telecasts at both ends of the Diocese of Fort Wayne-South Bend. In a letter recently submitted to Bishop Kevin C. Rhoades, Sister Agnes requested she be allowed to step down from her responsibilities as master of ceremonies for the TV Mass in South Bend to allow her more time to devote to the 16 Secular Franciscan Fraternities in Indiana for which she serves as spiritual assistant.

“What an honor and a joy it was to begin serving the diocese’s TV Mass ministry in 1992 with the late Msgr. Edward Hession in Fort Wayne and then with Msgr. Bernard Galic in South Bend in 2000,” she continued.

“I was always fascinated and humbled by the sense that the ‘viewing’ parish extends outward 85-90 miles. In the TV studio (in South Bend and at the University of Saint Francis Chapel, Fort Wayne) all one sees are a wonderful group of faithful ‘parishioners’ who join us for Mass. But the ever-present little red light on the camera is a symbol of the thousands of persons who have joined us for Mass ever since its beginnings by the late Bishop John M. D’Arcy in 1986.”

“The joy of knowing how much the TV Mass meant to people made me want to continue doing it, because it was helping Catholics and non-Catholics receive this most important prayer in their personal spaces,” related Sister Agnes.

She said two ladies approached her one evening at the Hacienda Mexican Restaurant in South Bend and asked, “Are you the sister we think you are?” Sister Agnes answered, “That depends on who you think I am.” “You’re on TV, aren’t you?” both exclaimed. The ladies shared that they were non-Catholic but watched every Sunday morning because they loved the service.

“It’s always very appreciated when people approach, introduce themselves and say how much the TV Mass means to them. I’ve heard ‘thank you’ in the food court at Macy’s in Chicago, from fellow passengers on the South Shore train and in the food aisles at Walmart and Kroger,” she said. People also ask: “Aren’t you the TV sister?” “Will you be back in South Bend for the TV Mass tomorrow?” and “How do I know you?” The list goes on, she said. “Some of my Franciscan sisters say, ‘We can’t take you anywhere.’”

“Many folks, who are not confined because of illness or other reasons, have indicated they like attending Mass in their respective parish but also watch the televised Mass so they can enjoy a second reflection on the readings. Others have mentioned they’ve learned the value of the TV Mass the first time they were ill and could not attend Mass in their home parish,” Sister Agnes emphasized. “And when a Michiana winter has the rest of the world snowed in, our TV Mass team always feels it’s a sacred honor to brave icy roads and snow to get to WNDU-TV to provide Mass for all those unable to get to their parish churches.”

“We have witnessed baptisms, blessings before surgeries, young priests in the first months of ordained priesthood as well as senior priests in the last days of their ministry to the church, but still dedicated and wanting to share the gift of their priesthood until the very last,” she said.“Technically, we have about 28 minutes and 30 seconds of air time to complete the Mass, so we’ve learned how to ‘stretch’ when celebrants finish too early or ‘punt’ when the flow of prayer exceeds that limit.” She once had to interrupt a young priest who, with 30 seconds of time left, only was at the “Lamb of God.” She whispered to him, “Give them the final blessing.” He replied, “But the Mass is not finished.” Sister Agnes again stressed, “Give them the final blessing – now!” He did, and when the studio lights were turned off she said, “Now, finish the Mass.”

Born in Chicago, raised in Huntington – where she graduated from Huntington Catholic High School – young Mary Agnes entered the Sisters of St. Francis of Perpetual Adoration in Mishawaka in September 1960 despite early aspirations of becoming a United Nations interpreter, an interior decorator, a sociologist and a veterinarian. Sister Agnes said, “Four different communities of sisters were working on me through prayer: The Sisters of St. Francis, School Sisters of Notre Dame, Our Lady of Victory Missionary Sisters and a Sister of St. Joseph, a friend of my mother. Everybody knew my vocation but me,” she quipped.

She holds bachelor’s degrees in education and theology from the University of Saint Francis and the University of Notre Dame, respectively, and a master’s degree in religious studies from Calumet University, Calumet City. Her 57-year religious career includes teaching junior high, twice working as a school principal, serving the motherhouse in liturgy and music, and assisting the diocese in the Tribunal, as director of worship and as a pastoral associate at St. Matthew Cathedral, South Bend.