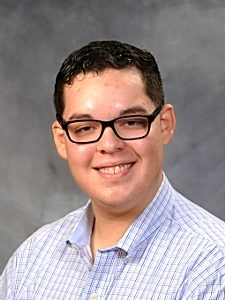 For some, math is a formidable academic subject, but not for Saint Joseph High School valedictorian Tomás Aguilar-Fraga. It’s not only one of his strongest subjects, but also one he enjoys as a pastime.

“I’m very interested in mathematics — I have recreational mathematics books in my room,” he said. He hopes to pursue a professorial position in mathematics one day and will enter Harvey Mudd College in the fall to major in math.

Aguilar-Fraga’s love of numbers is also why he has been passionate about the Quiz Bowl team at Saint Joseph, which is his primary extracurricular activity.

Aguilar-Fraga has incorporated his knowledge of the Catholic faith into volunteer work for La Casa de Amistad, a South Bend community center focused on helping the Latino community. He also worked in the Crece Conmigo program, helping kids in grades K-6 with their homework and generally supervising them. “I respect the faith in many ways, particularly the emphasis on love, giving back and helping immigrants,” he shared.

At Saint Joseph, Aguilar-Fraga was able to learn about the Catholic faith and understand more clearly what Catholics believe. He explained: “I was able to recognize the many good parts of the Catholic Church and the many parts I agree with, and therefore was able to establish common ground when talking about faith with others.”

He will cherish most of his high school memories, which included time with his family and the close-knit group of friends made at Saint Joseph. He particularly loved working with the Quiz Bowl team and with the incredible teachers who opened him up to new ways of thinking about different subjects. He said that by working late on labs with friends, he was challenged to try to “understand new concepts in a different way,” which Aguilar-Fraga believes will serve him throughout his life.