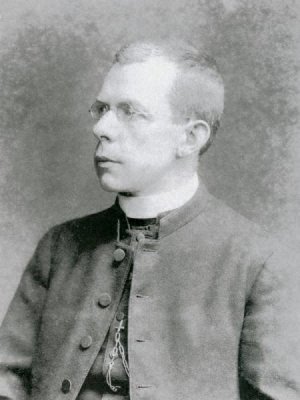 Three priests gave spiritual comfort to the anxious and doomed on April 14, 1912

A century now has passed since the British luxury liner, S. S. Titanic, sank in mid-Atlantic after striking an iceberg on April 14, 1912. Other sea disasters have cost more lives, but none has retained the popular interest as much as the loss of what then was the largest and grandest ship afloat.

Another dimension to the story, almost never told, but rich in heroism and dedication, is about the three Catholic priests who were aboard. All three refused seats in lifeboats as the great ship was foundering, refusing to leave the terrified passengers. Survivors also remember the priests’ heroism, and that the priests gave spiritual care to the passengers literally until the end. All three went down with the ship.

Passengers who survived the disaster remembered the three priests on the voyage. The priests celebrated Masses every day. (There would have been three separate Masses. Concelebration in the Roman Rite, aside from priestly ordinations, was not allowed until after the Second Vatican Council.)

The Lithuanian was Father Juozas Montvila. He had been born at Gudine, near Marijampole, Lithuania, on Jan. 3, 1885. After studying at the Seinai Seminary (now in Northeastern Poland), he was ordained a priest on March 22, 1908.

His first official assignment was to a parish in Lipskas, but he had a secret ministry. He served the Ukrainian Catholics, in communion with Rome, and they were in disfavor with the government of Czar Nicholas II.

At the time, Lithuania was under Russian control, and the czar’s government supported and advanced the Orthodox churches. Roman Catholics were tolerated. Powerful Austria-Hungary would have resented anything else. France’s significant Catholic population would have resented anything else. Russia had to keep its friends abroad. But, Ukrainian Catholics in union with Rome had no influential friends.

Father Montvila was discovered. The imperial authorities removed him from the Lipskas parish and forbade him to act as a priest. He went to work for a Catholic newspaper in Seinai. An artist, he drew illustrations for Catholic books and pamphlets.

Realizing that the government would not likely revisit his sentence, and wanting to act as a priest, he finally decided to emigrate to the United States. His brother, Petras, already lived in America.

Going first to England, he booked passage on the Titanic. On the fatal night, Father Montville was on the boat deck as the lifeboats were filled. A survivor reported, “the young Lithuanian priest, Jouzas Montville, served his calling to the very end.” He was offered a place in one of the boats, but he refused to go, preferring to stay on board to provide spiritual consolation to the passengers who were doomed.

His body was never recovered, or if recovered, it was never identified. A movement now exists for his canonization.

The Bavarian priest was Benedictine Father Joseph Benedict Peruschitz. He was born on March 21, 1871, in Stasslach-Dingharting, in Bavaria. He entered the Benedictine community at Scheyern in 1894, and on April 28, 1895, he was ordained a priest.

In 1912, he was on his way to join the faculty at St. John’s Abbey in Collegeville, Minn. He spent Holy Week at St. Augustine’s Benedictine house in Ramsgate, England, before boarding the Titanic.

Along with Father Byles, the English priest, he went among Catholic passengers after the ship’s collision with the iceberg, giving absolution. One report said it was not an effort that attracted unanimous admiration. Some people on deck mocked the priests. But, the priests continued to pray with those who asked for prayer.

Father Peruschitz also was offered a place in a lifeboat, but he too declined to leave the other passengers.

One survivor recalled seeing him shortly before the sinking in a group of passengers leading them in the rosary.

This priest also died with the ship. His body was never recovered, or if it was recovered, it was never identified. 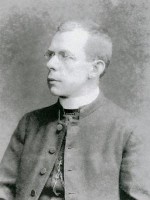 The third priest aboard the famous ship was an Englishman, Father Thomas Roussel Davids Byles, who had a very interesting life.

Born on Feb. 26, 1870, in Yorkshire, he was the son of a Congregationalist minister. For a while, this minister served a congregation in Omaha, Neb., and his family was with him.

The Byles family was prominent. The priest’s uncle served as a Member of Parliament and was knighted. One of the priest’s sisters was a missionary in China.

Thomas Roussel Davids Byles himself went to Oxford, where he developed an interest in Roman Catholicism. He converted, and he also took a new name. His new name was “Roussel.” Interestingly, it was taken from the name of a Huguenot ancestor, Francois Roussel, who had fled to England from France in 1684, a year before King Louis XIV revoked the Edict of Nantes.

After converting, he went to Rome to study for the priesthood. He received a degree in theology from the Gregorian University, and on June 15, 1902, he was ordained to the priesthood.

After returning to England, he took a teaching position at St. Edmund’s College, in Ware, Hertfordshire, a Catholic school. From 1905 until his death, he served as pastor of the Catholic parish in Ongar, Essex.

Father Byles’ younger brother, William Byles, also converted to Catholicism. This younger brother moved to the United States. In Brooklyn, he met a woman who eventually became his wife. The couple invited Father Byles to come from England to officiate at their wedding. It was scheduled for the weekend after the Titanic was to have landed in New York.

After sailing from Southampton on April 10, the Titanic called at Cherbourg, in France, to receive additional passengers. Many of these passengers had come from Paris aboard special trains chartered by the White Star Line.

While the ship was in port in Cherbourg, Father Byles wrote his housekeeper in Ongar. His letter, which was removed from the ship in Cherbourg and posted, survives. The letter is filled with descriptions of the ship’s comfort and size.

For example, the priest noted that although the Channel was very rough that day, the Titanic had made the crossing with little vibration or rolling. He also mentioned that two other priests were on board, a Bavarian Benedictine, and a secular priest from Lithuania.

So, evidently within hours of sailing from Southampton, the three priests had met each other.

Many others, however, were from continental Europe. Father Byles preached his third class homily in English and French, and the Father Peuschitz followed with a sermon in German and Magyar.

When the collision with the iceberg came, Father Byles returned to third class. Many of its passengers, never before aboard a ship on the high seas, and such a huge ship at that, never amid such a crowd in such an emergency, and handicapped by no knowledge of English in a strictly English-speaking environment as was the Titanic, were at the mercy of the circumstances.

Survivors remembered that Father Byles pointed third-class passengers to exits from lower decks or into the boats. He heard confessions. He prayed with anxious passengers.

Some reported that he too was offered a seat in a departing lifeboat, but he refused to leave the other passengers. He died with the ship.

His brother and his brother’s fiancée went on with their wedding, conducted of course by another priest. Newspapers of the day said that the couple left the church in their wedding finery, went home to change into mourning clothes, and returned to the church immediately for a Requiem Mass for Father Byles.

Later that year, they traveled to Europe. They toured the House of Commons where their guide was a young man destined to be very much a part of the British Parliament, Winston Churchill.

In Rome, Pope St. Pius X received them, and the pope called Father Byles a martyr.

A future priest was on board the Titanic for a while, but he was not ordained at the time, and in any case he left the ship before it departed from Europe.

He was an Irish Jesuit scholastic, Francis M. Browne. In 1912, his uncle bought him a first-class ticket on the Titanic, just for the Channel crossing from Southampton to Queenstown (now Cobh) in Ireland. It was a gift, obviously given to allow the young student the opportunity to see the splendid new pride of the British merchant marine, and to enjoy several gourmet meals in its magnificent first class dining room.

Young Browne was an enthusiastic amateur photographer. He took many pictures of his hours on the ship, and these photographs became important records of the ship after the disaster.

As planned, when the Titanic landed in Queenstown, cleric Browne went ashore and went home. Later that day, the ship sailed into the open Atlantic and into history. Ordained in 1915, Father Browne became a famous retreat master in Ireland. He died a natural death in 1960.

Five Protestant ministers were aboard the Titanic. None survived. The wife of one of these ministers also perished.

Rescue ships eventually recovered many bodies from the scene. Many of these bodies were identified and sent to relatives for burial, either in the United States or Europe. The many unidentified bodies were taken to Halifax, Nova Scotia, where they were buried. Perhaps one or more of these priests were buried in Halifax among the unidentified.

Newspapers and magazines of the time specifically reported the heroism of these priests. Small monuments exist, one to Father Peruschitz at the Scheyern abbey in Bavaria, the other to Father Byles at the parish church in Ongar, Essex.

Several years ago, the American Benedictine Historical Review published an article about Father Peruschitz. However, given the considerable publicity still forthcoming on the disaster, little reference is made today to these three priests, all of whom literally gave their lives to provide spiritual comfort to the anxious and the doomed.