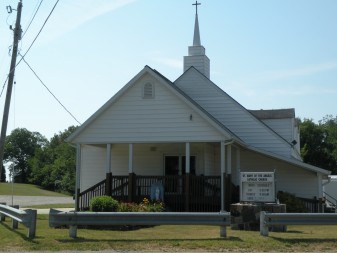 St. Mary of the Angels Oratory at Big Long Lake in Hudson will celebrate its 75th anniversary on Sunday, July 22, following the 9 a.m. Mass celebrated by Bishop Kevin C. Rhoades. A buffet breakfast will be served after the Mass. The exterior shot is shown above.

HUDSON — The tiny faith community of St. Mary of the Angels Oratory on Big Long Lake in northeastern Indiana will celebrate its 75th anniversary on Sunday, July 22.

Secretary and long-time member Mary Bartlett calls it simply “a gathering to celebrate 75 years of being a Catholic institution in this area.”

Following the 9 a.m. Mass that day, a buffet breakfast will be served on church grounds and it is hoped that family members of all generations who have either been members at St. Mary’s or who have attended Mass there during summers at the lake will join the celebration.

There will be plenty of parking, Bartlett says, and golf carts will provide transportation to the gathering area for those needing a lift. “We want all to feel welcome to come,” she says.

It seems appropriate, somehow, that a church in the lake community actually first gathered in a cottage owned by Stanley and Mary Burke in an area called Shady Nook on the lake’s north side. Using a borrowed altar and vestments and other needed items, a Conventual Franciscan friar from Angola, Father Patrick Gauchet, said the first Mass in the summer of 1937.

In 1942, newly ordained Father Gregory Kollros came to the small parish and immediately began raising money to build a church for the burgeoning Catholic population. With help from the diocese and donation of land from the Howe family, construction was begun in late 1948 and Mass was celebrated in the new church in the spring of 1949.

At first, St. Mary’s was a summer mission of St. Joseph Church in LaGrange and was placed under the care of the Franciscan priests at St. Anthony Novitiate in Angola. It was named St. Mary of the Angels to honor the Blessed Virgin Mary.

Over the next several decades, an organ and a tabernacle were secured, religious articles added, and the mission church and grounds kept in excellent repair by scores of dedicated volunteers. Finally, in 1982, St. Mary’s gained its independence from St. Joseph’s and Father John Columban was appointed administrator.

More improvements were added over the years, including air conditioning, a restroom and cry room, a new roof, an entrance deck with a ramp for the handicapped and a garage for the priest’s car. Church festivals dubbed “country fairs” provided recreation and family fun. 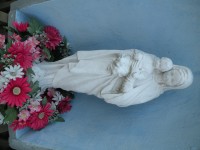 A Madonna holding the Christ child is located in a shrine near the entrance of the church.

By 1999, 80 families were registered, with the 125-seat church overflowing to the outdoors during the summer months and a special Mass was celebrated in June to note 50 years in that edifice.

But in 2000, the parish council grew concerned about their ability to secure priests and questioned then-Bishop John M. D’Arcy about the future of St. Mary’s. He agreed to allow Sunday Masses to continue but could not promise to assign a priest there due to a shortage of clergy. Franciscan Father Phillip Ley was appointed pastor in 2002 but was transferred to San Damiano Friary in San Antonio in 2004.

Since then, retired priests of the diocese have celebrated weekend Masses, most notably Father James Rose until his recent death, Father Jacob Gall, Father Paul Bueter, Father William Pyle and Father Adam Schmitt. A request from the parish to the bishop to enlarge the church was denied so it remains much the same size as originally constructed.

In 2006, Bishop D’Arcy decreed that St. Mary of the Angels would once again become an oratory or mission church, with no priest assigned, much as it began more than seven decades ago. All church records were transferred to St. Michael the Archangel Church in Waterloo and its pastor, Father David Carkenord, was named administrator.

The current St. Mary’s 70-family church is as active as ever, however, with all duties from cleaning and maintenance to playing the organ for weekend Masses handled by volunteers.

Bartlett says, “We’re not a parish but we don’t know it yet.” 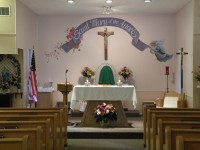 The interior and altar of the oratory.

Father Carkenord echoes that sentiment. “We’re running like a parish … the faith is alive and well over there.” Volunteers have stepped right in. “They keep it hopping,” he says.

The Rosary Sodality hosts breakfasts, lunches, dinners and social gatherings for all occasions from graduations to funerals. Parishioners are active in small faith-based groups, attend conferences, conduct CPR classes and honor their priests’ special milestones. Groups like Especially for You cater to seniors, Bible studies groups attract those of all ages and many provide assistance to area food banks.

“We want (the church) to remain a visible sign of our faith,” continues Bartlett. “It’s been the people who love St. Mary’s and want it to thrive and stay healthy.”