An estimated 2,000 pro-life advocates, many of them from various local Catholic parishes, came out to attend the 48th annual Northeast Indiana Rally and March for Life in Fort Wayne on Jan. 29. Congressman Jim Banks, representative for Indiana’s 3rd district, gave the keynote address at the rally prior to the march through downtown.

Right to Life of Northeast Indiana board member Dr. Peter Scaer led those present in prayer at the start of the rally. In his prayer, he entreated God for the safety and protection of “our children” from the moral evils running rampant today and for an immediate end to abortion in the state of Indiana, both of which were met with cheers of affirmation. Next, Mike and Lisa Davis shared their heartache over an abortion they had before their marriage and how it was only through a post-abortive healing ministry called Deeper Still that they were able to find peace and a loving marriage.

As the keynote speaker, Congressman Banks was well-received by the crowd. He honored Cathie Humbarger, who served at RTL for 20 years and recently left to focus on her work at Reprotection, a nationwide organization that she founded, whose purpose is to enforce pro-life legislation already on the books, such as filing charges against former abortionist Ulrich Klopfer for numerous violations he committed. Congressman Banks also said that, according to a recent poll sponsored by the Knights of Columbus, 71% of Americans want some restrictions on abortion. “The poll also found strong opposition to taxpayer-funded abortion and mail-order abortion pills,” he added. 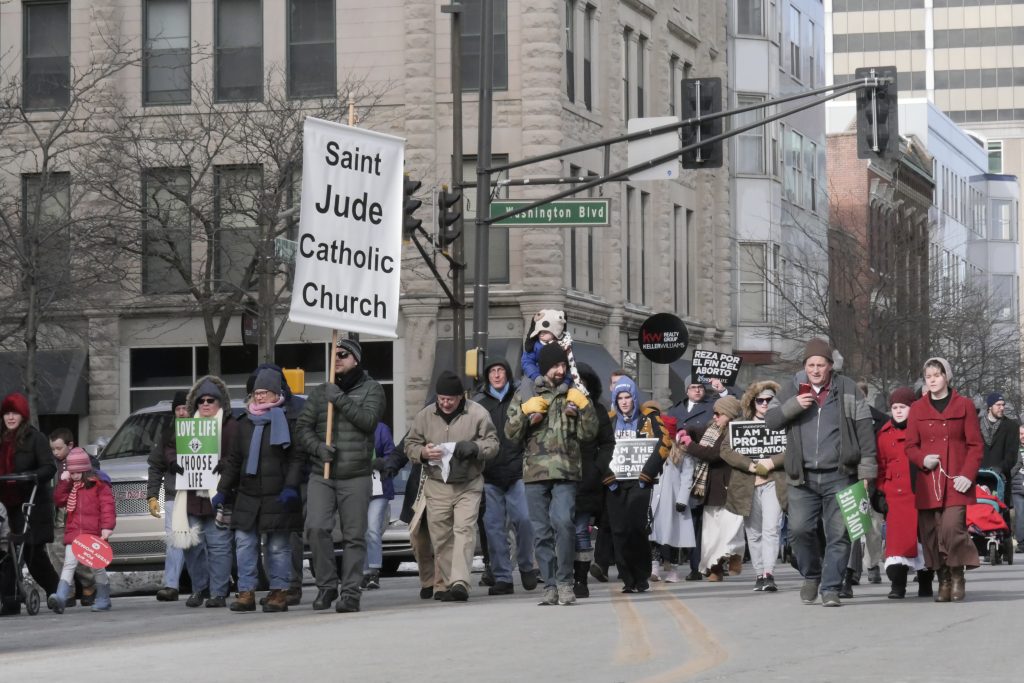 Thousands prayerfully marched down the streets of Fort Wayne. Local Catholic parishes such as St. Jude were represented by members of their community who gave of their time to pray for an end to abortion in America.

“We are the majority. The people are with us, and God is with us, and we are on the right side of history when it comes to this issue,” he said, receiving loud applause.

In a separate statement to Today’s Catholic, Congressman Banks said, “One of the things I look forward to most every year is speaking at the annual Northeast Indiana March and Rally for Life.

“This year’s march is special because there’s so much to be hopeful about. For one, a historic number of bills have passed in state legislatures nationwide to protect the unborn. If the Dobbs Supreme Court case decision is favorable – and I’m optimistic – then abortion in those states could be slashed.

“Republicans in Congress are also as unified as ever in opposing abortion as we head into the midterms, which I am also very hopeful about. So long as I’m in office, I’ll always fight to protect the unborn.” 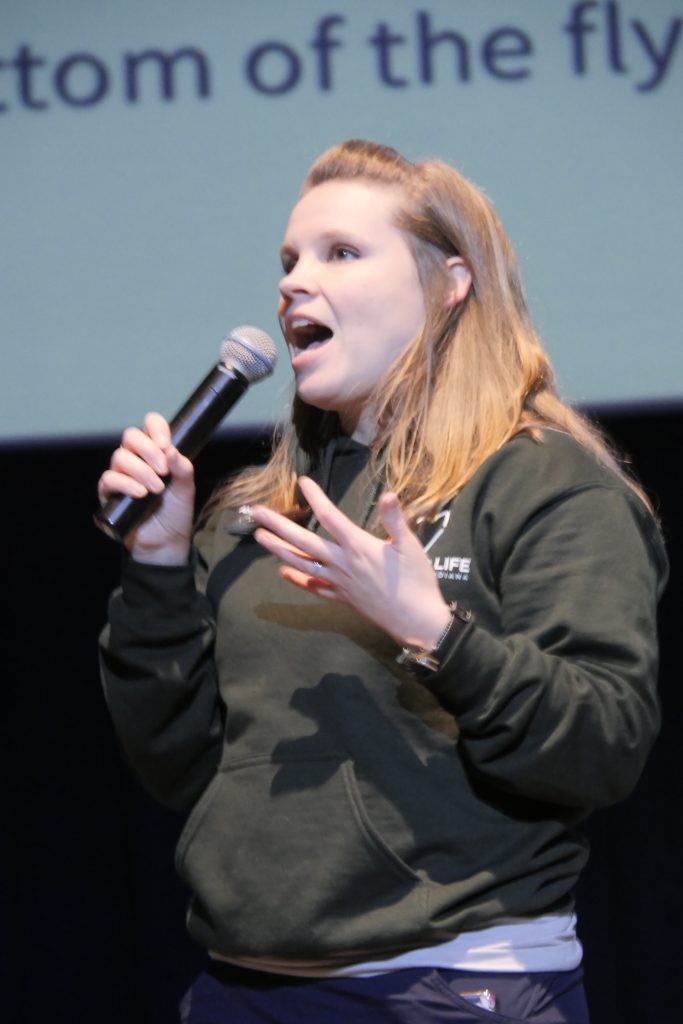 Abigail Lorenzen, operations and media director for Right to Life of Northeast Indiana, addresses the crowd at the rally about the importance of continuing to stand up for the unborn.

This year could be crucial for the pro-life movement. The Dobbs case he spoke of could become a landmark in the fight for life: Dobbs v. Jackson Women’s Health Organization. The Dobbs in this case is Thomas E. Dobbs, the state health officer in Mississippi. Jackson Women’s Health Organization is the only provider of abortion in that state, and they filed a case against the recently passed legislation which put severe restrictions on abortion in Mississippi.

“The Dobbs case is, at its core, a viability case,” said Abigail Lorenzen, operations and media director for RTL of Northeast Indiana. Viability means the gestational age in which an infant has a high probability of survival outside the womb. The state of Mississippi chose 15 weeks of gestation to ban abortion, even though that age is not currently considered viable. “They knew when they wrote the legislation and they knew when they signed it and the governor knew when he signed it that they were going at a head with Roe v. Wade, and that was their goal,” she said.

The Supreme Court has the right to take up or refuse any case that appeals to it, and Chief Justice John Roberts agreed to hear this particular one. Lorenzen said that a decision on the case will come in June, July at the latest in case of COVID-related delays.

Lorenzen said that using viability to determine when an unborn child has the right to life is ludicrous, “because it’s not based on anything but arbitrary, human development of technology.” Medical technology has pushed the age of viability back and continues to do so. The earliest recorded age an infant has survived outside the womb is around 20 weeks, with extensive medical care.

“The Dobbs case is essentially asking them to look at the way Roe was decided in the first place, to say, ‘This was completely unconstitutional to begin with, this should not exist at all, and we’re going to show that by putting the line at 15 weeks.’”

Lorenzen disclosed that the only abortion-related bill that Indiana has pending in the 2022 session of the state legislature is regarding coerced abortions, which has passed the House and is now in the Senate. She, like many others in the pro-life movement, is optimistic that Roe might be “chipped away at,” if not completely overturned, leaving abortion laws to be decided by the individual states.

Currently, the seven-county area that RTL of Northeast Indiana covers (dominated by the city of Fort Wayne) is considered an abortion desert, the second-largest in the nation. However, the Planned Parenthood clinic in Fort Wayne does refer women for abortions at other locations, and that is where RTL’s sidewalk counselors can have an impact on the lives of pregnant women and the unborn.

One area that Lorenzen believes the pro-life movement has made significant progress in is the treatment of women seeking abortions. She said that the majority of these women are pushed into that decision by someone else or misled by the abortion industry itself. Often, once they leave the clinic, the realization of what they did hits them, along with remorse for their actions. “They obviously need our compassion, they need healing, they need forgiveness; they don’t need condemnation and all of this really angry talk that we sometimes hear outside of abortion clinics.” 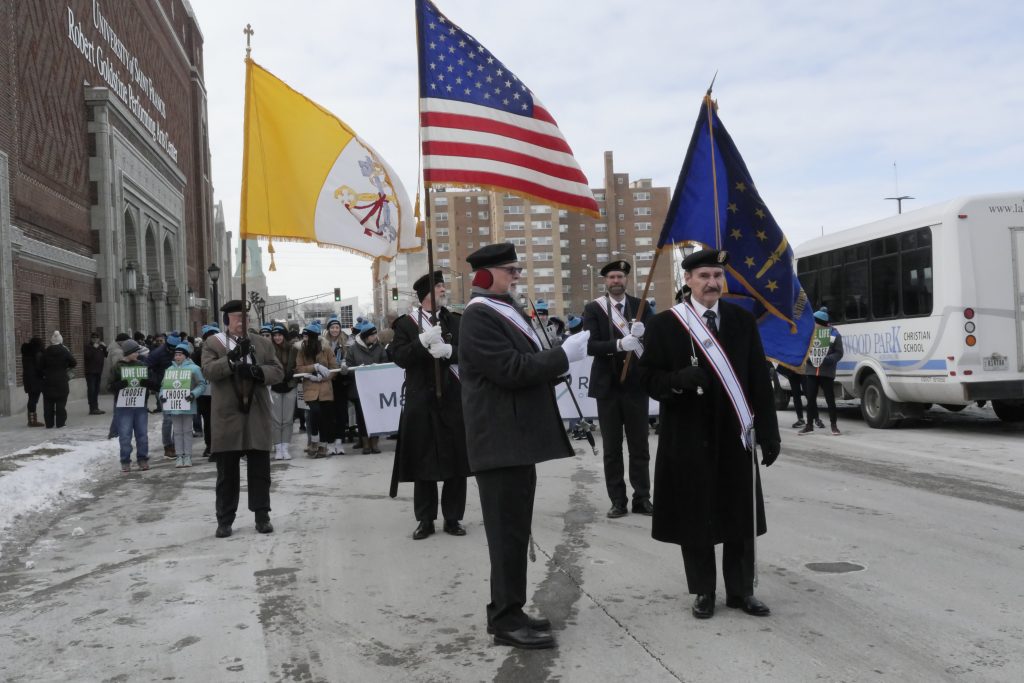 The below-freezing temperatures kept some of the usual marchers from attending, but many others braved the cold, including some first-time attendees, such as Brooks Gray, a recent graduate of Bishop Dwenger High School. He has attended two previous national marches in Washington, D.C. and said, “We march because everyone deserves to have a chance at life. That’s the real reason.” 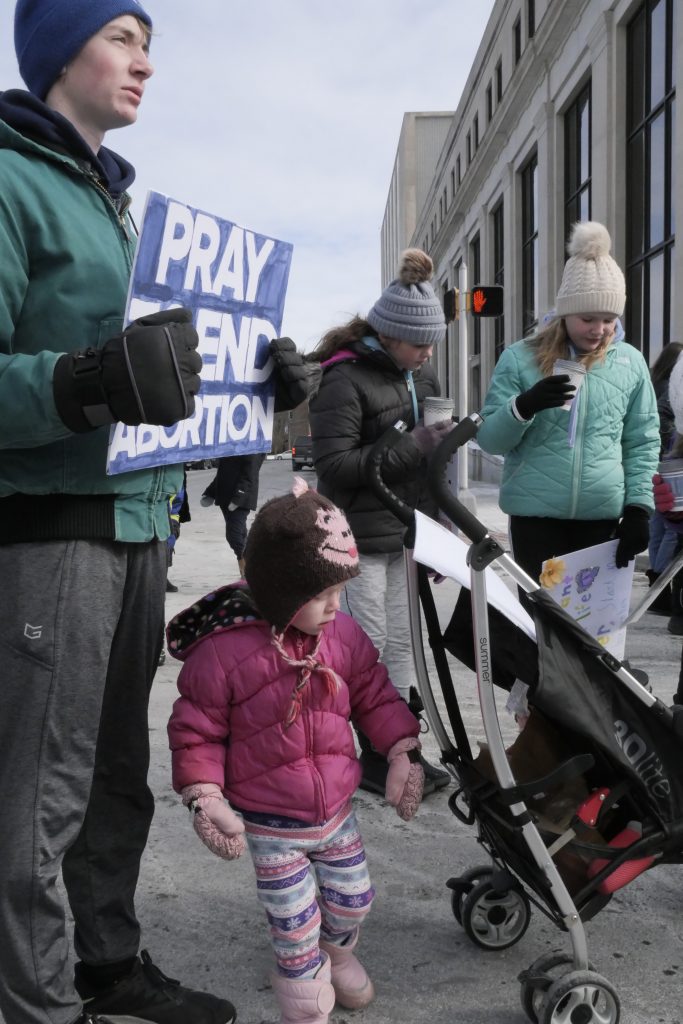 Many young families braved the cold to honor the millions of babies lost to abortion each year.

Father Luke Okoyo, parochial vicar at St. Elizabeth Ann Seton in Fort Wayne, also made time to attend his first march since arriving from Nigeria last summer. Alongside a group of his parishioners, he was proud to prayerfully march to support the unborn.