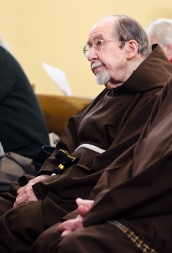 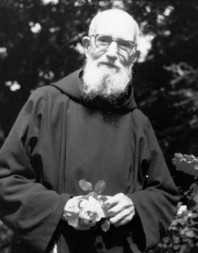 Capuchin Father Solanus Casey is pictured in an undated file photo. Admirers of Father Casey, a doorkeeper at Franciscan houses in New York and Detroit, are hoping for his beatification. In 1995 he was declared venerable, one of the first steps toward canonization.

DETROIT — Some say that Capuchin Brother Leo Wollenweber is a saint himself. The 94-year-old brother, who has enjoyed 71 years of wearing the Capuchin habit, has spent years as the vice postulator of the Father Solanus Casey sainthood cause.

The task of working on Capuchin Father Solanus’ sainthood cause is a ministry Brother Leo accepted over 30 years ago.

Shortly after the death of Capuchin Father Solanus in Detroit on July 31, 1957 at the age of 86, “many of the lay people in Detroit who had known Father Solanus and benefited by his prayers and help, wanted to preserve his memory,” Brother Leo told Today’s Catholic in his Detroit office at St. Bonaventure Monastery.

The Detroit people “petitioned the friars here to start what is known as the Father Solanus Guild as an organization of people who would try to spread information about Father Solanus and his holiness of life,” Brother Leo said.

After about nine years of urging from the people, Brother Leo said, “They had finally persuaded the Capuchin superiors here to send a report to our Capuchin superior in Rome about Father Solanus. …So that is when the order set up the process to have him declared a saint.”

Getting to know Father Solanus

“We know more about Father Solanus today than we did when he was alive,” said the quiet-spoken brother at the interview while pilgrims from Fort Wayne and Huntington visited the Father Solanus Center.

Brother Leo, who knew Father Solanus as a friar at St. Bonaventure from 1940-1945, was eager to share the life of Father Solanus, who also lived in Huntington at the St. Felix Monastery from 1946-1956. The former St. Felix monastery has recently been renovated and used as a retreat center and soon a portion of the center will be used for postulant formation of the Sisters of Mary Mother of the Eucharist.

Brother Leo said of Father Solanus, “He was a very prayerful person, but he was very ordinary in a way. He had a good sense of humor. He was very interested in people and people came to him from all walks of life with their problems.”

Brother Leo said Father Solanus was especially interested in people who came from farms because Solanus had grown up on a farm.

Father Solanus enjoyed children, and coming from a large family of 16 children — 10 boys and six girls — the boys had their own baseball team. Father Solanus was the catcher.

“When he was in Detroit, he took quite an interest in the Detroit Tigers,” noted Brother Leo. “On occasion, when he was in Huntington, he used to get many calls from people all over — especially from Detroit, people asking for prayers and so on — and one evening, quite late, almost midnight, a man had called and asked for prayers for his wife who was very sick. And after he told Father Solanus his problem … Father Solanus told him, ‘Well don’t worry, she’ll be alright.’ And then he added, ‘Then tell me now, how are the Tigers doing?’”

“(Father Solanus) had great faith in the efficacy and power of the Mass,” Brother Leo said.

When Father Solanus celebrated Mass, “he was very recollected, attuned to the Mass, and had a great love for the Blessed Sacrament.”

After spending a long day at the office counseling people and listening to their problems, oftentimes “in the evening hours after the office closed (Father Solanus) would spend more time in the chapel before the Blessed Sacrament praying for all the people who had come to him that day,” Brother Leo said.

“He also recommended devotion to Our Blessed Mother. The holy rosary was a favorite devotion of his,” Brother Leo said, adding that Father Solanus’ custom while traveling would be to recommend recitation of the rosary.

In search of miracles

The postulator general of Father Solanus’ sainthood cause is located in Rome,” Brother Leo said, while the vice postulator is the local investigator.

Various friars in the order were approached at that time to be the local investigator, including Brother Leo. He became the vice postulator in 1974.

Brother Leo is in search of miracles, looking for reports of healings where there is no medical explanation.

Brother Leo said they get many reports, “but it’s hard to get enough documentation from doctors that would be proof that the healing was not due to any medical procedure or operation, and it comes through the intercession through their prayers asking Father Solanus’ help from heaven.”

It’s not the saint that works the miracle, Brother Leo noted, “the miracle comes from God.”

“We have many cases that look like they may qualify as a miracle,” Brother Leo said. However, he reports that no case has been approved by the doctors associated with the Congregation for the Causes of Saints in Rome.

Father Solanus is declared “venerable,” which means the Church says he lived a life of heroic virtue, and that he is in heaven and interceding for us, “but the Church, still does not, at that point, permit what is called ‘public devotion,’ the kind of devotion we give to the saints — having a church, for instance, dedicated in their memory or have a Mass said in their honor. For that, the Church waits for a miraculous intervention — either a ‘blessed’ or ‘saint,’” he said.

The difference between a “blessed” and a “saint,” noted Brother Leo, is “when a person is declared ‘blessed,’ the public devotion that is allowed by the Church is limited to the locality — perhaps the country the person is from or the order they belonged to.  … After a person is declared ‘blessed,’ if devotion continues and other miracles occur, if at least one more miracle occurs, then the Church would declare the person canonized, a ‘saint.’ When a person is canonized a saint then the devotion is universal throughout the Church, all over the world.”

Brother Leo hopes that the beatification will happen soon. The bishops of Michigan hope that 19th-century U.S. Bishop Frederic Baraga of Marquette, Mich., and Father Solanus will be beatified around the same time.

Brother Leo said they have already checked out Ford Field as a possible spot for the beatification Mass.

Father Solanus Casey was born Bernard Francis Casey on Nov. 25, 1870 on a farm near Oak Grove, Wis. He was invested in the Capuchin Order at Detroit in 1897 and given the religious name of Solanus.

After his ordination in 1904, besides living in Huntington, Father Solanus spent 20 years in New York, Harlem and Yonkers. In 1924 he was assigned to St. Bonaventure Monastery in Detroit where he worked for 20 years. He ministered many of those years as a door porter.