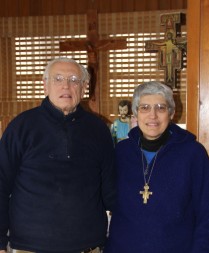 FORT WAYNE — In a small yellow home on Fort Wayne’s eastside live Madeline and James Nugent, who follow the Rule of 1221 and live their lives “privately and quietly” in a “penitent’s lifestyle.” The Nugents belong to the Confraternity of Penitents, a private association of the faithful with commendation under Bishop Kevin C. Rhoades.

Madeline described the penitents’ lifestyle as more prescriptive than the Third Order of Secular Franciscans of today. The penitents following the Rule of 1221 are prescribed what they can wear, what prayers to say and when to say the prayers, for example.

The Nugents will testify that the goal of this Rule of Life is to bring those who live it closer to God and more peacefully conformed to God’s will.

“We have people who are living this Rule of Life from all different walks of life,” Madeline told Today’s Catholic in an interview from the Nugents’ Fort Wayne home. “We have single young people to old married people to people that have families with small children, and some people who are caring for elderly people, people who have full-time jobs, people who are retired,” Madeline said. “Each one of them is going to live their life a little differently because they are lay people in the world.”

Madeline is the minister general in the Confraternity. She assembles the newsletter and oversees the administrative aspect of the Confraternity, which is based in Fort Wayne. She has written books for Pauline Books and Media, Catholic Book Company and New City Press. In researching the life of St. Anthony of Padua for a book, she found her path to the Rule of 1221.

“So I blame it on St. Anthony,” Madeline quipped. “If I hadn’t done that book on St. Anthony, I wouldn’t have known what that Rule of Life was.” That was in 1994, and since that time, James, a recently retired chemistry professor from Salve Regina University in Rhode Island, also has chosen the penitent’s lifestyle. The couple recently relocated from Rhode Island to Fort Wayne.

The Nugents have five adult children, including one daughter who is a Capuchin Sister of Nazareth in Pennsylvania, and four grandchildren.

None of their children are penitents, but the children accept their parents’ lifestyle. “They didn’t even know I was doing this for a number of years,” Madeline said, even though they lived under the same roof. “They found out about the food part just a couple years ago.”

People interested in adapting to the penitents’ lifestyle will go through four years of formation.

“When someone comes to us to join, they go through a three-month process of inquiry,” Madeline said. “Then they have six to 12 months of postulancy where they kind of get into the Rule a little bit.”

“They do little parts of the Rule, but not anything too difficult,” she added. “They start to wear a cross or crucifix or they will go to Confession once a month. They will do a morning and evening examination of conscience during the month.”

In the years of novice training, the penitents learn the lifestyle “a little bit at a time” and then slowly build the practices over three years.

Madeline said a first-year novice has a prayer option that he or she can select: one is praying a full Liturgy of the Hours — that’s praying seven times a day from a breviary, a book which many religious use for daily prayer. Or the penitent may pray Morning, Evening and Night Prayer and a 15-decade rosary; or Morning, Evening and Night Prayer and an hour of mental prayer; or in the situation of parents with small children, with their spiritual director’s permission, they can calm themselves down and lift their minds and hearts to God during the day and use that as a prayer option.

“The way you do your prayer option differs according to your state in life,” Madeline said.

Fasting and abstinence are part of Novice 2 formation, which is actually the third year of formation.

“We eat meat only on Tuesdays, Thursdays and Sundays. That is part of the penance, unless it falls on Christmas, an octave or one of the solemnities,” Madeline said.

“Meatless days are the other days of the week,” she said. “We have a period of fasting according to the Church fast from the day after the feast of St. Martin (Nov.11) until Christmas — we observe a Lenten-like fast before Christmas. Then we observe the Lenten fast from Ash Wednesday until Easter, but we fast the way we would on Good Friday all the days (of Lent) — one full meal, one small meal and, if one needs it, a small bite to eat. … You don’t eat solids between meals. And the amount that you eat is according to your body weight.”

There are exceptions to the fasting, Madeline noted — for example, if a woman is pregnant or breastfeeding, or if a person has diabetes or a medical condition, “then you can do penance in another way,” she said.

The third year of novice formation is the simplicity of possessions and clothing.

“We follow the original Rule, which talked about un-dyed clothing of humble quality,” she said. “The only fur that they would use is wool.”

Clothing color options would be solids of grays, browns, shades of whites, creams, tans and blacks. Prints are not used.

“The clothing is not a habit, though,” James emphasized.

“You’re not supposed to wear the same thing every day,” Madeline said, “so people don’t realize you are doing penance in that area.”

In the Novice 3 formation, “You’re also supposed to go through and simplify the possessions that you have, so you don’t have more stuff than you really need to have,” Madeline said.

“You try to simplify it down,” she said, “but that doesn’t mean you can’t have a car, you can’t have a computer. We have all those things. We just ask people not to have something that they really don’t need to have.”

Noted historical penitents include St. Elizabeth, Queen of Hungary, King Louis IX and St. Thomas More. Although they had riches and wealth, they were able to simplify their lifestyle. “They lived the Rule but they did it according to their state in life,” Madeline said.

In Fort Wayne, the local chapter, Our Lady Cause of Our Joy Chapter of the Confraternity of Penitents, has 12 to 15 penitents. They meet on a Sunday once a month from 2-4 p.m. There are also many isolated members throughout the world who stay connected through email, postal mail and telephone. Only two people are needed to start a group.

The website, www.penitents.org, offers in depth information on the Rule and the Constitutions. Those interested would need to see if they think, “I would really like to live this way,” Madeline said. Even if living the Rule has appeal but they don’t think they can do it, Madeline encouraged them to still inquire. She said that, when she felt called to live this way, she was “positive she wouldn’t be able to do it.”

If an individual feels the Holy Spirit is asking him or her to inquire, then he or she should give the Nugents a call, Madeline said. The number is (260) 739-6882. Or they can email either of the two emails at www.penitents.org.