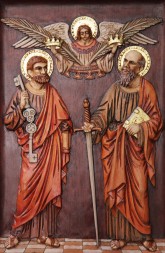 A Peruvian relief sculpture depicts Sts. Peter and Paul. The Catholic Church commemorates the martyrdoms of both apostles with a June 29 feast.

This Sunday we celebrate the Solemnity of the Saints Peter and Paul, the Princes of the Apostle and the Pillars of the Church. We remember their faith, the faith that has come down to us, the Churchâ€™s unchanging faith in the one Simon Peter confessed to be â€śthe Christ, the Son of the Living God.â€ť

Peter was the first to profess that Jesus is the Christ, the Son of God. Paul spread this profession to the Gentiles, throughout the Greek and Roman world. The Church first received the faith through the preaching of the Apostles Peter and Paul. Both ended their missionary lives in Rome, the center of the empire, where they poured out their blood for the faith. On June 29th, we remember their martyrdom. Consumed by love for Christ and His Gospel, Peter and Paul fulfilled their apostolic mission and made the field of the Church fertile with their blood.

The lives of Saints Peter and Paul show us the great power of Godâ€™s grace. As human beings conscious of our own weaknesses, we can identify with their failings. Peter had denied Jesus three times. Paul had persecuted Jesus by persecuting His Church. Both experienced, by Godâ€™s grace, a deep conversion to the Lord.

Peter repented and wept bitterly for his sin of denial. The Holy Spirit strengthened him to declare to Jesus three times that he loved Him. Jesus then gave him the mandate to tend His sheep. Jesus gave Peter the primacy as the Rock of His Church.

Paulâ€™s conversion is well-known. On the road to Damascus, Jesus called him and radically transformed him. The persecutor of the newborn Church became the tireless Apostle of the Gentiles. God gave him the grace of belief in the mystery of the redemption accomplished in Christ.

Saints Peter and Paul teach us the power of conversion and are models for us of trust in divine grace. The Lord delivered them both from their sins. And He delivers us when we turn to Him for forgiveness.

As apostles, Peter and Paul faced many difficulties and a lot of suffering. They faced these hardships with trust in God and His love. Their trust wasnâ€™t focused on themselves or based on their own resources, but on the grace of the Lord who gave them courage in their mission. Saint Paul wrote to Timothy: The Lord stood by me and gave me strength. This must be our conviction as well. Saints Peter and Paul teach us to trust that the Lord stands by us and gives us strength in our daily lives of faith. This is especially important to realize when we face difficulties and trials in our lives.

On July 13th, we will begin our 33 days of spiritual preparation for the Marian consecration on August 15th. Reflecting on the faith of Saints Peter and Paul, we are also reminded of the faith of the Queen of the Apostles. The faith of the princes of the apostles, confirmed by their martyrdom, is the same faith as that of Mary, the Mother of the Church. This is the same faith we proclaim, profess, and strive to live. The Marian consecration is a means that the Church recommends to deepen our faith in Jesus, the Savior of the world.

I conclude this column with words from the Preface of this Sundayâ€™s feast:

Lord, by your providence the blessed Apostles bring us joy: Peter, foremost in confessing the faith, Paul its outstanding preacher; Peter, who established the early Church from the remnant of Israel, Paul, master and teacher of the Gentiles that you callâ€¦ each in a different way gathered together the one family of Christ; and revered together throughout the world, they share one Martyrâ€™s crown.

Saint Peter and Saint Paul, pray for us!