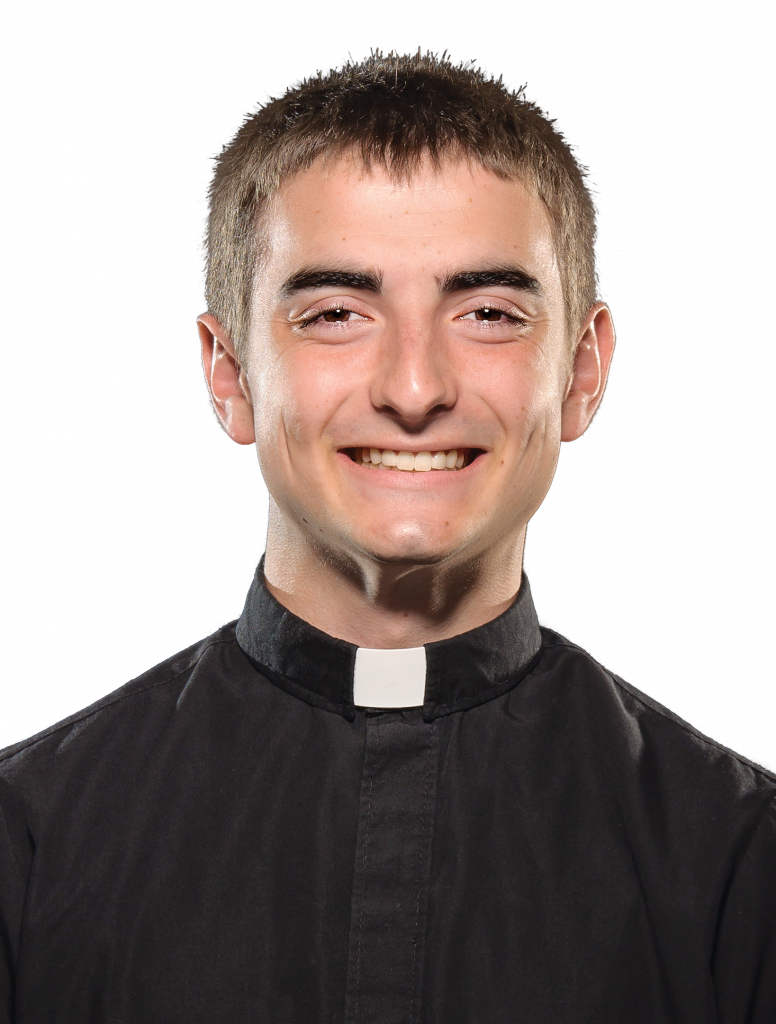 A simple appeal to pray daily began the call to the priesthood for Logan Parrish.

Very sports-oriented while a student at Bishop Dwenger High School in Fort Wayne, he was involved in cross-country, rugby and wrestling. In the fall of his sophomore year, Parrish felt a change in his spiritual life during a retreat at his home parish of St. Vincent de Paul. “At the end of the retreat, one man said, ‘you guys should pray every day’ and it just seemed so reasonable that I thought ‘OK, I guess I could do that.’ So I started praying a decade of the rosary every day in the chapel at Dwenger.”

From that first step, he began inviting friends to spend time with him saying a decade of the rosary before lunch. That was the beginning of the school’s Decade Club. By the end of his senior year, Parrish stated that 70-90 students would come to pray before the three lunch periods.

This time of prayer brought immense joy to Parrish. “That sort of devotion and fostering of love for the Lord was beautiful.”

During his senior year, then-chaplain Father Jacob Meyer began asking the school’s altar servers if they had ever considered seminary and said they should follow any perceived call if they felt even the slightest nudge. Parrish joked, “I think I received an application like four times,” including one from Bishop Kevin C. Rhoades. “I was really running from it, if anything,” Parrish recalled.

Although he had strongly considered applying to seminary his senior year, he also began to date a girl he had met at a retreat. That relationship carried into his first year at Holy Cross College. “I was still pretty set on marriage, really happy with this woman, and it was a very healthy relationship.” So when he met with her to attend Mass together during a break from college, a breakup was the last thing he had expected.

While driving home afterward, he felt a nudge to go to the Mary alcove at St. Vincent. So he stopped at church and knelt before the statue of Mary. There he gave Mary not only his joys, but the pain of his breakup.

When he finished his rosary, the weight was lifted from him.

“I’ve heard it said that the Lord takes our good to give us better,” Parrish reflected. “That really rings true. Never could I have imagined a better candidate for motherhood, a woman that I would have desired to start a family with — that image of marriage. Never would I have thought that the Lord would have wanted to give me something better than that.”

But He did. That summer, the call to priesthood returned, greater than before. On a hike in Vermont with a friend, Parrish was praying his rosary when the realization hit him that he had pushed seminary to the back burner for too long. Parrish emphasized that he was not looking for a replacement for his previous relationship, nor was he running to the seminary as a means of escape. He was finally following God’s calling.

He transferred from Holy Cross to Mount St. Mary’s Seminary in 2015, two years after graduating from Bishop Dwenger. The friendships he had made in high school stayed with him, and whenever he saw them he spoke to them about the seminary, urging some to reconsider the vocations they had felt called to in high school. Three of those classmates are now at seminary with him and another is preparing for religious vows.

Crucial to discernment is the people one surrounds themselves with. The friendships fostered on the sports teams and in the chapel at Bishop Dwenger were the same ones that helped Parrish recognize his vocation to the priesthood. He imparts this wisdom to young men when visiting schools, pointing out that who they spend their time with is equally as meaningful as how they spend their time.

His parents, Bill and Mary Jo Parrish, are supportive of his vocation and eager to attend his ordination to the diaconate June 6 at St. Vincent de Paul Parish. Parrish is the oldest of 10 children, and the spiritual growth that he has witnessed within his own household over the years impacted him deeply, he said — particularly watching his father’s faith journey.

Many holy men influenced Parrish throughout his life. He particularly credits “the energy and invitation of Father Jacob (Meyer),” the “stability” and priestly image of Msgr. John Kuzmich and the holiness of former Bishop John M. D’Arcy in helping him to make his decision.

Parrish is deeply drawn to the fatherhood aspect of the priesthood. His devotion to St. Joseph as spiritual father and the examples of other young priests give him a greater desire to become a spiritual father to young people. “Certainly, the means of fatherhood is the sacraments, but I think that as Father Daniel (Scheidt) says, ‘You can’t get any title better than father.’”