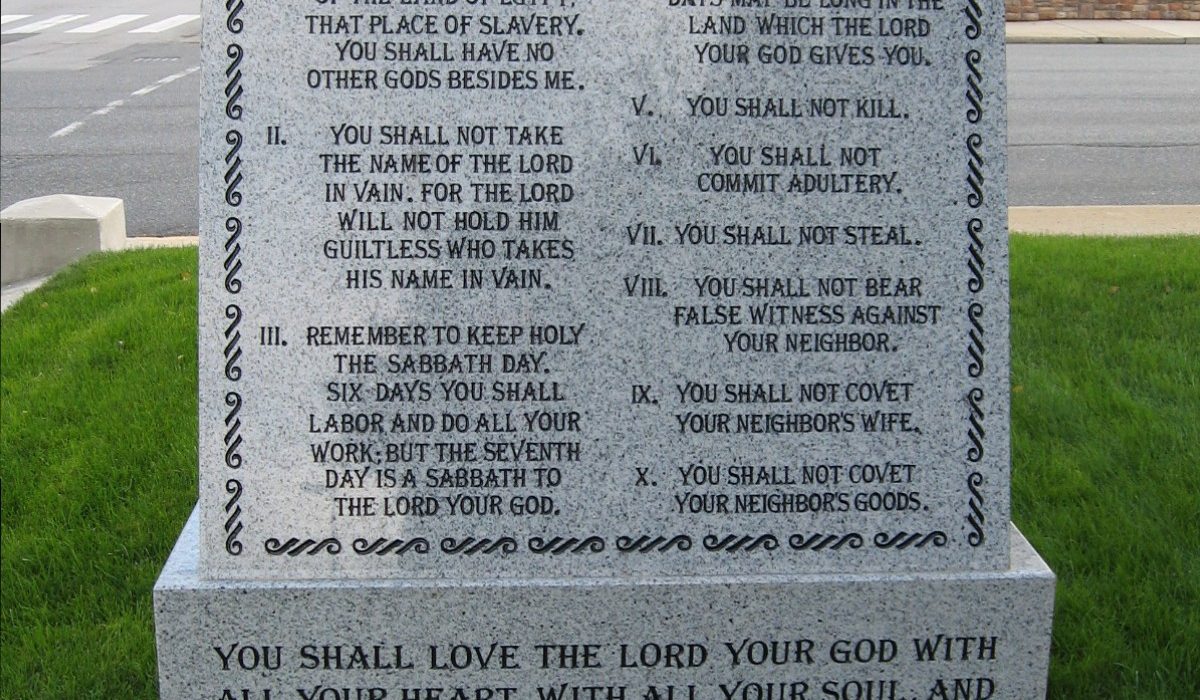 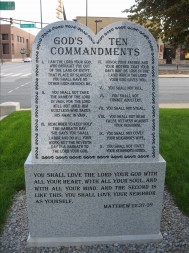 The Ten Commandments are on display at the Cathedral of the Immaculate Conception, Fort Wayne and was sponsored by the Knights of Columbus.

The Ten Commandments are truly a gift to us from God. In truth, God engraved the Ten Commandments in our hearts from the beginning. They express the requirements of the natural law. Though the Ten Commandments can be known by human reason, God chose to reveal them specifically since original sin has clouded human understanding. One of the effects of original sin is that human nature is now subject to ignorance. We can be thankful that God has made His will known to us through His revelation of the Decalogue on Mount Sinai.

When I visit our Catholic school religion classes and our parish religious education programs, I am glad to see our children memorizing the Ten Commandments and learning about the meaning of each. This instruction is very important for their moral formation. Through the Ten Commandments, we learn right from wrong and our obligations to God and neighbor. For many centuries, the teaching of Christian morality has followed the order of the Ten Commandments.

Jesus not only acknowledged the Ten Commandments, He went more deeply into them, especially in His Sermon on the Mount. Jesus unfolded all their demands. For example, within the prohibition of killing that is the fifth commandment, our Lord calls us also to avoid anger and malicious speech. Christian morality, life in Christ, is more than external conformity to the law. It touches the inner person, our attitudes and thoughts. Jesus gives us the twofold commandment, love of God and love of neighbor, according to which all the commandments must be interpreted and conformed.

It is significant that God revealed the Ten Commandments to humanity during the Israelite Exodus from Egypt. God gave the people His law after freeing them from slavery. It seems logical since God did not want His people to become slaves again, in other words, slaves of sin.  Actually, spiritual slavery is even worse than physical slavery. So God gave us the Ten Commandments to make us free! This goes against the opinion held by some who think of the Ten Commandments as oppressive or even of Judaism and Christianity as oppressive religions because of their laws and norms. The opposite is actually the case. The more obedient we are to God and His commandments, the freer we are. God’s commandments help free us from selfishness and liberate us from egoism. We can look at each single commandment and see how obedience to that commandment helps us to avoid vices that might enslave us and bring misery to our lives. The Ten Commandments, together with Jesus’ Sermon on the Mount, show us the path of life. We don’t walk this path alone. We are united with Jesus our Redeemer, who, through His Spirit, guides us to keep the commandments.

The Ten Commandments are permanently valid. They don’t change. They express serious obligations, not mere suggestions. May these commandments not only be on our lips, memorized words, but words that illumine our hearts and minds. In this Lenten season of conversion, may the Ten Commandments help us to stay on the right path or return to it: the path of life, the way of Jesus.