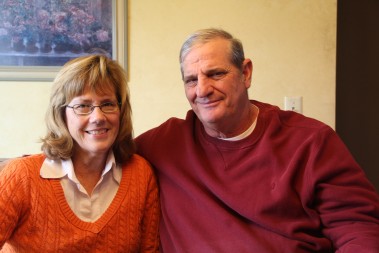 Carol and Charlie Bowers are life-long parishioners of St. Mary of the Assumption Parish in Decatur where they donate a portion of their grain harvest to the church each year.

MONROE — St. Mary of the Assumption Church in Decatur has been the grateful recipient of the generosity of its faithful parishioners’ time, talent and treasure for over 175 years. One particular donation, unique to the traditional tithe of monetary resources the church enjoys, is the gift of grain from its rural faith community. One farm family feels it’s the natural thing to do.

Charlie and Carol Bowers farm 34 acres in rural Adams County where they plant and harvest fields of wheat, soybeans and corn. With each harvest they thank God for His bounty. “We’re thankful for everything we have,” says Carol.

About four years ago the Bowers learned from a business associate that farmers of different faith denominations in the area donated a portion of their grain harvest to their church. The unique seed of giving that had been planted took root and that year at harvest time the Bowers donated the grain of a three-acre patch of their farm to St. Mary’s where they have been life-long parishioners.

The grain donation is above and beyond their weekly tithe to the church that has nourished their faith since infancy. And according to St. Mary’s Business Manager Judy Converset, the Bowers’ donation is distinctive in that the grain is taken to the area grain elevator where it is relinquished to the church. “We were contacted by the grain company and had to sell the grain ourselves,” says Converset.

After being contacted by the grain company St. Mary’s instructed the company to put the grain on the commodity market and thereafter received the proceeds, which were added to the general church fund. “It goes to pay the bills. We count on that income,” says Converset.

Though most years the Bowers’ grain donation is incorporated into the general fund, one year Charlie directed the church to add it to St. Mary’s roof fund. “They were doing that construction at harvest time and I told them they could use it there,” he says.

Faith is the driving force in the lives of the Bowers. After living 35 years on their beloved farm in a deep abiding 41-year marriage that has produced four children and 14 grandchildren, the Bowers feel the grain donation is “giving back to God.”

Charlie believes that everyone has gifts and talents to share with others and says, “It’s like a musician who plays his music at church. I farm and so I give my grain to God.”

Though donating grain felt strange in the beginning, Charlie says, now it’s a way of life.

“Farmers put the seed out and it brings forth — you reap what you sow,” he says, adding, “My dad always said, ‘He (God) will give you what you need.’”

“You put the seed out there and then someone else is in control,” says Charlie thoughtfully.

Charlie agrees saying, “Faith in the coming forth.”

“That,” adds Carol finishing her husband’s thought, “but also faith to keep going every year. There’s something about working the earth.”

Even as Charlie admits that there have been a few difficult years when his harvest was slim he revisits his father’s faith-filled counsel that reminds him, “He’ll (God) take care of you. … It’s a win-win deal for everyone.”