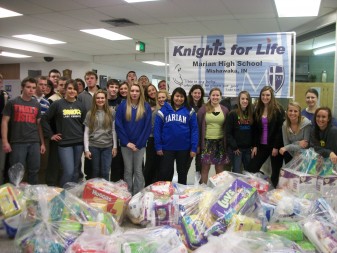 Marian High School right to life members stand with the diapers collected during the “Diaper War” with Saint Joseph’s High School that they will deliver to Women’s Care Center in South Bend.

SOUTH BEND — The second annual “Diaper War” between Marian and Saint Joseph’s high schools was held Friday, Feb. 24. The students collected diapers to be donated to the Women’s Care Center.

“Last year, between both schools, we collected a three-to-four month supply for the Women’s Care Center,” said right to life teacher and co-moderator Tom Dlugosz from Marian High School. “We are so happy to do this; we are committed to supporting their efforts to help women and their children.”

The students who bring diapers in on collection day get to enjoy a “dress down day,” and the right to life group advertises the collection day through posters and announcements for a couple of weeks to help get the word out.

“It’s a fun competition between the schools, but in the end it’s really about how many diapers we collect to help women in our community,” said senior Ellen Nagy, one of the officers of the Marian High School Right to Life group.

Another officer, senior Jenny Seng agreed saying, “We have a really active group here at Marian. When I joined it was a lot of seniors only. Now we have a lot of freshmen and sophomores and have about 50 members. This event has great student support for a great cause.”

Both schools have energetic right to life groups and actually stayed at the same hotel in Washington, D.C., in January when they traveled to the annual National Right to Life March at the capital. “The kids got to hang out and get to know each other. It was really nice,” said Dlugosz.

The gathering and counting of the diapers are done by the right-to-life student members. Then the diapers are bagged and delivered to the Women’s Care Center by the administrations. The winner of the diaper war is announced during the annual basketball game between Marian and Saint Joseph’s. This year that game took on special significance as it was the last game played at the Saint Joseph’s Alumni Gym.

“We may be rivals on the court,” said Marian Principal Carl Loesch, “But we are friends off the court and we are honored to join efforts with Saint Joseph’s to support this great organization.” Marian went on to win the basketball game over Saint Joseph’s, 64-49.

Saint Joseph’s won the diaper war last year, but it was a double victory for Marian this year, which collected 26,794 diapers. In total the schools donated 49,764 diapers.

“We are so thankful to our students’ generosity to Women’s Care Center,” said director of development at Marian, Alicia Redinger.

“We distribute, free of charge, hundreds of thousands of diapers each year. We are always in need of additional contributions to fill this tremendous need. It is a blessing that the students of Saint Joseph’s and Marian put their hearts and souls into this friendly competition each year. Their efforts are truly pro-life “in deeds” … and not just words. Our volunteer President Ann Manion and I are especially grateful to Principal Carl Loesh and Principal Susan Richter for their incredible support and leadership as well,” said Williams.