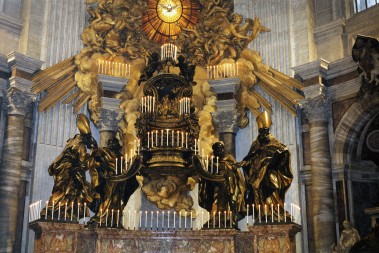 Gian Lorenzo Bernini’s sculpture, “The Throne of St. Peter,” is adorned with candles for the celebration of the feast of the Chair in St. Peter’s Basilica at the Vatican Feb. 19, 2012 The candles and special liturgical vestments decorating the statue of St. Peter added to the celebration as Pope Benedict XVI concelebrated Mass with 22 new cardinals in the basilica.

February 22nd is the Feast of the Chair of Saint Peter the Apostle. This year, we celebrate this feast just six days before that Chair becomes vacant. With gratitude and love, we pray for our Holy Father, Pope Benedict XVI, as he ends his Petrine ministry on February 28th.

The Chair of Saint Peter symbolizes the special mission of Saint Peter and his successors, the popes, to shepherd Christ’s flock, keeping the Church united in faith and charity. It signifies also the teaching authority of the Pope. Already in the first decade of the second century, Saint Ignatius of Antioch attributed a special primacy to the Church in Rome which he called the Church which “presides in charity.” The Pope is the Bishop of Rome and, as such, the Pastor of the universal Church.

In the apse of Saint Peter’s Basilica, there is a great bronze throne sculpted by Bernini. It encloses a wooden chair from the ninth century, long thought to be Peter’s own chair. This “chair of Peter” is supported by four statues of great Fathers of the Church (Saints John Chrysostom, Athanasius, Ambrose and Augustine). Above the throne is an oval window, surrounded by angels, with the image of the Holy Spirit in the form of a dove. The symbolism of this great work of art is clear: the Holy Spirit guides the Church through Saint Peter and his successors, who authoritatively teach the Word of God transmitted in Sacred Scripture and Tradition.

We have been truly blessed these past eight years by the pontificate of Pope Benedict XVI. He has led the Church in faith and charity. He was 78 years old when he was elected Pope on April 19, 2005, but his age did not prevent him from exercising his Petrine ministry with great zeal. Just months after his election, he went to World Youth Day in Cologne, Germany. His presence and his words inspired the hundreds of thousands of young people on that occasion and also later, at the World Youth Days in Sydney, Australia, and Madrid, Spain. I will always remember the latter two World Youth Days which I was blessed to attend.

I met Pope Benedict in Rome during my first year as a bishop in 2005, on two occasions in 2007, during the canonization of Saint Andre Bessette in 2010, and finally one year ago, during my ad limina visit to Rome in 2012. I also concelebrated three Masses with the Holy Father and my brother bishops during his 2008 visit to Washington, D.C. and New York City. These are all great memories that I will keep in my heart. Pope Benedict’s warmth, gentleness, and Christ-like spirit touched me on each occasion.

Asked often in recent days about the legacy that Pope Benedict leaves the Church, I answer immediately “his teaching.” A brilliant theologian since the days of the Second Vatican Council, Pope Benedict’s teaching as Pope reveals a lifetime of prayerful study of the Word of God and remarkable theological scholarship. So many of us have been enriched by the Holy Father’s hundreds of beautiful homilies, audience talks, and speeches these past eight years. His three encyclicals offer profound reflections on Christian love, Christian hope, and on charity and truth as the heart of the Church’s social doctrine. His apostolic exhortations on the Eucharist (Sacramentum caritatis) and on Scripture (Verbum Domini) are also great documents for prayerful reflection. Pope Benedict’s teaching ministry, I believe, will long be remembered and will continue to help many to grow in their knowledge and love of the Lord.

As we celebrate the Feast of the Chair of Saint Peter, we remember the words of Jesus to Simon at Caesarea Philippi: You are Peter, and upon this rock I will build my Church, and the gates of the netherworld shall not prevail against it. I will give you the keys to the Kingdom of heaven. Simon became Peter, the rock that prevails against the destructive forces of evil. Jesus gave him a unique mission as the leader of the Twelve, a mission passed on to the Pope who heads the College of Bishops, the successors of the apostles. He gave Peter and his successors “the power of the keys”, that is, “the authority to govern the house of God, which is the Church” (CCC 553).

At Mass on the Feast of the Chair of Saint Peter, we pray in the Collect:

Grant, we pray, almighty God, that no tempests may disturb us, for you have set us fast on the rock of the Apostle Peter’s confession of faith. Through our Lord Jesus Christ, your Son, who lives and reigns with you in the unity of the Holy Spirit, one God, forever and ever.

For a few weeks, the Chair of Peter will be vacant. This will be an important time for all of us to pray for another holy successor of Saint Peter. The Roman Missal contains a special Mass for the Election of a Pope that contains the following Collect:

O God, eternal shepherd, who govern your flock with unfailing care, grant in your boundless fatherly love a pastor for your Church who will please you by his holiness and to us show watchful care. Through our Lord Jesus Christ, your Son, who lives and reigns with you in the unity of the Holy Spirit, one God, forever and ever.

Let us continue to remember Pope Benedict in our prayers and also pray for the Cardinals who will gather in conclave to elect a new Pope. We do so with confidence that the Lord has built His Church on the rock of Peter’s confession of faith and that the gates of hell will not prevail against it. We know that Jesus, the Good Shepherd, never leaves his flock untended. He continues to govern His Church through Peter and the other apostles, who are present in their successors, the Pope and the College of Bishops. Christ continues to pour out the Spirit to build, animate, and sanctify His Body, the Church.

May the Blessed Virgin Mary, the Mother of the Church, watch over Pope Benedict and intercede for the Cardinal electors!