Mission and more on their minds

(This article was updated July 23, 2020, to reflect correct identifications in photo captions.)

Twenty-six teens from the youth group at St. Jude Parish in Fort Wayne undertook an overnight, weeklong retreat this July, dedicating themselves to hard labor and spiritual growth. St. Joan of Arc served as the spiritual model of the retreat, according to Vickie Lortie, youth minister at the parish. A quote from her provided the week’s theme: “Do not be afraid, God is with you, you were born for this time.”

Joan of Arc is an appropriate example of trust in the Lord due to her bravery in battle as well as her steadfast courage in the face of condemnation. Among other causes, she is the patron saint of imprisoned persons and those ridiculed for their piety.

The annual retreat is spiritually based, with dedicated Mass and prayer times and daily mini-themes focusing on saints such as Joan of Arc and Kateri Tekawitha. Participants also receive gifts of sacramentals, particularly the brown scapular invested by Bishop Kevin C. Rhoades on the feast of Our Lady of Mount Carmel. 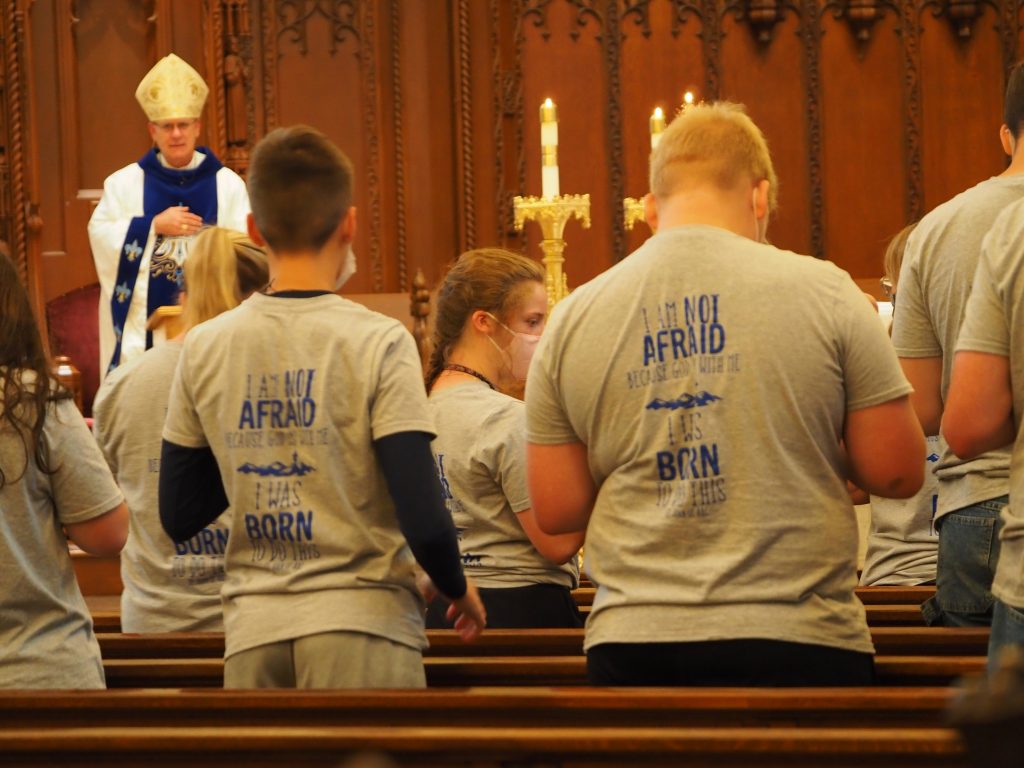 Jennifer Barton
On the feast of Our Lady of Mount Carmel, Bishop Kevin C. Rhoades gave a blessing and investiture of the brown scapular to teens who took part in a St. Jude Parish mission trip after Mass at the Cathedral of the Immaculate Conception, Fort Wayne, July 16.

The broader scope of the retreat is living the Catholic faith through works of service that the teens performed during the day. This year’s group assisted at various places such as St. Vincent de Paul Thrift Store, St. Henry Parish and Thrift Shoppe and by completing projects for Neighborlink at locations around the city, all arranged by Lortie.

Ericka Lopez, a high school senior and four-time participant in the retreat, said that what brings her back year after year is “seeing the reactions from people. Even the smallest tasks we do, they are so grateful for. I feel like you gain a greater gratitude for what you have when you speak to people at homeless shelters and see their love for God.”

Since the retreat is open to students ranging from incoming freshmen to outgoing seniors, Lopez has another year to participate. She is “definitely” coming back one last time, she said. Her favorite part of all her mission trips was helping at La Casa Amistad in South Bend and speaking with native Spanish-speakers.

Helping others is at the hearts of other retreat-goers as well. A group of female students worked at St. Henry Thrift Shoppe, painting murals to beautify the grounds and sorting clothing items. The group was a mix of first-timers and returning participants, but not one of the young ladies had ever been to the store; most didn’t even know it existed. When asked what they felt was the greatest benefit of the retreat, they resoundingly answered, “Seeing the joy on people’s faces.” Though only a couple of them had known each other prior to the retreat, working together brought them closer as the week went on, they said — to the point they began to feel like a family.

Karly Ewing stated that such acts of service bring “hope for renewal. We’re here to bring in hope.”

The organizations that benefit from their service are grateful for the students’ enthusiastic, positive attitude and unflagging hard work as well. Many of the projects that would take all day for one or two clients can be completed in significantly less time with the teens’ assistance.

Deacon Daniel Koehl, who is on pastoral assignment at St. Jude, believes the seeds planted on retreats like this are vital to the future faith life of young people.

“It’s not just about doing work; more importantly, it’s about the Lord and His saving mission,” he said. Looking back at his own life, he stated that retreats help build the foundations of one’s vocation, whatever that might be. “It’s an introduction into the life of faith.”

Mission retreats are not all hard work. Lortie ensures that the students have time in the evening for team-building exercises. Games and activities help release tension and encourage students to open themselves to deeper conversations with others. 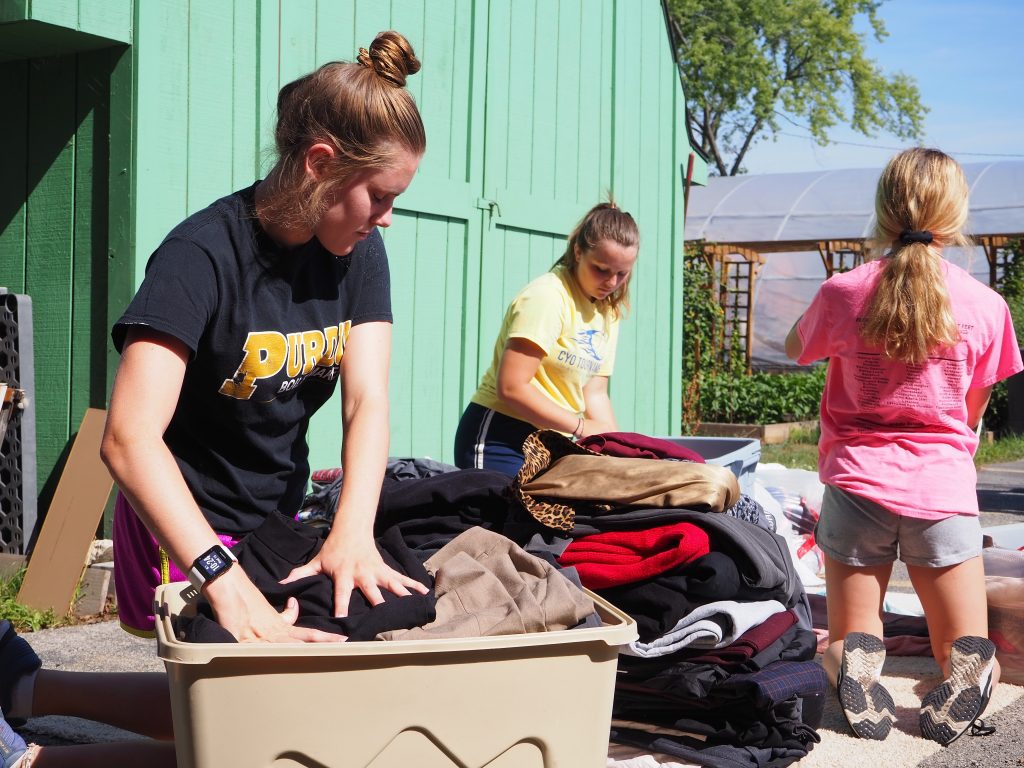 The summer mission trip was already in place when Lortie took over as youth minister at St. Jude six years ago. It has seen changes under her leadership, however, particularly in the trip’s location. Rather than taking a long and expensive trip out of state, Lortie decided to contact former St. Jude pastor Father Thomas Shoemaker, who was at St. Therese, Little Flower Parish in South Bend at the time, to see if they could use his church’s facilities and work closer to home, saving travel time and money. This also allowed for the two parishes to plan a joint mission trip. Lortie saw it as a way to “bridge Fort Wayne and South Bend; to bring our youth groups together.”

That collaboration continues, with the two groups alternating between staying in the Fort Wayne area one year and the South Bend side the next.

Because of the COVID-19 pandemic, however, it was agreed that the two groups should remain in their respective counties this year, though Lortie hopes that next year they will be able to merge again.

This year, the Fort Wayne group stayed overnight at St. Louis, Besancon; a small country parish situated amid the cornfields east of New Haven. The country setting gave the teens a different perspective on life and allowed for various activities that would be impossible within city limits.

On Wednesday evening, a “spiritual bonfire” took place, where unusable liturgical garments were properly disposed of. Deacon Koehl found a blessing of fire to pray over it. 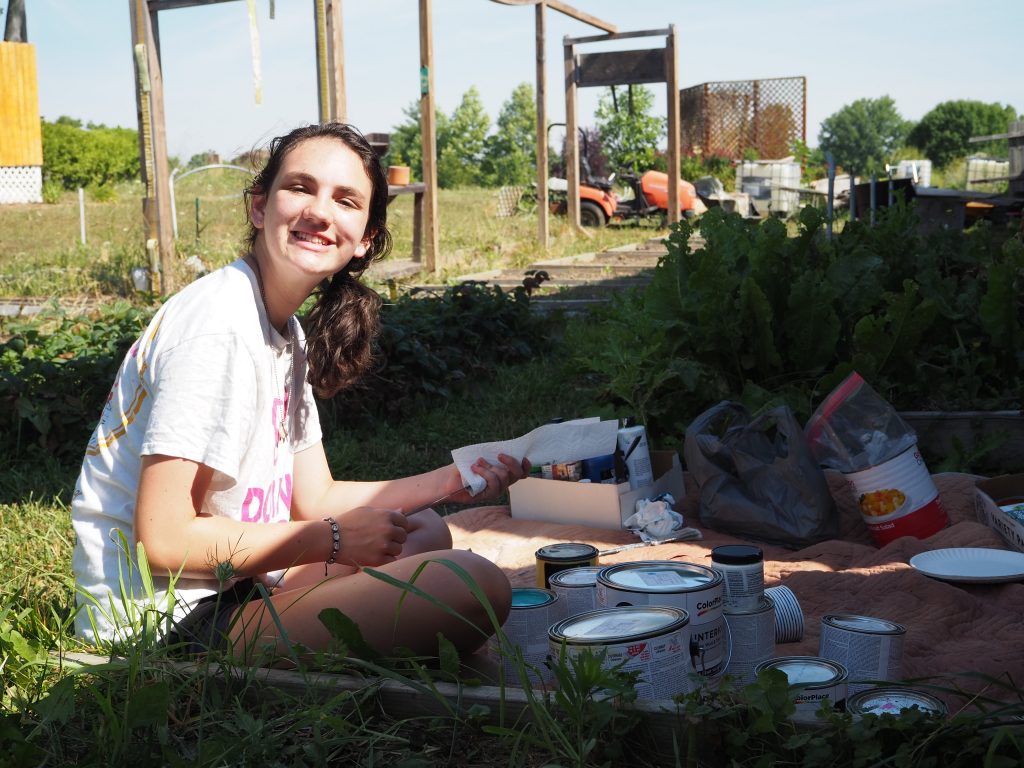 Lauren Krebs prepares paint that the team found among the St. Henry’s donations to paint the donation box and mural at the Thrift Shoppe.

The theme of “Be not afraid” evolved during the months of quarantine and uncertainty, inspired by podcasts of Father John Riccardo, whose theme was “You Were Born for This.” The adult team, comprised of many previous retreat attendees, immediately embraced it while planning for this year’s retreat.

“I want the kids to leave this week not fearing. Not fearing COVID-19, not fearing what school is going to be like next year,” and perhaps most importantly, not fearing parts of town that may be unfamiliar to them. “Maybe this is a neighborhood you’ve never been in, but you’re judging the neighborhood by the houses, the streets, the part of town. Don’t fear it … This is part of God’s design for you. Something is going to happen this week that is going to manifest itself in a greater way in the rest of your life. Go forth — go do it.”

Even when remaining local, the Fort Wayne group often stays at parishes with which the students are unfamiliar, such as Most Precious Blood, giving them an opportunity to experience a completely different neighborhood environment. Precautions were taken to safeguard the all the youths from the novel coronavirus, including wearing masks, taking temperatures and practicing healthy habits.

Participants said they were grateful for the time to serve their community, share fellowship with others and most importantly, grow closer to God.