Catholic high school students from Fort Wayne traveled to Franciscan University of Steubenville, Ohio, to participate in a youth conference hosted by the university during the weekend of July 19. The conference derived its theme, “Belong,” from 1 John 3:1: “See what love the Father has bestowed on us that we may be called the children of God. Yet so we are. The reason the world does not know us is that it did not know him.”

Upon their arrival, the teens gathered for Mass celebrated in the university field house. Following the opening Mass, the young adults, accompanied by more than 2,500 of their peers from as far away as Canada, participated in songs of intense praise and worship performed by the conference band, Sonar. 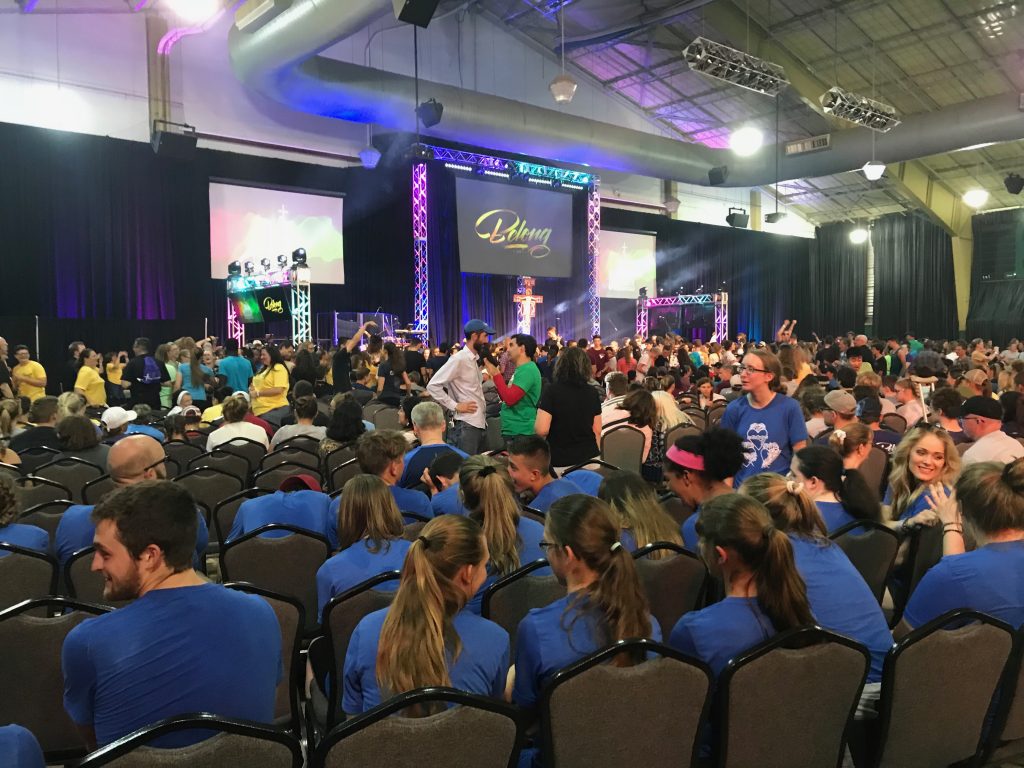 The theme of the conference, “Belong,” drew participants from the U.S. and Canada. — Joshua Schipper

Presenter Matt Regitz began his witness by talking about his daughter, Anna Tess. He described, though several anecdotes, his loving relationship with her. Then Regitz shared a striking realization. “I can’t even fathom how much God must love her. If I love her this much, how much more must God love her?”

He related this to the theme of the conference, continuing: “I think we believe the lie that somehow we were all created either accidentally — or in some sort of mass human production line — without any uniqueness. But God intended every single one of us; He planned every single one of us. See, here’s the good news about God’s plan. You don’t have to ‘fit in’ to be part of God’s plan. God’s plan is to fit you into His plan.”

After the conclusion of the evening’s activities, the teens met in several small groups to discuss their expectations for the weekend, as well as engage in discussion about the day’s speakers. They also had opportunities for the sacrament of reconciliation and adoration of the Blessed Sacrament. 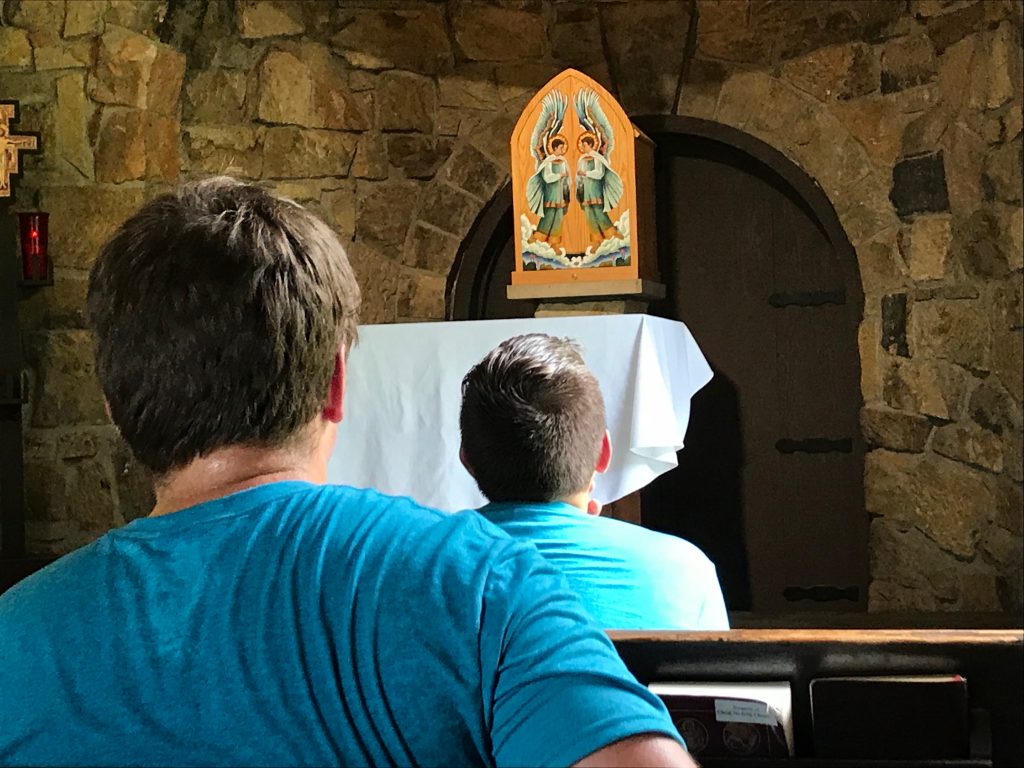 Nicholas Meyer and Reid Eagan pray before the tabernacle at the Franciscan University of Steubenville’s outdoor chapel. — Joshua Schipper

Following the celebration of Mass on Saturday morning, the participants separated by gender. While one group listened to talks oriented to their gender, the other had leisure time to explore the campus. Young men from the Diocese of Fort Wayne-South Bend, during their leisure time, walked reverently to the university’s outdoor stations of the cross before gathering to worship the Blessed Sacrament at an outdoor chapel. The teens also stood in remembrance at the grave of several unborn children.

The young men then heard a witness from FUS alumnus Jonathan Alexander. “Your goal in life is to allow God to make you holy, in a very particular way as men, following Jesus Christ. That we would become holy; that we would allow ourselves to be transformed,” Alexander said. “That’s a really difficult thing to figure out in today’s world: becoming a man after God’s own heart.”

After the groups reunited for a Steubenville-style game of NBC’s “Family Feud,” they had the opportunity to go to one of two breakout sessions, either “Dating 101” or “Heaven, Hell, and Purgatory.” At the latter, Father Leo Patalinghug discussed common misconceptions about the soul’s three possible states after death. To simplify the concepts, Father Patalinghug used a chart with the word “Life,” where each letter stands for a description of that state. For example, using the letter “L,” heaven corresponds to “love,” purgatory to “listening” and hell to “loss.” In addition, the priest fielded questions regarding these afterlife states.

At the beginning of the weekend’s high point, all 2,500 teens gathered in the fieldhouse for eucharistic adoration. Father Patalinghug processed with the monstrance into the fieldhouse, led by several altar servers. At this, adorers fell to their knees in worship. Praise and worship music rang through the gymnasium.

The procession walked for several minutes through the massive crowd. Tears rolled down the cheeks of some of the teens, who stretched their arms for the monstrance as it passed. Sounds of praise emanated from the crowd, and whispers of prayer and thanksgiving echoed throughout. Finally, after Father Patalinghug led adorers in the Divine Praises, the monstrance processed from the fieldhouse.

At the end of the conference, the teens celebrated Mass with Bishop Jeffrey M. Monforton of the Diocese of Steubenville, before returning home to Fort Wayne. 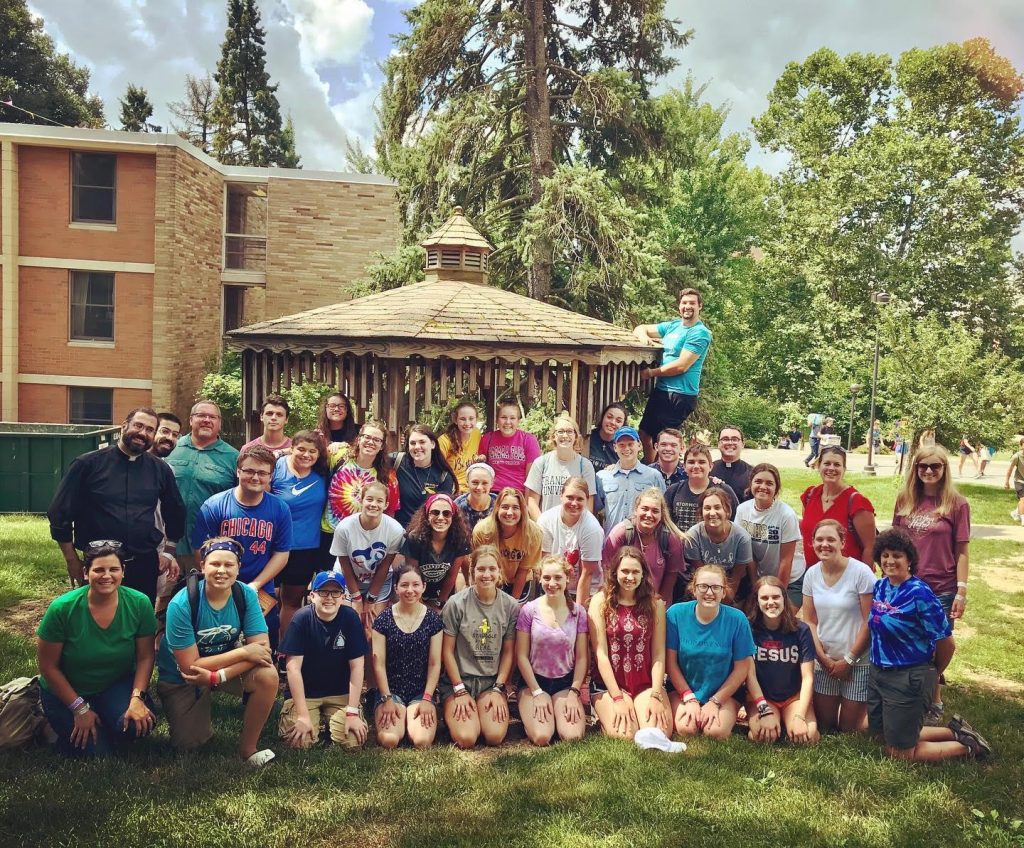 Teens from Fort Wayne traveled to Ohio July 19-21 for a Steubenville Youth Conference at Franciscan University. At the conference, they were reminded of God’s love for them and their place in His kingdom. — Provided by JP Soulliere