History is messy. It is filled with imperfect people motivated by morals and values that sometimes differ from those of modern society. Yet these historical figures and institutions, some of which were Catholic, often shaped the world for the better, which is why Catholic schools in the Diocese of Fort Wayne-South Bend are choosing to incorporate a curriculum that teaches history through the lens of Catholicism.

St. Mary of the Assumption in Avilla is one such school. The principal, Andy Adams, spoke to Today’s Catholic about the importance of educating children in the role the Church has played in forming modern civilization, particularly Western civilization. The school needed new history textbooks, and Adams recalled an email from the Catholic Schools Office that endorsed the Catholic Textbook Project.

“We wanted to update our textbooks and thought, ‘what better way to do it than to find a textbook that is imbued by the faith; that helps students understand the world around them?’” he stated 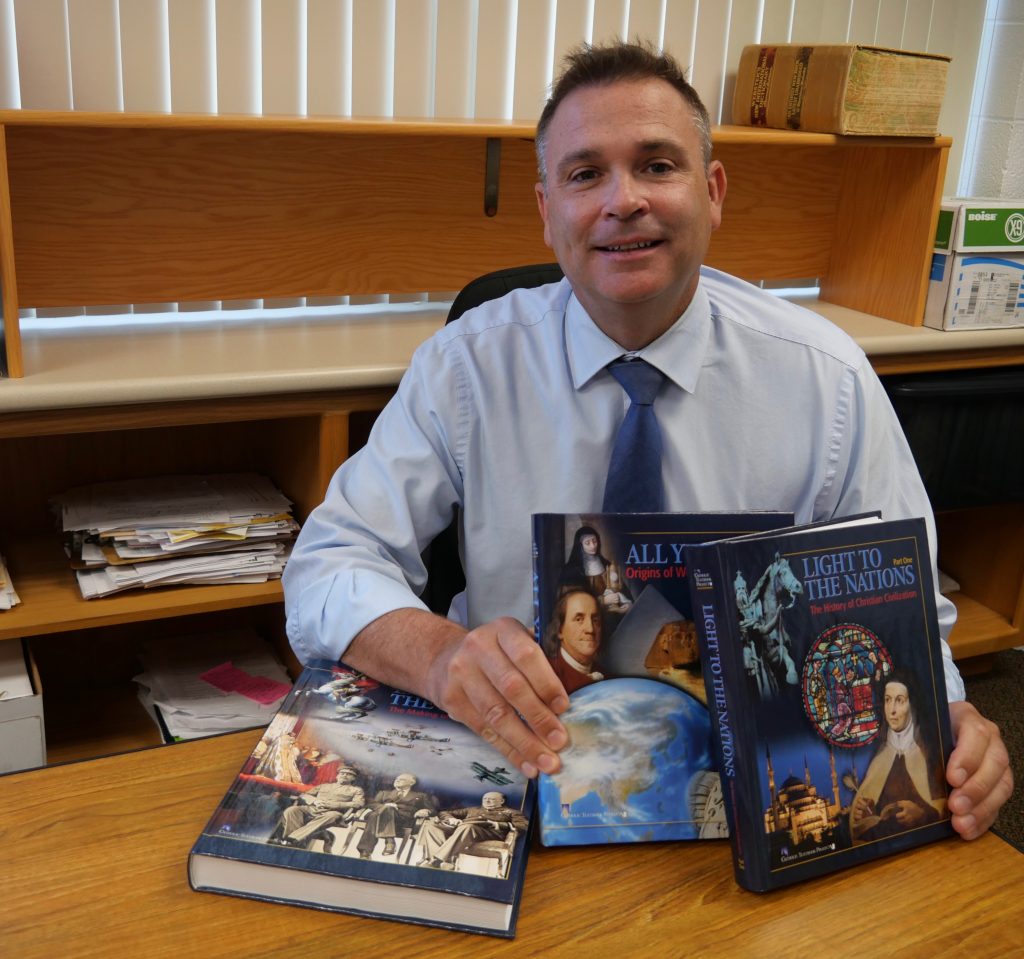 Photos by Jennifer Barton
St. Mary School principal Andy Adams displays history textbooks from The Catholic Textbook Project that show how influential the Catholic Church has been throughout history. Finding textbooks that share the Catholic perspective as it pertains to academic subject areas is a gift to the Avilla school’s students, he believes.

Adams asked Mary Yoder, who serves a dual role at St. Mary as kindergarten teacher and member of the diocesan school board, to examine the Catholic Textbook Project history books and see if they would fit the school’s needs. Yoder was pleased to find that the textbooks bridged the gap between faith and history.

“History is salvation history, and these books take the students through it so that they know their faith as it works with history,” she said. “It will show how influential the Catholic Church has been throughout history, and I think that’s a real gift to give our students.”

Adams agreed and pointed toward the texts’ “rigor” and how they will challenge students to grow in their views of history, language arts and reading comprehension. “It’s thick reading and I like that for our students. … We’re a 4-Star building, and we want to keep it that way.”

He continued, explaining the mission of St. Mary’s school as it pertains to incorporating the Catholic faith in all aspects of the classroom: “We’re remodeling religion, social studies and science to better reflect the truth, beauty and goodness of the Catholic faith.”

Yoder added, “And if you show truth, beauty and goodness, (the students) will be attracted. We do have to work really hard because we’re losing the kids; we’ve seen the Pew research, we’ve seen the numbers, and I think this is one way to address that.” 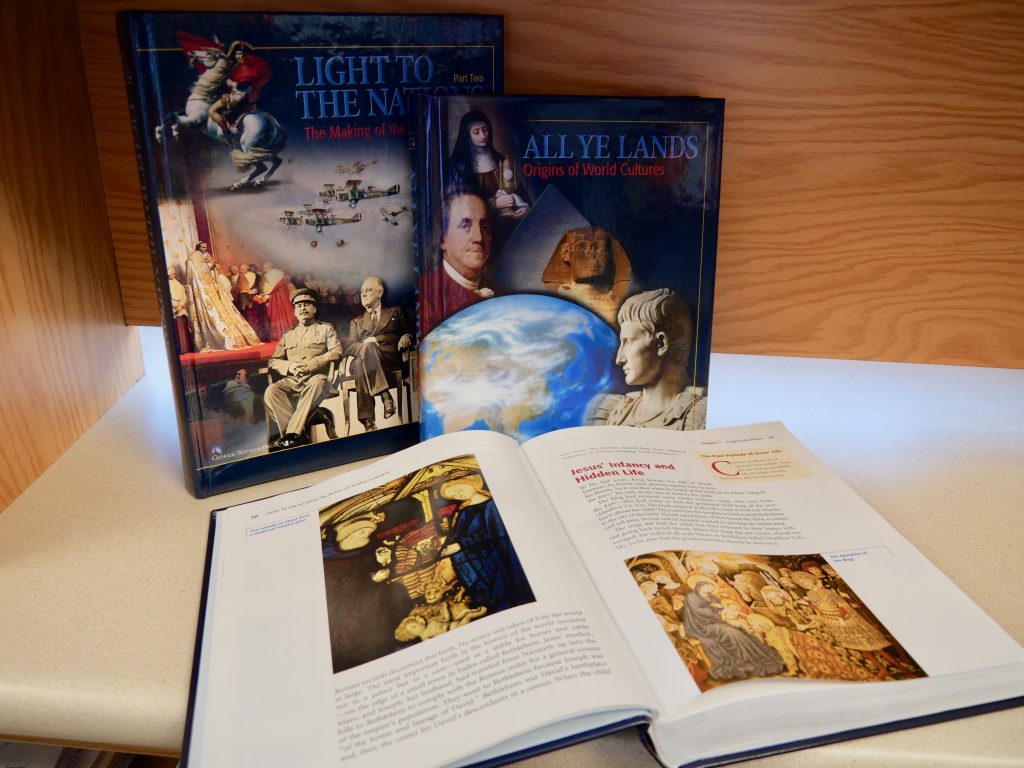 Sixth-grade teacher Brittany Ort has already found ways to bring the Catholic faith into her science and social studies classes. A graduate of Franciscan University of Steubenville, Ort’s classroom this year was decorated with posters featuring prominent Catholic scientists such as the father of modern genetics, Father Gregor Mendel. She began using the new textbooks in her classroom lessons once they arrived.

Huntington Catholic School will also introduce the textbooks in fifth- through eighth-grade classrooms for the upcoming year. Principal Derek Boone stated they will be added as supplemental materials.

The Catholic Textbook Project provides an opportunity to “infuse our Catholic identity in all subjects,” Boone said. He appreciates the books because of their “robust, good Catholic material” and has already received positive feedback from some of his teachers, whom he quoted as saying that the books provide “’a better knowledge of the history of the Church. They reinforce what we’re already teaching, but with a Catholic standpoint.’”

Currently, Huntington Catholic plans to use the texts in grades five through eight as teaching tools in small reading groups and other educational areas. Boone expects that the books will help challenge students of higher reading levels to better prepare them for high school. More than that, however, he believes it is “very important” for a Catholic school to find opportunities to build its students’ foundation of faith in every subject.

Standards for history curricula vary from state to state, and there are distinct gaps between what the Catholic Textbook Project materials cover and the Indiana state guidelines for history, mostly in regard to Indiana history. To close this gap, Adams purchased other teachers’ manuals and some student texts to be used as supplemental classroom materials. The Catholic Textbook Project is looking to address these shortfalls by tweaking the books in the future.

For now, it is of great importance for diocesan Catholic schools to look at history from a Catholic standpoint and the undeniable, monumental impact the Church has had on it. Many people are unaware that even the modern university and hospital systems began with the Catholic Church, Yoder pointed out.

Forming and informing students in the greatness of their faith is the mission of a Catholic school, and St. Mary is striving to greater heights in that area.

“In a Catholic school, too, most important is formation, and so it just makes sense that we would want to do that as much as possible within the traditional four-core subject areas: social studies, science, math and language arts,” Adams explained. “We see religion – our faith – as the first subject, with the other four secondarily. So, we see that we really have five strong areas, and that first area — faith — runs through all of them.”