There was no specific incident that sparked Luz Hernandez’s desire to become a teacher. It was simply something she had always known she wanted to do.

Being a teacher is her calling in life, she said. Her vocation. And on the road to fulfilling that vocation, the Holy Spirit was guiding her before she realized it.

A video retelling of Hernandez’s journey to become a Catholic school teacher was featured at You Can Lend a Hand luncheons that took place at both ends of the Diocese of Fort Wayne-South Bend in January. The annual luncheons, sponsored by Quality Dining, honor the dedicated staff of all the Diocese of Fort Wayne-South Bend Catholic schools. Following the video, Christ the Teacher Award (formerly Light of Learning) honorees from those schools received their awards.

Click here to watch the video about her story.

Hernandez was born and raised in Chicago. Her mother, Maria, was very loving and caring and she stayed at home to raise Luz and her sister, Magdalena. Miguel, their father, was hard-working but always found time for her and her sister.

At age 5, the girls’ aunt, a preschool teacher, began taking Luz to work with her, which the youngster greatly enjoyed.

“Going to school was fun. I always felt comfortable in a school setting; felt safe,” Luz said. She felt that she could “be (in school) for the rest of my life and be happy.” During her elementary years she often would stay late to help teachers grade papers or arrange bulletin boards, then walk home or have her mother pick her up. “I just felt happier at school. I could be myself, especially around my teachers.”

The Catholic baby steps toward faith

Their Catholic faith was something the Hernandez family rarely practiced. Luz recalled a large picture of Our Lady of Guadalupe hanging in the bedroom she shared with her sister, between their beds, and her grandmother prayed the rosary with the children when she would come to visit. “I was intrigued that she would do this every day,” Luz said.

It was there, sitting together in the bedroom with their grandmother, that Luz was introduced to the faith. In her grandmother’s native Spanish, she learned basic prayers such as the Our Father, Hail Mary and Sign of the Cross.

Since the family was not particularly religious, it came as a bit of a surprise to the 11-year-old when Maria signed her daughters up for first Communion preparation at St. Clare of Montefalco Church in Chicago. The year was 2008. Around the same time, her mother was diagnosed with stage 3 breast cancer. 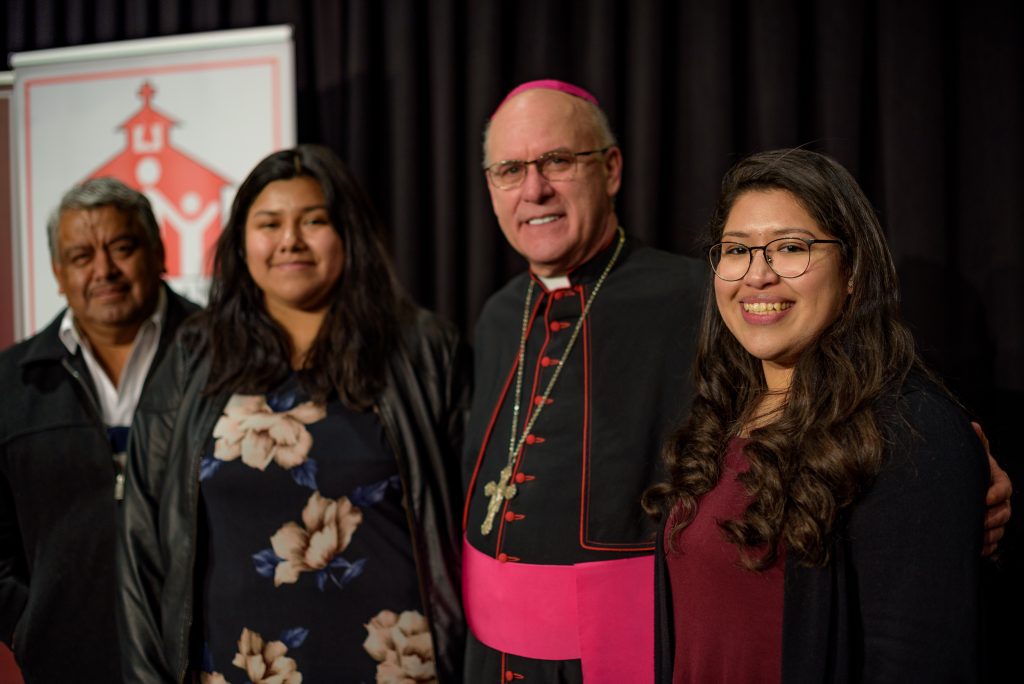 Photos by Nate Proulx
Luz Hernandes attends the You Can Lend a Hand luncheon with her family.

The Hernandez family began attending Mass together every Sunday as required for the girls to receive the sacrament. Maria battled with her cancer, although the sisters were young and oblivious to the struggle.

Her time in catechesis was enjoyable for Luz, even though she was unable to make the transition to what she longed for — enrollment in a Catholic school. After several years, she received a catechist certification at St. Clare. Gradually, Sunday Mass became their family time, which helped the whole family cope with Maria’s diagnosis.

When Maria passed away in 2012, the funeral home was packed. Their Catholic community proved a great comfort to Luz, and numerous friends she had not spoken to in years attended, along with teachers from her previous elementary school.

“It’s so happy that it makes me cry. I was so blessed. I am so blessed.”

The family had been planning a move back to South Bend to be near family when Maria passed away in February. Miguel moved the family to South Bend the same year, in July. Luz was about to enter her junior year of high school, and Magdalena would be a freshman. This was the opportunity Luz had yearned for — a chance to enroll in a Catholic school.

A friend knew Carl Loesch, then-principal of Marian High School in Mishawaka. Her father contacted him, and even though it was summer Loesch said he was more than happy to meet and show them around.

Hernandez fell in love with the small school, picturing herself walking the halls, praying before classes and in the school’s chapel. “I was always good at getting people excited about things, and now I had my sister excited, too [about Marian].”

The cost, however, was more than she had expected. When Loesch showed the girls and their father the tuition total for two students, Hernandez didn’t hesitate. “I had received catechist classes, my sister had not. I wanted her to have the same experiences I did about learning the Catholic faith.”

Luz offered to attend public high school so that her sister could attend four years of Catholic school at Marian. Loesch was so affected by her selflessness that it still resonates with him to this day.

“What could I say? What could anyone say?” Loesch said.

He knew the girls would do well at Marian and wanted them to attend. In what they both saw as the hand of God, within the next 24 hours Loesch was told that an anonymous donation had been made in the amount needed to enable both of the Hernandez sisters to enroll.

He knew the money was meant for them. “God had a plan.”

The sisters did attend Marian, and the support of the school community was a balm to their still-grieving souls. “It was beautiful having peers and teachers that share their faith with you. Every person who wants to build that relationship with God should have the ability to do so.”

At Marian, Luz was able to take a class in which she student taught at another Catholic school, St. Matthew Cathedral in South Bend. Magdalena received kind care from counselors at Marian, which influenced her decision to pursue a career in social work later on.

In many ways, Luz has been on a journey of coming home – home to the Catholic faith, home to her mother’s and grandmother’s memories, home to teaching in a Catholic school. Through it all, she feels that God has been present in her life — the Holy Spirit guiding her footsteps on the path.

Luz graduated from Saint Mary’s College with a degree in religious studies and Spanish. She applied for a teaching position at St. Joseph, but Loesch stepped in and recommended her for a teaching position at St. Matthew, where she had done student teaching years before. After a year in language arts, she was able to transfer to teaching Spanish when a position opened. She also was offered the role of director of English language learners and director of religious education at the school.

Loesch is thrilled to see her continue God’s work as a teacher in the Diocese of Fort Wayne-South Bend. “One of my greatest joys is to see someone come in, thrive, and give back to the schools,” said Loesch. “We are so blessed to have teachers like Luz who give of themselves to share the joy of Christ with students every day. What a tremendous inspiration she is.”

In the video, Loesch left Hernandez and all teachers with an emotional reminder that the greatest step in their journey is the final one, when each will come face to face with God.

“The Lord will ask, ‘I sent you so many children; what did you do with them? Did you bring them closer to Me?’ I hope we can all say, ‘Yes, I did my best.’”