WASHINGTON, D.C. (CNS) – In a 5-4 decision on June 24, the U.S. Supreme Court overturned its nearly 50-year-old decision in Roe v. Wade that legalized abortion in this country.

The court’s 213-page ruling in Dobbs v Jackson Women’s Health Organization was not totally unexpected due to the leak of an opinion draft a month earlier. The ruling emphasizes that there is no constitutional right to abortion in the United States.

The Dobbs case focused on Jackson Women’s Health Organization, an abortion clinic in Mississippi that challenged the state’s law banning abortion after 15 weeks of pregnancy. 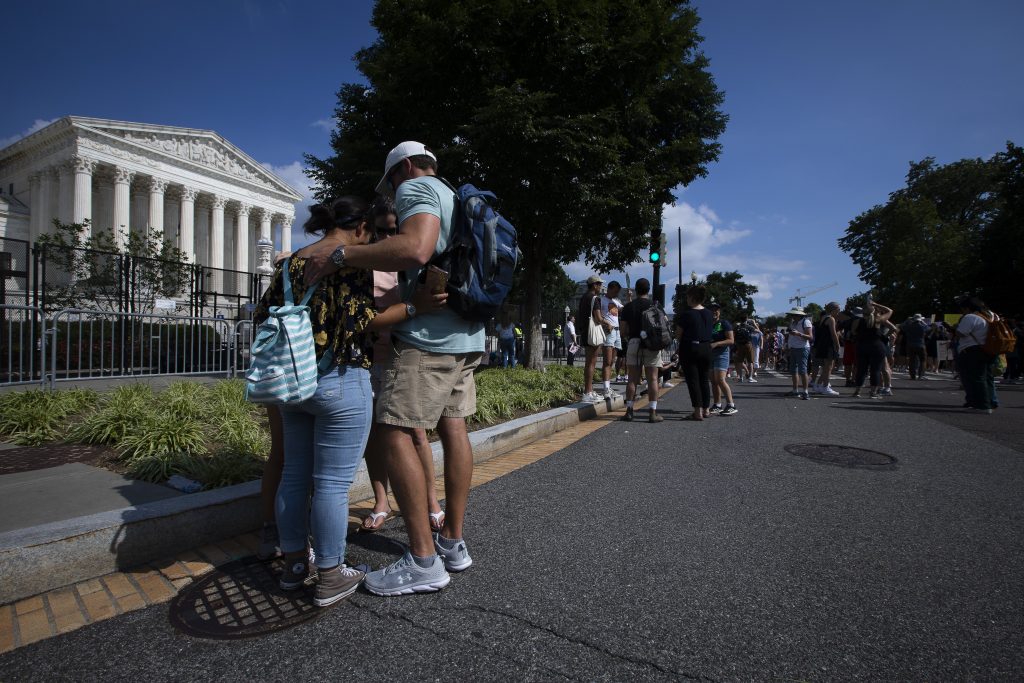 People pray near the Supreme Court in Washington June 24, 2022, as the court overruled the landmark Roe v. Wade abortion decision in its ruling in the Dobbs case, on a Mississippi law banning most abortions after 15 weeks. (CNS photo/Tyler Orsburn)

The court’s reversal of its long-standing abortion ruling brings abortion policy decisions to the state level. At least half of states plan to ban or restrict abortions with this decision in place, and 13 states have trigger laws put in place set to ban abortions right away upon Roe’s reversal.

“We hold that Roe and Casey must be overruled,” Justice Samuel Alito wrote in the court’s majority opinion. Casey v. Planned Parenthood is the 1992 decision that affirmed Roe.

The vote to uphold Mississippi’s abortion restriction was 6-3, with Chief Justice John Roberts voting with the majority. In a separate opinion, he said he would not have overturned the court’s Roe decision. 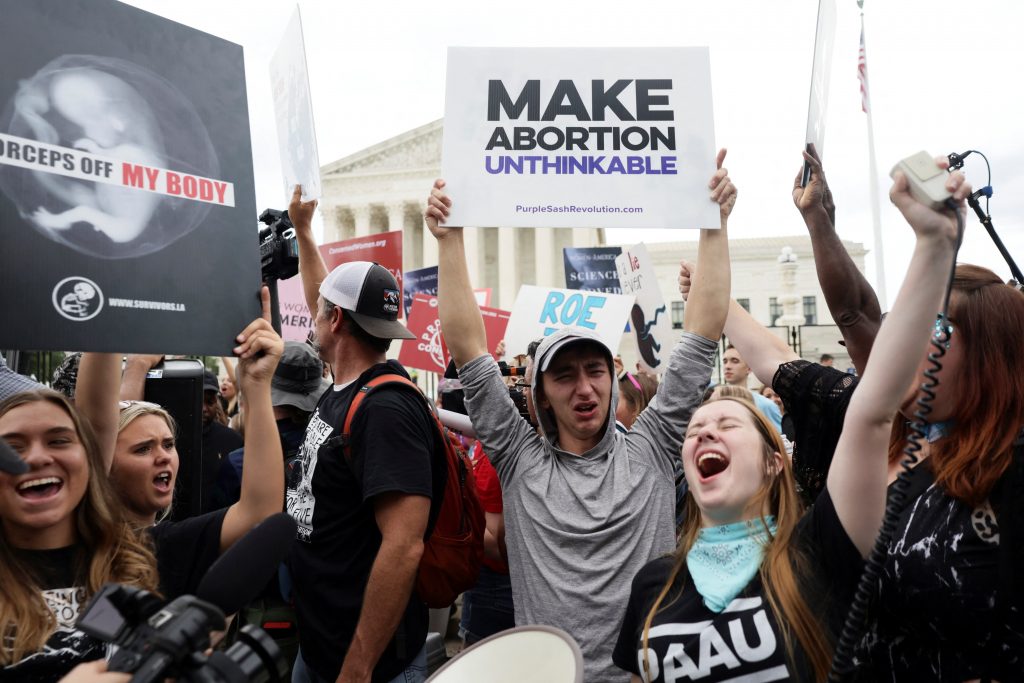 Alito, writing for the majority, said: “The Constitution makes no reference to abortion, and no such right is implicitly protected by any constitutional provision, including the one on which the defenders of Roe and Casey now chiefly rely – the Due Process Clause of the 14th Amendment.”

U.S. Catholic bishops who have supported a reversal of Roe immediately reacted positively to the court’s decision that comes at the end of this year’s term.

The U.S. Conference of Catholic Bishops called the decision a “historic day in the life of our country, one that stirs our thoughts, emotions and prayers.”

“We pray that our elected officials will now enact laws and policies that promote and protect the most vulnerable among us,” said the June 24 statement by Los Angeles Archbishop José H. Gomez, USCCB president, and Baltimore Archbishop William E. Lori, chairman of the USCCB’s Committee on Pro-Life Activities. 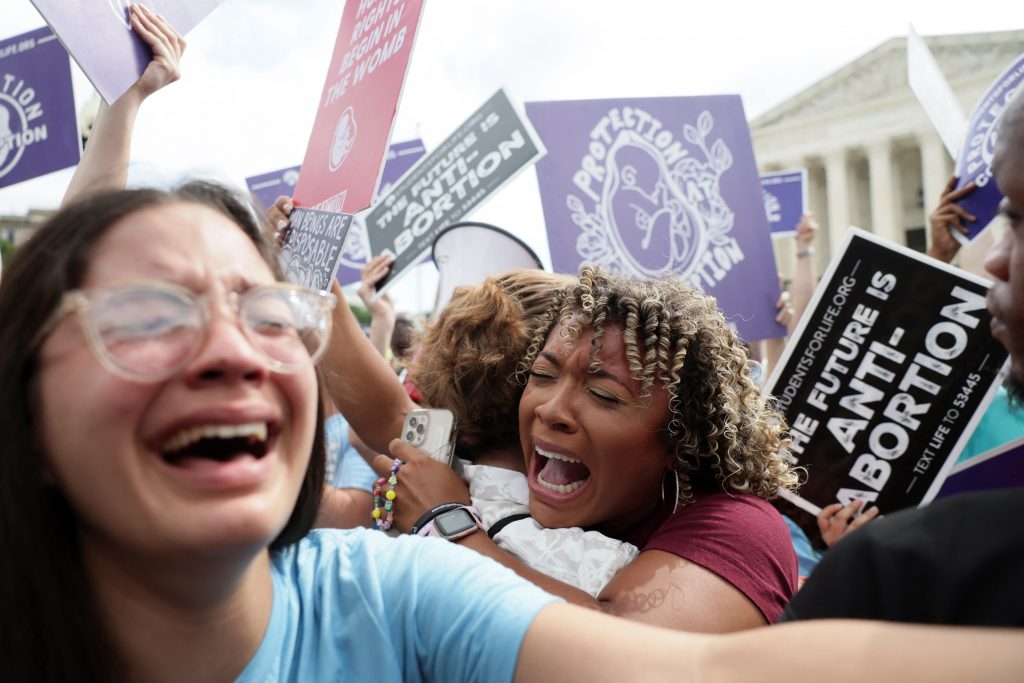 Pro-life demonstrators in Washington celebrate outside the Supreme Court June 24, 2022, as the court overruled the landmark Roe v. Wade abortion decision in its ruling in the Dobbs case on a Mississippi law banning most abortions after 15 weeks. (CNS photo/Evelyn Hockstein, Reuters)

“We give thanks to God for today’s decision … This just decision will save countless innocent children simply waiting to be born,” said the New York Catholic bishops in a statement shortly after the court’s opinion was released.

Those on both sides of the issue were outside the court when the ruling came down and continued to gathered in force throughout the afternoon with posters, bullhorns, hugging and shouting.

Crowds have been outside the court – blocked off now by security fencing – for days, anticipating this decision, just as they were when a draft of the opinion was leaked in early May.

In remarks from the White House June 24, President Joe Biden said the court’s decision was “a sad day for the country in my view, but it doesn’t mean the fight is over,” and he urged Americans to respond with their votes in the upcoming elections.

He also urged demonstrators to “keep all protests peaceful,” adding: “We must stand against violence in any form, regardless of your rationale.”

The Dobbs opinion is very similar to the leaked draft that called Roe “egregiously wrong from the start.”

Justices Stephen Breyer, Sonia Sotomayor and Elena Kagan wrote a joint dissent that emphasized the significance of the court’s previous decisions on this issue.

They added: “Whatever the exact scope of the coming laws, one result of today’s decision is certain: the curtailment of women’s rights, and of their status as free and equal citizens.”

They also noted that their dissent “with sorrow – for this court, but more, for the many millions of American women who have today lost a fundamental constitutional protection.”

When the court announced last year that it would take this case, after considering it more than a dozen times since 2020, the justices said they would only review one of the three questions presented to them: “Whether all pre-viability prohibitions on elective abortions are unconstitutional.”

A friend-of-the-court brief submitted by the USCCB stressed that abortion is not a right created by the Constitution and called it “inherently different from other types of personal decisions to which this court has accorded constitutional protection.”

Referring to the court’s major abortion decisions, the brief also warned that if the Supreme Court “continues to treat abortion as a constitutional issue,” it will face more questions in the future about “what sorts of abortion regulations are permissible.”