LAS VEGAS (CNS) — The University of Notre Dame Sept. 21 released a groundbreaking report that looked at sexual harassment in U.S. Catholic seminaries, revealing that just 6% of seminarians reported experiencing some form of sexual harassment or misconduct, while 90% reported none.

Another 4% said they might have experienced misconduct but were not sure. Of the 10% who reported they had experienced sexual harassment or indicated they might have, 80% percent identified a fellow seminary student or religious in formation as the alleged perpetrator.

Among the respondents overall, 84% percent said they felt the administration and faculty take seriously reports of harassment. Of those who reported an incident, about a third said they were not sure how seriously their report was taken or whether it was acted upon.

The research, from Notre Dame’s McGrath Institute for Church Life, in collaboration with the Washington-based Center for Applied Research in the Apostolate, came from data obtained from 149 seminaries or houses of formations in the United States. The study is titled “Sexual Harassment and Catholic Seminary Culture.” 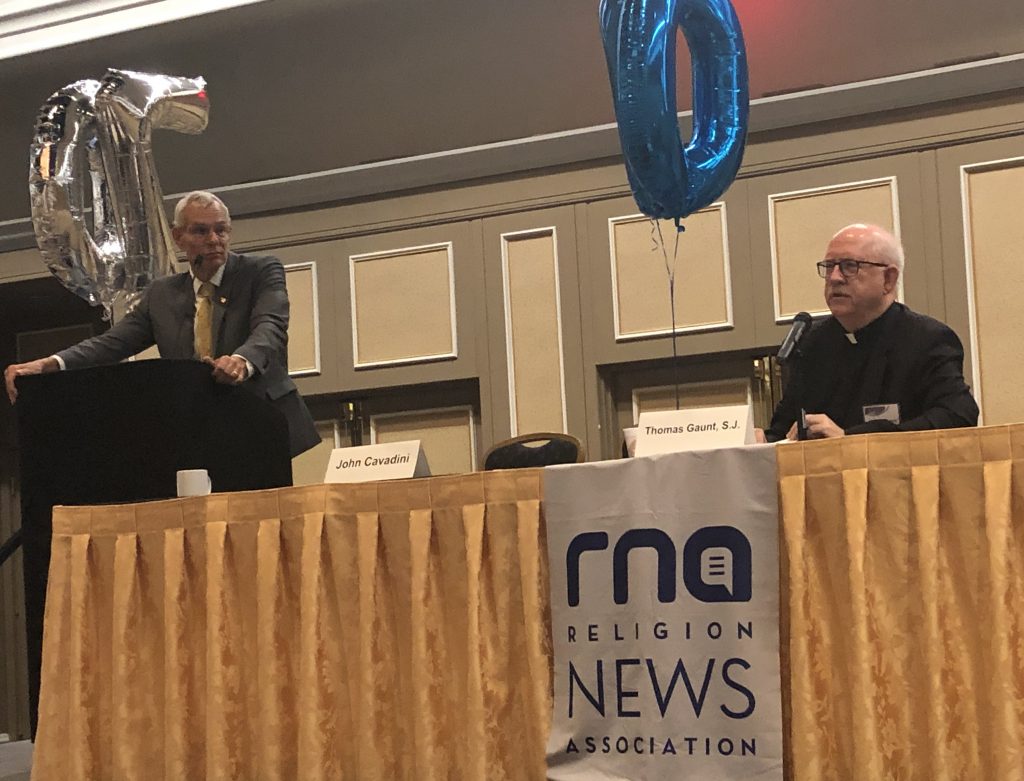 University of Notre Dame professor John Cavadini and Jesuit Father Thomas Gaunt of the Center for Applied Research in the Apostolate take questions from the audience Sept. 21, 2019, during the Religion News Association conference in Las Vegas. They presented findings of their groundbreaking study on sexual harassment in seminaries in the U.S. (CNS photo/Rhina Guidos)

John Cavadini, Notre Dame professor of theology, who presented the results at the Religion News Association conference in Las Vegas, said the survey was a response to rumors about what was happening in seminary culture after allegations surfaced concerning former U.S. Cardinal Theodore E. McCarrick.

“The vision for the survey came in the wake of the clerical sex abuse scandal and abuse allegations against the now-laicized Theodore McCarrick, who was accused of grooming victims during their seminary years,” Cavadini said.

With data, constructive change could take place and affect policies that may be needed to make the country’s Catholic seminaries safer, he said.

Some of the concerns seem to center on the question of whether reports of sexual harassment were taken seriously and acted on by the responsible authorities. Of those who reported an incident, about four in 10 (42%) believe that their reports of sexual harassment, abuse or misconduct “to the responsible authorities” were taken seriously and acted upon “completely” (24%) or “for the most part” (18%).

“We hope to hold people to a higher standard,” Cavadini said.

The number of seminarians invited to participate was 2,375; valid responses came from 1,544. This is a 65 percent response rate.

The Executive Summary of the report on the survey said CARA identified 154 seminaries or houses of formation around the country, but five said they are no longer seminaries or had no candidates at this time. So the number identified for the survey was a total of 149. Forty-eight percent of those, or 72, provided CARA with a list of their seminarians, and CARA emailed 2,215 seminarians invitations to complete the survey. Two seminaries forwarded to their seminarians a generic email from CARA with a link to the survey, bringing the total participation to 2,375.

Jesuit Father Thomas Gaunt, executive director of CARA, who was present for the release of the results, said he believed the research marked the first time such a study has been undertaken. Some of the data can help create or institute policies to ensure that seminarians who report abuse against them will be taken seriously by those in charge, he noted.

“It’s not just our opinion. We have data to show so we’ll be able to say that it is not our imagination,” Cavadini said. “We want to affect the seminary culture. We want to create a culture where that ambiguity goes down.”

In a Sept. 21 statement introducing the research, Cavadini said that in approaching the report, researchers wanted to give seminarians a voice without fearing reprisal.

“As a service to the current and future Church, we wanted to try to get some objective data on how prevalent (or not) sexual abuse and harassment might be at seminaries,” he said.

Editor’s Note: The full report on the “Sexual Harassment and Catholic Seminary Culture” study can be found online at https://bit.ly/2lImRF6.