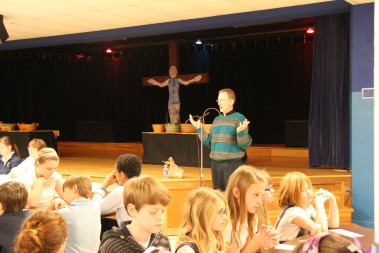 Father Tom Shoemaker, pastor of St. Jude Parish in Fort Wayne, prays with St. Jude students at the school’s Agape Prayer Service on March 29, where donations to the Holy Childhood Association were collected.

FORT WAYNE — Catholic school students from across the diocese have been focused these past six weeks on sacrificial giving, one of the three pillars of Lent, by working to save money to donate to those who are less fortunate.

Many diocesan schools have held programs and events to further the formation of service-driven hearts with the proceeds earmarked for the Holy Childhood Association to benefit children in need around the globe.

The Holy Childhood Association, established in 1843 by Charles de Forbin-Janson, bishop of Nancy, France, is an international organization of students in Catholic elementary schools and religious education programs, dedicated to fostering children’s awareness of the missionary nature of the Church. Through the financial contributions of the children it carries out educational, medical and welfare projects in the poorest areas of the world.

One Fort Wayne school, St. Jude, has been invested in the association for several decades. Each year since the 1970s St. Jude students’ voluntary sacrificial giving has been a part of the school’s Lenten legacy to the Holy Childhood Association, says Principal Sister Kathleen Knueven, a Sister of Notre Dame.

This year the donations were collected from each grade during the St. Jude’s Agape service held March 29 in the school’s lunchroom.

The solemn Agape service was a reenactment of the Last Supper during which there was song, Scripture reading and a homily by St. Jude pastor, Father Tom Shoemaker, who challenged the students gathered to “serve as Jesus served.”

Following the homily the Holy Childhood Association boxes used by the students to retain their coins were gathered in baskets beneath the lunchroom crucifix. The teachers then washed the first- through eighth-grade students’ hands, each partnered with a “spirit pal” from a different grade, to commemorate the washing of the disciples’ feet by Jesus at the Last Supper.

Father Shoemaker blessed and broke the ceremonial bread, which was made for the special event by retired Sister of Notre Dame Sister Damian Meng and area senior citizens, and eaten in silence by the students. The event has been part of the school’s observance of Holy Week for decades, but because spring break coincides with Holy Week this year, the school held the Agape service early.

Fourth-grade teacher Pat Frost, coordinator of the Holy Childhood Association for St. Jude said, “We never stress the amount to be given. It’s whatever the student feels able to donate.”

The students know the association is “under the watchful eye of the pope, who will send the money where it’s needed most,” Frost added. “It’s about saving and sharing. … There’s an awful lot of pennies, nickels and dimes in the collection. That shows it truly is the children’s money.”

Of the importance of the Holy Childhood Association at St. Jude Father Shoemaker said, “It’s a way for our students to recognize that there are children around the world in need of help. And that we need to help in any way we can.”

He added, “It’s a nice time to collect for the association with Holy Thursday, which is a reminder to us to serve others. Sometimes it’s through washing others’ feet, sometimes it’s taking up a collection. It’s about service.”

Several other diocesan schools are active in the association as well. Principal Chad Barwick of St. Anthony de Padua in South Bend reported that the school assembled for a Lenten prayer service that focused on prayer, fasting and almsgiving for the Holy Childhood Association. The students raised $310 through their sacrifice.

Huntington Catholic School students have been saving money throughout Lent in their Holy Childhood boxes that will be collected soon and also promoted a dress down day where $161 was collected for the association’s needs.

St. John the Baptist, New Haven, students have been collecting money for the Holy Childhood Association through their “Coins for Christ” campaign. Principal Janice Comito reported that students also participate annually in the HCA National Week of Prayer, when they pray the HCA prayer at the end of each school day.

Most Precious Blood School, Fort Wayne, Principal Alexandria Bergman said students there participate in the Holy Childhood Association through collections during Advent and Lent as well as their print magazines in junior high religion classes.

St. Therese School, Fort Wayne, students used the coin collecting cards during Lent this year and will donate the proceeds to the Holy Childhood Association.

The students of St. John the Baptist School in Fort Wayne have raised over $400 for the HCA since November. Principal Amanda Robinson reports that in addition to collecting quarters and filling their boxes, students were challenged to earn the money they donate to HCA, as a way of fostering a “renewal of hearts through good deeds.” As student filled their boxes with quarters, they decorated a paper doll outside their door.

St. Aloysius Principal Tina Voors was pleased with her students’ response to the school’s Lenten project focused on HCA. She said, “Our kids did jobs around home and for neighbors to ‘earn’ their money to put into the banks. … They had to give of their abilities and time for the sake of other children.” The children donated several pounds of coins that will be presented to their pastor, Msgr. Galic, on Easter Monday.

St. Thomas the Apostle School in Elkhart began their projects to support the needs of the Holy Childhood Association during Advent this year, which included prayers for the needy children and coin boxes placed at the prayer stations in each classroom and by the snack cart in the lunchroom. Principal Christopher Kolakovich reports that St. Thomas students also began each morning with a special prayer during HCA’s National Week of Prayer.

The dedicated students of the diocese, along with the estimated 7 million other children currently enrolled in the Holy Childhood Association worldwide, are making a difference in the world by showcasing the heart of Jesus in their sacrificial endeavors.