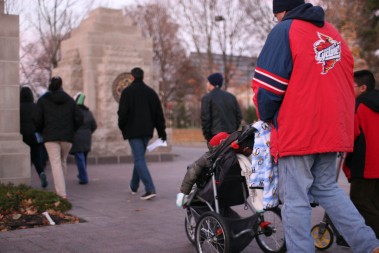 Pilgrims arrive at the campus of the University of Notre Dame.

SOUTH BEND — Pilgrims gathered outside St. Joseph Catholic Church in South Bend, braving the elements as they embarked on a pilgrimage Wednesday evening, Nov. 13, promoting comprehensive immigration reform. The pilgrimage, organized by St. Adalbert parishioner Jesusa Rivera in collaboration with the Notre Dame Institute for Latino Studies, culminated in a reception held at the Hesburgh Center on the University of Notre Dame campus, where students and faculty received the pilgrims with song, prayer and a meal.

Following the reception, the pilgrims attended a lecture in the Arthur Foundation Transformative Latino Leadership Lecture Series given by Carlos Eire, professor of history and religious studies at Yale University, who spoke on his experience as a Cuban immigrant.

The event was timed to coincide with the feast of St. Frances Xavier Cabrini, herself an Italian immigrant to the United States, and patron saint of immigrants.

Evelyn Gonzalez, a Holy Cross student who assisted in the planning of the pilgrimage, commented that while many immigration reform events focus strictly on politics, they specifically wanted to hold a prayerful pilgrimage for reform.

“What better way to celebrate St. Frances Xavier Cabrini than this?” Gonzalez said.

Parishioners from St. Adalbert Catholic Church, including several families with young children, were joined by students from Holy Cross College for the walk from St. Joseph to the campus of Notre Dame. The majority of the event’s participants were among the estimated 11 million undocumented immigrants living in the U.S., for whom the issue of immigration reform is of great personal consequence.

“I wanted to participate in this event because it’s something that affects us directly,” said María Lopez, a mother of three, who also participated in a march held three years ago in Indianapolis.

Several Latino Holy Cross students also attended the pilgrimage, representing the thousands of undocumented youth in the U.S. who are potential beneficiaries of the DREAM Act. Gonzalez herself has recently been approved for DACA (Deferred Action for Childhood Arrivals), a temporary legal status awarded to young people between the ages of 15 and 31 who were brought to the U.S. as children. This is a positive step, she says, “But the rest of my family is still left out in the cold.”

Gonzalez currently works alongside other activists to push for comprehensive immigration reform, and feels that garnering political support for this issue is an urgent matter. “Now is the time,” Gonzalez emphasized.

Jesusa Rivera, who works as an advocate for immigrant rights at both local and national levels, explained that the remaining weeks before mid-December are critical for pushing immigration reform in the House of Representatives. The stakes are high, Rivera said. “If it stalls now, we’ll wait another five, six years, maybe more.”

Rivera chairs the committee for Civil Rights for Immigrants within the Indiana Organizing Project, and has helped to promote awareness and activism for immigration reform at her home parish of St. Adalbert. She has spearheaded efforts through the parish to capture the attention of Rep. Jackie Walorski (R-Ind.-2), in hopes that the Congresswoman will take up the cause of immigration reform for her constituency.

Rivera was inspired to organize the pilgrimage for reform on Frances Cabrini’s feast day because she wanted an opportunity for local Latino Catholics to experience the support of the larger Catholic community, particularly at Notre Dame. “For this group to be welcomed here at Notre Dame — this is what it’s all about. We just need our legislators to pay attention and push for the same kind of solidarity.”

Dr. Timothy Matovina, executive director of Institute for Latino Studies at Notre Dame, was the first to welcome the pilgrims who arrived at the Hesburgh Center. The evening was an occasion, Matovina remarked, “for asking the saints to accompany our struggle for a more just society.”

In keeping with the spirit of the evening, Dr. Carlos Eire spoke in his lecture about the challenges he encountered as an immigrant to the U.S. Eire was one of the 14,000 children airlifted out of Cuba during Operation Peter Pan in the early 1960s. While the difficulties Eire faced as a child refugee certainly differ from those of many Hispanic immigrants today, his stories of the discrimination he experienced still ring true.

“It has to do with how we see one another,” asserted Rivera. “If we are all made in the image of God, then where is the justice? It doesn’t make sense for some of us to be treated as less than human. I, for one, can’t sit by and let it happen.”

St. Adalbert parishioner Verónica Martinez was encouraged by the pilgrimage and the warm reception from the Notre Dame community. “It’s really motivating,” she said. “It reminds us that nobody can take us off the path toward our goal. We’re getting there, little by little.”