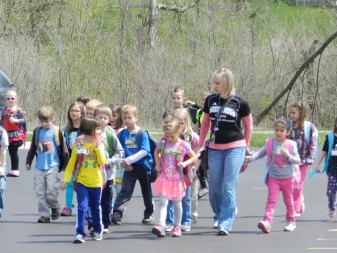 FORT WAYNE — The number of laps didn’t matter, but the cause for this year’s major service project certainly did. On Friday, April 26, 750 students from St. Vincent de Paul School in Fort Wayne participated in a walk-a-thon to raise money for young boys in a distant land on a gloriously sunny, last day of the school week.

Excused from their normal uniforms, nearly everyone in grades K-8 paid a dollar to “dress down” and a penny to walk laps for a half hour in the school parking lot.

Even more impressive, the student body held contests all week long and competed to earn a free homework pass and root beer floats.

In the end, the sixth graders edged out the second graders collecting over $1,600 alone. In all, the Panthers raised $8,500.

One of the sixth-grade homeroom teachers, Becky Blevins, loved how her students took the project to heart, “We had students walking their neighborhoods collecting for the boys in the pouring rain. After tallying the results each day, the students did the ‘happy dance’ and I really saw spiritual growth throughout the week. ”

Assistant Principal Beth Kleber echoed her sentiments, “We never imagined the project making such an impact on the students. I had hoped we could raise $2,000 and can only explain the outpouring as the work of the Holy Spirit.” 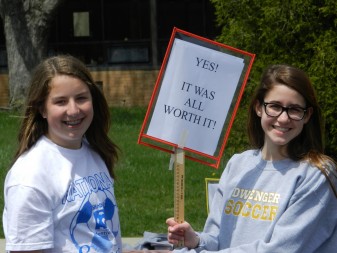 The funds will be sent via Sister M. Germaine of the Poor Handmaids of Jesus Christ to the St. Joseph Home, “Caring Place” in Kenya in East Africa.

The adopted facility houses over 75 homeless boys who would otherwise be on the streets suffering from tragedies caused by violence, death of loved ones, illness and poverty. Seeking the basic necessities of food, clothing, shelter and education, the mission was a perfect focus for St. Vincent this school year.

“Each year, we elect our student council in May. Over the summer months, they research and discern different charities then decide as a group during the fall ‘Care Week’ — a week which raises awareness for those in need,” explained Linda McCarthy, development director.

“We try to pick a group which matches our Catholic identity and one that may not always have another steady income stream,” Kleber added.

Cecelia Manning, mother of student council president Michael Manning, and grandmother Mary Cuney had heard Sister M. Germaine speak and were moved by her cause. They encouraged Michael to bring her before the student assembly.

At 83 years young, the spunky sister captivated her audience and easily swayed them to see the critical needs of the St. Joseph Home and partner with them. “She is great with young people,” vice-president Lizzy Roy detailed when she told how the contact attended the school carnival and played every game.

Aware that a mere $100 can cover the fees, food and clothing for one boy for one semester (three months), the Panthers sent the sisters $5,000 at Christmas time from their early efforts and now, thanks to the great success of the walk-a-thon, they plan to invite Sister M. Germaine to their year-end awards ceremony and present her with at least another $10,000 for the village home.