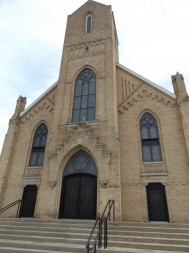 ELKHART — St. Vincent de Paul Parish has been reaching out to others beyond the parish by sending mission teams to establish Christ Renews His Parish programs; by sponsoring a sister city parish in Haiti and Father Matthew Coonan, pastor, wants to find ways to outreach more in the community.

St. Vincent de Paul is the second oldest church in Elkhart County. It was formally organized on March 8, 1868 by Rev. A.B. Oechering of St. Joseph in Mishawaka who came twice a month to celebrate Mass. Twenty Catholic families pledged about $1,000 and chose St. Vincent de Paul as their patron.

St. Vincent’s has always been proud of its diversity and ‘immigrant congregation.’ The majority of its first members were German and Irish and in the early years sermons were given in German and English. Around the year 1900 large numbers of Italian families moved into the area and soon Italian was often heard around the church grounds. Today, the Hispanic community has brought a new language and culture to St. Vincent’s.

The first church was built south of the present day school and the first Mass was celebrated on July 18, 1869. That building was used as a church until 1888 and then as instructional space until 1909. By the mid 1880’s the parish had outgrown its facilities and required a larger worship space. The pastor at the time, Father William Kroeger, contracted a Chicago architect, Adolphus Druiding, to design the new church. He chose the then popular Gothic Revival Style. Fourteen of the original fifteen stained glass windows remain in the building today. 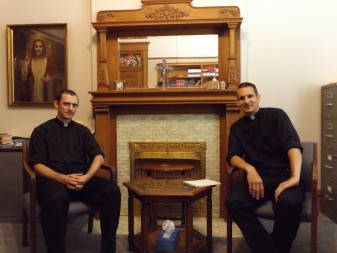 St. Vincent’s currently has numerous small faith groups in both English and Spanish, including a Rekindle the Fire for men in Spanish and a similar program for women, which meets twice a month. There are strong Spanish charismatic groups that meet and hold monthly one-day retreats.

For the English community,  a Daughters of Isabella group has been growing. “Their focus is on social justice and promoting life,” Father Coonan said. The Altar Rosary Society is also strong.

The Knights of Columbus is combined with St. Thomas Parish for one city-wide group but at St. Vincent’s, the members prepare Thanksgiving baskets and hold spaghetti dinners.

Christ Renews His Parish is currently being held only in Spanish but St. Vincent’s is preparing to send another mission team to a church in LaPorte. St. Vincent’s previously sent mission teams to start the program in Goshen, Ligonier and Our Lady of Hungary in South Bend.

Father Coonan said the RCIA program and religious education programs are both “incredibly strong. We have a lot of amazing volunteers. We offer high quality RCIA and faith formation and religious education in English and in addition, in Spanish there is tremendous charismatic growth which is creating lots of conversions, marriages getting blessed and children receiving the sacraments.”

There are 2,400 registered families in the parish. Seventy-five percent of the parish is Hispanic, although many are second and third generation and attend Mass in English. There are a total of seven weekend Masses — one in each language on Saturdays and three English Masses and two Spanish Masses on Sundays.

Per year the priests average 200 Baptisms, 35 weddings and more than 20 Quinceneras —many of which occur in the summer months.  This year 120 members were confirmed and 145 received first Communion. There are over 600 children in religious education.

Despite the large Hispanic population Father Matthew said, “I think it’s a misnomer to say St. Vincent’s is a Spanish parish — what we do is serve whoever comes to us.”

He said at the request of Hispanic family members he adds English into the Homilies at the Spanish Masses.

“You should see all the heads snap to attention,” Father Zach said.

They said both cultures are mutually blessed by the presence of the other and more interaction between the two cultures at events like the parish festival has helped to bring them closer. Father Coonan said sometimes a language barrier can make things uncomfortable but “everybody loves each other.”

St. Vincent’s School was built in 1909 and this year they will be adding an eighth grade. School offices will be moved to the former convent still attached to the school. That space is currently used for religious education space and meetings, but there is more room to be utilized in that building.

“The morale at the school is the highest I’ve ever seen — our Principal Tara Lundy is amazing,” Father Coonan said.

There are currently 150-155 students at the school and all of this year’s seventh graders are planning to stay for eighth grade.

The pastor describes both the parish and school personnel as “phenomenal” and said because they have such an excellent staff it allows him and Parochial Vicar Zachary Barry to concentrate on sacramental preparation, administrating sacraments and assisting with youth group and religious education. 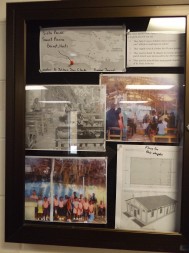 St. Vincent’s is gearing up to celebrate its 150th anniversary in 2018 and plan to beautify the church with input from parishioners. Plans call for  side altars for Mary and Joseph and a glass-walled quiet room in the back of the church. Also planned is a church history.

As part of the 150th anniversary parishioners want to help their sister parish in Bainet, Haiti, rebuild a chapel. Father Barry said they’ve had a relationship with this sister parish of St. Peter’s for well over a decade and their chapels were destroyed in the 2010 earthquakes so as a special part of the anniversary celebration, a new chapel will be rebuilt.

An area of growth that Father Coonan feels the parish is ready for is outreach to the local community. The church is located in an impoverished neighborhood so he said one way to do so would be in a charitable manner through the St. Vincent de Paul Society.

“That would be one way to be a light. Our Holy Father Pope Francis encourages us to foster more of that type of reaching out,” he said.

He also envisions having an event or program where people in the neighborhood would feel comfortable being invited.

“We don’t force conversion but we want to invite,” he said. “That’s my responsibility as a pastor. I’m responsible for those souls and it’s not something I take lightly. I feel it’s something the Lord wants me to do.”