St. Vincent de Paul Parish in Elkhart celebrated its sesquicentennial of serving the faithful in Elkhart on Sunday, Sept. 30, with a special Mass and reception. 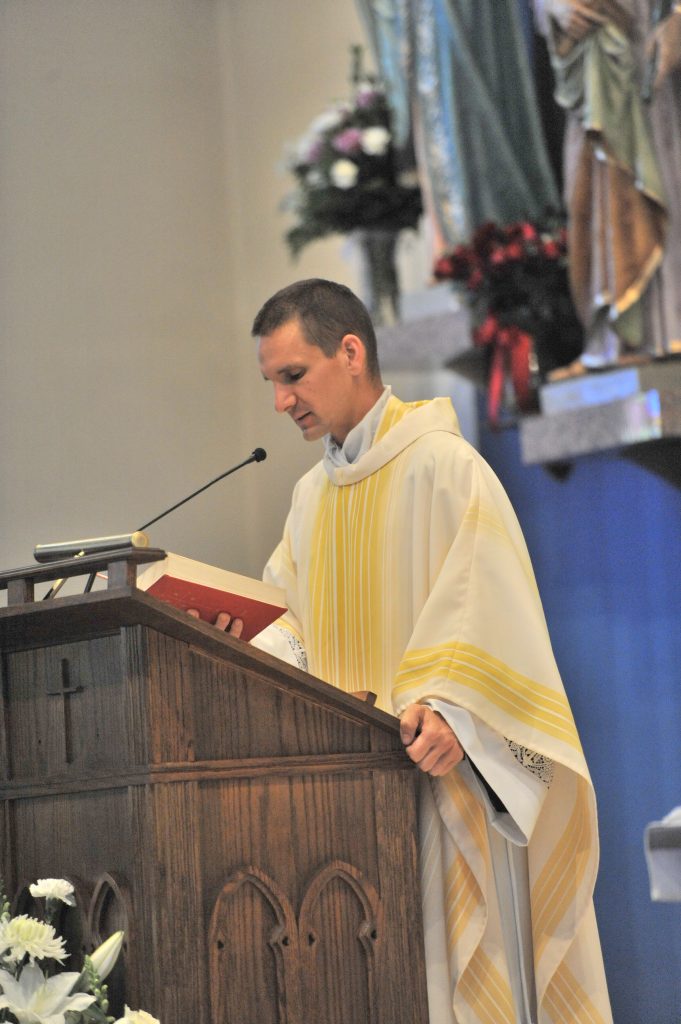 Father Matthew Coonan, pastor, explained that although the actual anniversary date of the parish was in July, the staff and parishioners wanted to celebrate the milestone in conjunction with the feast St. Vincent de Paul, which was Sept. 27. “This year is our 150th year, so we planned our celebration close to our patron’s feast day instead rather than in the middle of Lent,” he said.

In honor of the anniversary, a monthly 40-hour devotion was begun about a year ago for the purpose of fostering a stronger devotion to the Blessed Sacrament “to spiritually prepare to celebrate our patron,” Father Coonan said. It began each month on a Sunday evening at 5 p.m. and continued until Tuesday at 9 a.m., and was so well-received, according to parishioners, that Father Coonan plans to continue it.

A 150th anniversary committee was also formed, and they chose an apostolate — a charitable act — each month to emulate their parish patron.

George and Vicki Kalil were part of that committee, along with Joe Foy, Diane Consentino, Kellie and Bill Swaller, Anne Koch, Theresa Piechowiak and others. Some of those charitable acts included a 5K run for their sister parish, St. Peter in Bainet, Haiti, to help rebuild a chapel destroyed in the 2010 earthquake; a food drive for Knights of Columbus Christmas baskets; and a coat drive for St. Vincent de Paul School, the St. Vincent de Paul Society and a homeless shelter in Goshen. “By doing one thing a month, we got the whole parish involved and kept it in front of them,” George said.

The committee also helped plan the anniversary Mass. They invited back former priests who served the parish, put together historical exhibits and planned a light reception that would take place in the St. Mother Teresa Center. Students from the school lead tours of the school for former students during the weekend, and an anniversary prayer and song were composed for the special occasion.

Father Coonan welcomed everyone to the Mass by saying, “It is with great joy that we come together to celebrate Mass, especially with so many of the priests who’ve served in the past joining us. We’re also grateful for the bishop being here, so with gratitude in our hearts we ask to be strengthened to be faithful witnesses for the future.” 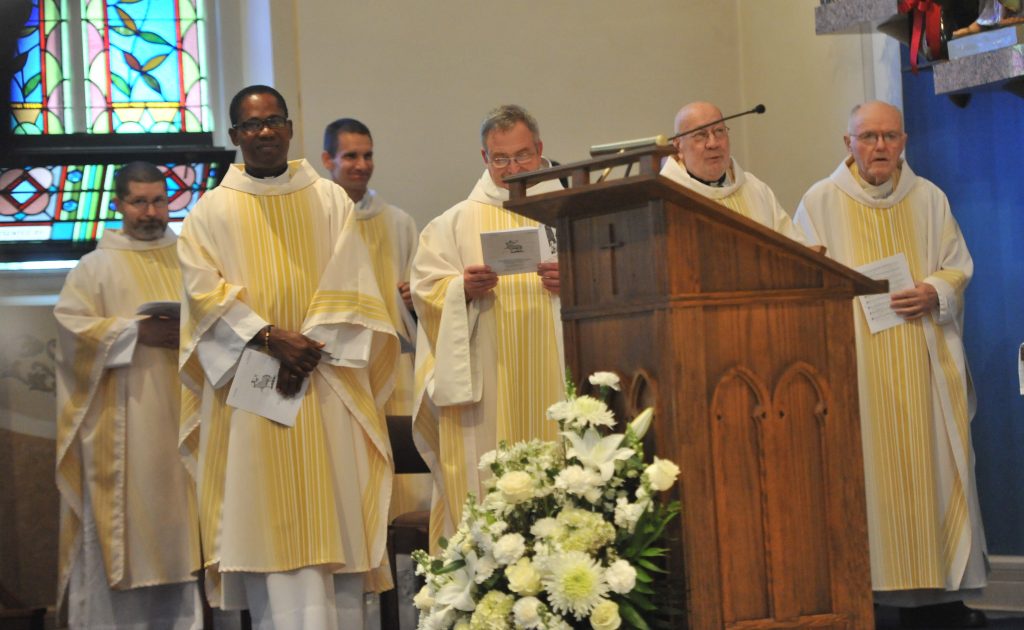 Bishop Kevin C. Rhoades also greeted the parishioners and visitors who filled the church. “Today we celebrate with much joy and thanksgiving your 150th anniversary, and also the feast day of your patron, St. Vincent de Paul,” he began. He then mentioned how wonderful it was to have several of the parish’s former pastors return to concelebrate the anniversary Mass. Returning were Father David Carkenord, Father Jack Overmyer, Father Wilson Corzo, Father Glenn Kohrman, Father Judd Hayes and Father Zachary Barry, as well as Father Jacob Gall, who still serves the parish on occasion.

The Mass was a trilingual celebration, with several parts of the liturgy sung or spoken in Latin.

During the homily, Bishop Rhoades gave a brief introduction to the parish’s history and connected it to the Gospel for the day, which was Matthew 9:35-38.

“A priest from Mishawaka, Father Henry Koenig, would occasionally visit the Catholics of Elkhart and celebrate Masses in their homes. In 1867, a new pastor was named for St. Joseph Parish in Mishawaka, Father August Bernard Oechtering, and he would come here to Elkhart more often and organized a congregation of about 20 Catholic families. He told the first bishop of Fort Wayne, Bishop John Henry Luers, about the little congregation, and Bishop Luers came to Elkhart for a visit.

“Bishop Luers was impressed with the Catholic families and the growth of the town of Elkhart and he tried to acquire property for a church,” Bishop Rhoades continued. “He found property that he wished to buy, but when they found out it was for Catholic purposes, they would not sell the property to him. So, he found other property on the Goshen Road and bought it. It was on March 8, 1868, 150 years ago, that Mass was celebrated in Conley’s Hall, after which Father Oechtering called a meeting and officially organized the congregation and placed it under the patronage of St. Vincent de Paul.”

On July 12, Bishop Luers returned to Elkhart and blessed the cornerstone for the building of the first church, thus founding the parish.

“The faithful were no longer like sheep without a shepherd,” the bishop noted. “Though it was still a mission station, cared for by priests from Mishawaka, they were now a community and they had a place for worship. The first Mass in the new church was celebrated by Father Oechtering on Oct. 25, 1868. It was a very simple church, since the people were poor. It was only later the next year that they had enough money to plaster the church.” 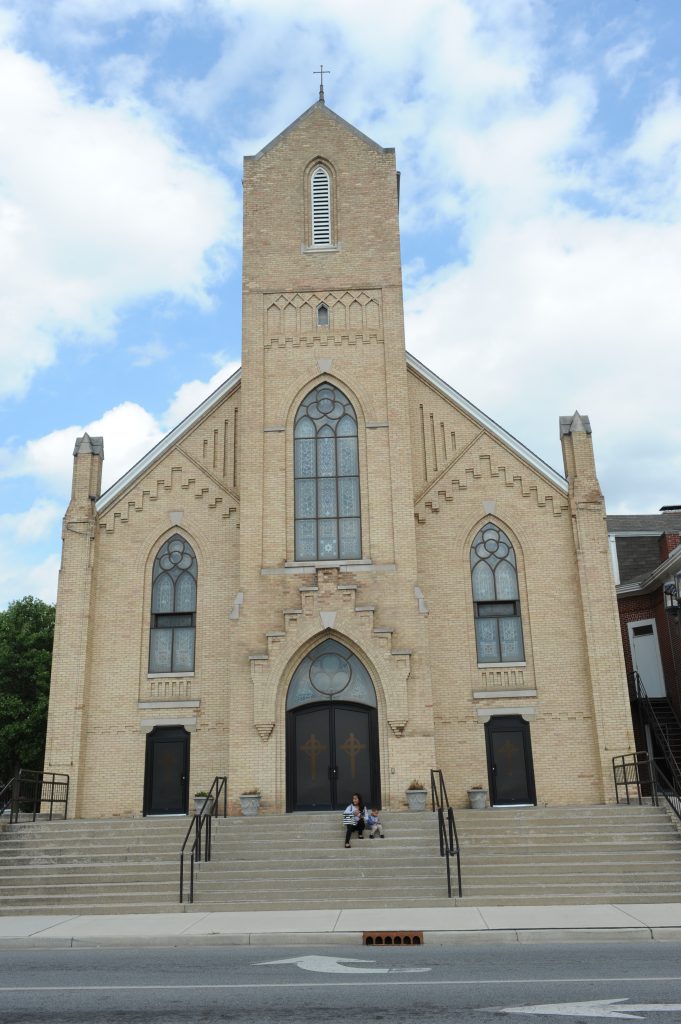 In 1870, Bishop Luers came back again and consecrated the new church: The following year, he appointed a resident pastor to shepherd the congregation. A rectory was built in 1872. A parochial school began in 1881, which Holy Cross Sisters staffed for 94 years, until 1975. The present church was built in 1886, Bishop Rhoades said.

“The parish grew through the years, especially with the wave of Italian immigrants who came to Elkhart in the early 20th century, and then the Hispanic immigrants who began to arrive in more recent decades. The first Spanish Mass was celebrated here in 1991. Your parish community continues to flourish, thanks to your commitment to the Lord and the Church and thanks to the dedication of your priests and lay leaders, teachers and catechists, and all who are active in the works of evangelization and charity here at St. Vincent de Paul Parish.”

“For 150 years, this parish community has been inspired by the example of St. Vincent and has been blessed by his prayers of intercession. On this anniversary, let us ask for his intercession in the present and for the future.”

Bishop Rhoades said St. Vincent’s relationship with the Lord is what motivated him.

“It was his love for God, as we heard in our first reading from the book of Deuteronomy, the commandment to love the Lord with all our heart, and with all our soul, and with all our strength. That is what moved St. Vincent to do the great and small things he did during his 60 years as a priest. His ministry was a response to God’s grace. He was a man of prayer and it was his prayer that led him to action. St. Vincent once said: “Give me a man of prayer, and he will be able to do all things; he can say with St. Paul, ‘I can do all things in him who strengthens me.’”

“St. Vincent de Paul spent one hour each morning before the Blessed Sacrament before celebrating Mass. He visited the Blessed Sacrament before and after his meals, and he would frequently make short visits to the chapel before leaving and upon returning from his responsibilities. Our lives and the ministries of a parish can become superficial without prayer, without being centered in Jesus, in His Word, and in the Holy Eucharist.

“On this 150th anniversary, I encourage you, as individuals and as a community, to be renewed in your spiritual life. Without the Lord and His grace, we can do nothing. But with His strength, like St. Paul and St. Vincent, we can do all things. St. Vincent’s radical and passionate love for the poor came from his radical and passionate love for Jesus,” he said.

“As we give thanks to God today for all His blessings upon this parish these past 150 years, let us pray that He will continue to bless this parish with His abundant love and grace,” Bishop Rhoades concluded. “May our Blessed Mother and St. Vincent de Paul intercede for you, that you may continue to bear faithful witness to Christ here in the city of Elkhart! May God bless you!”

A joyous occasion for parishioners

Theresa Gerwels, her husband Brian and their children have been parishioners at St. Vincent about five years. To her, the day was “a celebration of our heritage of faith that we received from people who left their homes and found a home here in Elkhart.”

“It’s a culmination of a year of looking back — it’s amazing how many souls have come through this parish,” said parish secretary Renee Campanello. 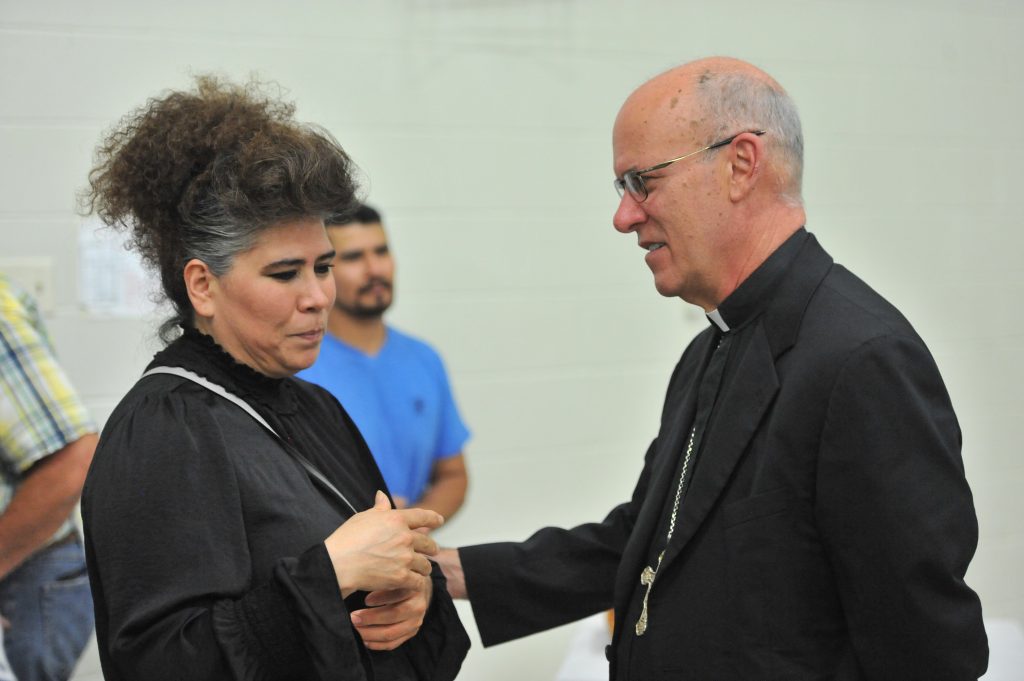 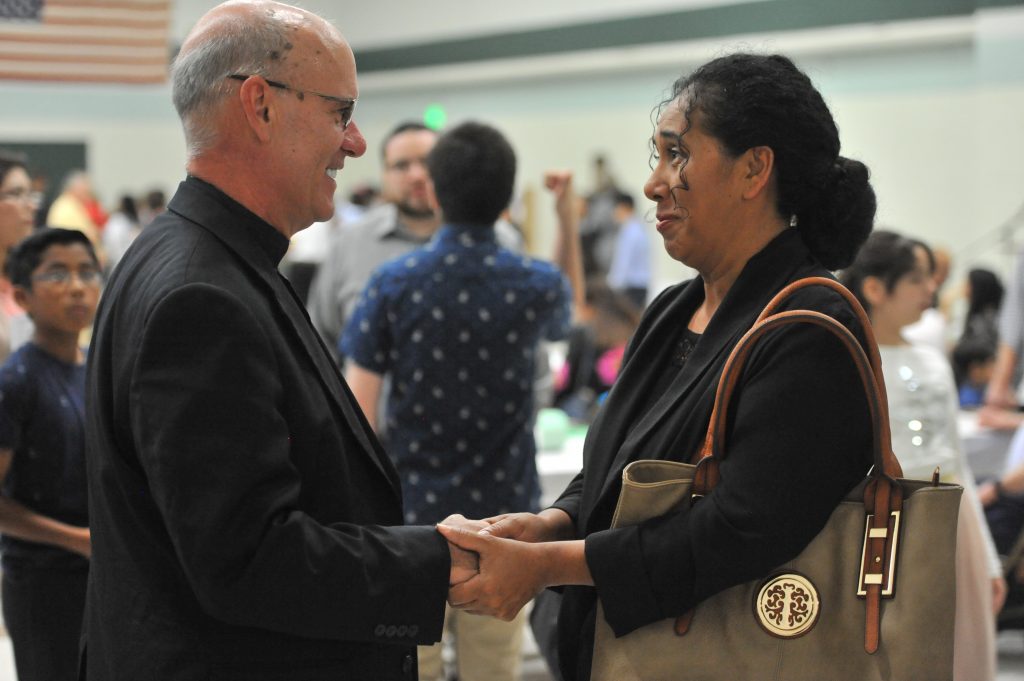 Father Glenn Kohrman visited with parishioners at the reception, and said, “It’s just a wonderful thing to participate in this parish’s rich tradition — it’s so beautiful,” he said. “St. Vincent’s has always been an immigrant church, welcoming everyone and then moving toward a community of people working together. That’s where I think they’ve gotten to here; they’ve crossed barriers and are coming together. That’s what this parish has always been about.”

For Vicki Kalil, the day was even more personal. “It’s a celebration of my family’s history at the parish. George has been here all his life. His parents were married here, we were married here and our daughter was married in this church, so it’s very special,” she said. “We wanted to be involved and give back to all the new families here.”

Father Coonan shared his hopes for the future of the parish, which are: “rooting our faithful more deeply in fidelity and love for Christ; fostering more devotion, especially to the Blessed Sacrament; and evangelizing in our area so our people can bring in others who are disconnected and bring them to know Jesus.”