St. Thomas the Apostle the ‘youngest’ church in Elkhart county 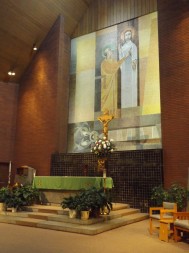 The mosaic behind the altar at St. Thomas the Apostle Church in Elkhart was made in Italy with Venetian glass and was set in place in panels.

ELKHART — Father Jason Freiburger, pastor of St. Thomas the Apostle Church in Elkhart since 2013, said St. Thomas has been mostly identified for its school since the school and church building were combined for the parish’s early years.

St. Thomas was a mission church of St. Vincent de Paul in Elkhart. As the numbers of Catholics grew, there was a need for an additional church. In 1949 St. Thomas parish was founded and Mass was celebrated in what is now referred to as “the old gym”. Bishop Noll blessed and dedicated the school and church on June 4, 1950.

The current church was built and dedicated in June, 1964. It wasn’t until two years later that the beautiful mosaic behind the altar, crafted of Venetian glass by artisans in Italy, was revealed.

Father James Elliott was the first pastor and remained pastor for nearly half of the parish’s history — 29 years. He left St. Thomas in the summer of 1978. Another of St. Thomas’ pastors — Father Bill Sullivan was also at the parish for 14 years. Father Jason Frieburger replaced Father Sullivan. In total St. Thomas has only had seven pastors in its history. 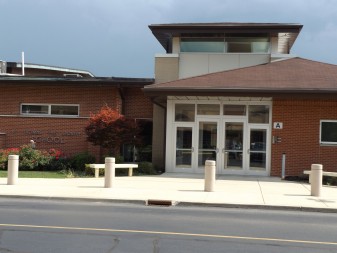 Last school year there were 284 students that included the largest graduating class. Last year was also the first year they had a pre-school for 3, 4 and 5 year-olds.

The school has been in transition in recent years as there have been three different principals in four years. He said the school has been very blessed to have a generous benefactor — a former St. Thomas student who became very successful and willed a legacy to be used directly for the benefit of St. Thomas students. His wishes were for the majority of those funds to be used for science and the arts.

The school held its first auction last year and raised $60,000. The funds raised will be used for new playground equipment, which will be installed in late summer. Funds will also be used for technology in the school — including individual computers for students in grades 6-8 to use in Science and Spanish classes.

Another blessing for the school, according to Father Freiburger, is that most of the teachers are willing to stay after school for tutoring.

St. Thomas has both Boy Scouts and Girl Scouts. The eighth graders take an annual trip to Washington, D.C. and raise funds for that trip.

The school also hosts a mother/son dance and a daddy/daughter dance each year.

Father Freiburger said the school has an excellent PTO group. “The parish support of the school is very generous.” 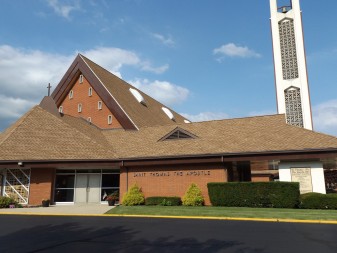 Father Freiburger said the Women’s Care Center is the main focus of the parish and school’s volunteer and charitable works.

The pastor admits they need to strengthen the youth group at St. Thomas and are thinking of creative ways to engage more youth — one idea being tossed around is having a “Dead Theologians Society.”

The young adult group, however, is “leading the initiative in Elkhart County.” The group meets along with young adults from other churches in the county.

For adults, there is a strong Altar Rosary Society with 30 active members. The men have a Sons of St. Joseph group, which meets once a month and is similar to Rekindle the Fire. Deacon Jim Fuchs leads the dozen or so men involved with the group and they share scripture and are currently reading Matthew Kelly’s latest book.

There is still an active men’s Schola group that provides music for Holy Thursday, Good Friday and the third Sunday of Advent.

St. Thomas has a Christian Solitaire group for singles, whether due to death of a loved one or other reasons. They join together for days of reflection, celebrating the Eucharist and social activities. There’s also a bereavement group to help those grieving to find consolation through Christ and others who understand. They meet monthly on the first Sunday of the month.

St. Thomas has an adoration chapel that was originally built in 1999 in the parish center and moved to the church in 2007. It is open Monday through Thursday 3-9 p.m. and Fridays 3-7 p.m.

Like many area churches, St. Thomas is also doing some church renovations. The first phase will begin in a couple of weeks and the floors in the church and sanctuary will be redone, shrines will be added around the altars and the communion rail will be extended. Parishioners will be asked to give input for phase two of the renovations.

Father Freiburger wants to focus on getting the youth group strong again and he’d like to see a vocation come from St. Thomas.

“Adoration helps with that. Prayer is at the core of things here,” he said.