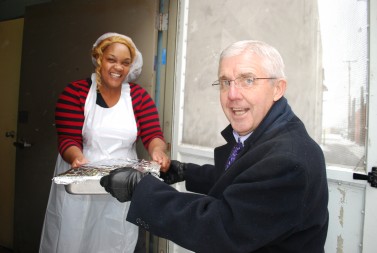 St. Pius X parishioner Jon Housand delivers casseroles from the parish to a South Bend Center for the Homeless employee.

GRANGER — For the past 15 years, St. Pius X parishioner Jon Housand has led a volunteer group that prepares and delivers casserole dishes to the South Bend Center for the Homeless. Begun at St. Pius in 1998 with 30 volunteers, the program has grown to approximately 180 to 190 individuals who share their time, talent and treasure with those less fortunate.

With co-leader Kelley Shrock, Housand went to then pastor Holy Cross Father Peter Jarret, with the idea of delivering casseroles to the Center for the Homeless. After the program was given the green light by Father Jarrett, the co-leaders put an announcement in the church bulletin and with a positive parishioner response, the program was established.

Other organizations around the South Bend area were delivering meals to the center and St. Pius was given a cookbook from a similar casserole program that was started in St. Louis, Mo. The recipes stated that they were to serve 30 people, but Housand found the recipes lacking in flavor and substance.

“There was a Chili Mac recipe and it had two pounds of ground beef to serve 30 people. I decided we wanted to do something more substantial,” said Housand. “If you are homeless and you are hungry you want something that is going to stick to your ribs so that you are not hungry in another two hours,” he noted.

Starting with a Mostaccioli and meat sauce recipe handed down by his mother, Housand, an avid cook, modified the recipe to include five to six pounds of ground beef, tomatoes, tomato paste, pasta, onions and garlic, that Housand emphasized, “tasted good.”

The cost of the ingredients for the large casseroles varies from $25 to $40. Volunteers prepare a casserole about every four months. Shopping for ingredients and preparation of the casserole takes between two and three hours. Although the casseroles are delivered to St. Pius cold, ingredients such as chopped cooked poultry and chopped vegetables are a part of the time preparation.

At the beginning of the program, Housand cooked the casseroles in the parish kitchen and delivered the dishes warm. After delivering the casseroles during one visit to the center he found the casseroles were not used the day of their arrival, but usually a day or two later, so afterward the food was delivered cold.

The casserole program, in addition to the volunteers who prepare the meals, also has callers that remind volunteers of their scheduled drop-off day of prepared food, and six drivers who deliver the casseroles to the center and pick up empty pans to return to the parish.

As of Dec. 31, 2012, Housand stepped down from his leadership position in the casserole program, but still prepares casseroles and delivers them to the center. Shrock has taken over as the coordinator for the program and is appreciative of all of Housand’s effort.

“I have had several major life transitions that have occurred at the same time that he transitioned the program over to me,” said Shrock. “One of the things I had to deal with was the loss of a volunteer driver to take the casseroles to the center. Jon eagerly stepped up to take over the driving for that person and indicated he would be willing to do it for as long as it took for me to find a backup,” she said.

She added, “I can’t tell you how much that meant to me since I had to juggle so many things at once. That is the type of person he is — a real team player. He is very giving and exemplifies what it means to be a Catholic foot soldier for Christ.”

Peter Lombardo, director of community involvement at the Center for the Homeless, noted the impact of the St. Pius casserole program on those that come to the center.

“Our guests — 200 men, women and children plus (during the months of November through March) 30 additional men and women on weather amnesty — have been able to count on St. Pius X members several times a month for six casseroles each time,” Lombardo remarked.
“This is a great benefit for us. Obviously, we’re a private non-profit social justice/service agency, and knowing we can count on church members for those casseroles helps us to control expenses,” said Lombardo. “These days, that’s a true blessing. But there is so much more, and we hear it here as our guests go through the line to get their dinner.”

Lombardo credits Housand for his leadership, the St. Pius volunteers for their time, and the spiritual quality of sharing meals that the program gives guests at the center.

“Jon has coordinated this program for the parish for many years — he’s lined up volunteers to make the casseroles, he’s delivered them to us and he’s contributed greatly to the mission of the Center for the Homeless — to help our guests break the cycle of homelessness in which they find themselves,” said Lombardo. “And he’s been one of the disparate groups who come together (staff, guests, volunteers, donors, and so on) to discover the worth, dignity and God-given potential of each other,” he concluded.