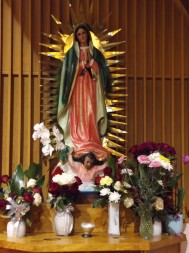 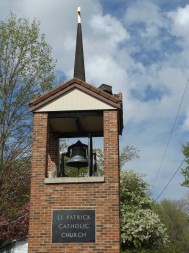 This bell at St. Patrick’s in Ligonier is reportedly from one of the earlier churches.

LIGONIER — St. Patrick Church’s strength is in its community, according to its pastor, Father Wilson Corzo. Father Corzo has been pastor of the parish for eight years.

The parish started as a log built church in 1860 on land donated by the late John Richmond and with lumber donated by the prominent Kenney family. It began as a mission church with a priest coming by train from Kendallville each Sunday. In 1877, two rooms were added to the rear of the church in case bad weather caused the need for the priest to spend the night.

The first resident priest was Father George Lauer, who was appointed in 1897. He was succeeded in 1899 by Father John Francis Noll, who later became the Bishop of the Fort Wayne Diocese. At that time, the congregation consisted of 21 families or 80 people. In 1902 the church was improved and redecorated. In 1930 under Father Ehrman the church was freed from debt.

In 1969, the Oblate Fathers returned to Massachusetts. The parish was then placed under the care of a priest of the Diocese of Fort Wayne and the Rev. Msgr. Arthur McDonald.

Vases of flowers surround the statue of Our Lady of Guadalupe in St. Patrick’s Church in Ligonier. The parish is 95% Spanish-speaking heritage parishioners.

In 1979, with the help of the Kenney Foundation grant, work was started to renovate the former church, located directly across the street from the current church into classrooms for the CCD program at St. Patrick’s.  That program has since been moved to another building. An apartment was also added at the end of the building for the priest to live in. Prior to the apartment being added the parish had become a mission parish again. That changed with the living quarter’s addition and the former church is now a rectory and the church office.

The parish celebrated its 150th anniversary in 2010.

In the mid 1990s, St. Patrick started celebrating Spanish Masses. Father Dale Bauman was the pastor at the time, according to Father Corzo, and had assistance from two Spanish speaking deacons from Fort Wayne. At the time there were approximately 20-30 Spanish speaking families at St. Patrick’s as most attended Mass at Our Lady of Guadalupe in Milford.

Father Corzo said the sense of community among parishioners helps them to strengthen their faith.

St. Patrick’s ministries include Eucharistic ministers, choir, youth group, CCD classes in English and Spanish, men’s group, women’s group, Rosary Sodality and RCIA. During the month of May, the English speaking community will be holding a video presentation of The Story of Mary. 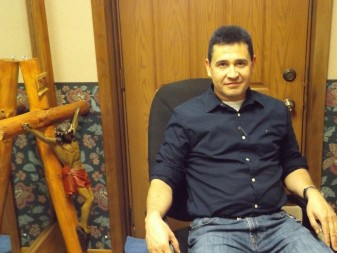 Father Wilson Corzo is the pastor of St. Patrick’s Church in Ligonier. The building which houses his office was once the church. The present church, built in the 1960’s is directly across the street.

There are about 380 registered families at St. Patrick, but Father Corzo is certain the number attending is well over 400. There are 250 students in the CCD glasses, which include first-eighth grades. Father Corzo said St. Patrick has been somewhat of a transitory parish as college and employment opportunities call some young people away.

Deacon Stan LeMieux is assigned to St. Patrick’s and Father Corzo said he does “very good and important work.” Deacon LeMieux is also in charge of the Hispanic Diaconate program and two parishioners are involved — Juan Campos and Ricardo Garcia.

St. Patrick is starting a children’s Mass this month and Father Corzo said it will be once a month for now. The children will participate in all parts of the 2:30 p.m. Sunday Mass.

St. Patrick will hold its annual festival on Aug. 20th this year. Father Corzo said because it’s still cold when their patron saint is celebrated in March they moved their festival to August. The festival features food, music, folkloric dance and many activities. Parish Secretary Linda Ramirez said the event is a fundraiser for the parish.