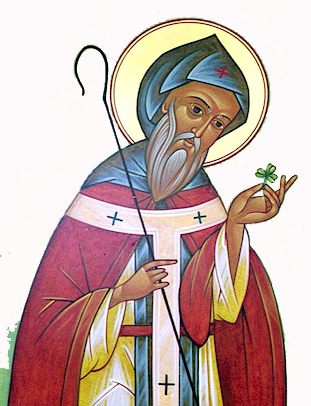 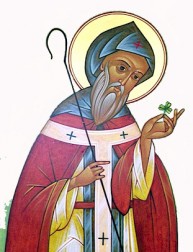 St. Patrick is one of the world’s most popular saints. He’s the patron of Ireland, engineers, Nigeria, the Diocese of Norwich, Conn., parades and all things green.

There are many stories surrounding St. Patrick. A popular folk tale claims he chased all snakes from Ireland. But the story has no historical basis. Another legend, that St. Patrick used shamrocks to teach about the Holy Trinity, also generally is agreed to be a myth. He is said to have stood in ice water up to his armpits while reciting all 150 Psalms by heart. Also, he’s recognized for introducing the Easter fire into the liturgy of Holy Saturday.

In his “Confessio,” in which he wrote of his love for God, Patrick says he was born in a village called Bannavem Taberniae. That village no longer exists, and the location is unknown. It’s widely guessed to be somewhere on the western shore of Great Britain. Other sources say he was born at Kilpatrick, near Dumbarton, Scotland, circa 387, or in Cumberland, England. His parents were Calphurnius and Conchessa. The former belonged to a Roman family of high rank and held an important office in Gaul or Great Britain in charge of the colonies. Conchessa was a near relative of the great patron of Gaul, St. Martin of Tours.

Two authentic letters from St. Patrick, written in Latin, survive, from which come the only universally accepted details of his life. As a boy of 16, Patrick and others were captured by an Irish raiding party and taken near the modern town of Ballymena, Ireland, as slaves to herd sheep. Ireland at this time was a land of Druids and pagans. Patrick learned the Celtic language and practices of the people who held him. During his captivity, he often turned to God in prayer.

Patrick’s captivity lasted for about six years. He escaped after having a dream from God in which he was told to leave Ireland by going to the coast, probably to France. There he found some sailors who reportedly took him back to Great Britain, where he reunited with his family.

He began his studies for the priesthood in the schools of Tours and Lerins, off the French coast. During this time Patrick had another dream in which the people of Ireland were calling him to return. He was ordained by St. Germanus, Bishop of Auxerre, whom he had studied under for years. Later Patrick was ordained a bishop and sent to take the Gospel to Ireland.

He arrived in Ireland on March 25, 433, at Slane. There he suffered much opposition. One story says he met a chieftain named Dichu (or Milchu) of one of the tribes, who tried to kill him. Patrick converted the chieftain after he was unable to move his arm until he became friendly. Patrick’s strategy was to convert chiefs first, who then would convert their clans through their influence.

Patrick preached the Gospel throughout Ireland. He had many disciples, who preached and converted all of Ireland for nearly 40 years, urging the people to greater holiness in Christ. Patrick ordained many priests, divided the country into dioceses, held Church councils, founded several monasteries and began building churches throughout the country.

Patrick worked many miracles. After years of living in poverty, traveling and enduring much suffering, he died in a monastery, ironically in strife-torn Ulster, County Down, in Northern Ireland where he had built the first church.

Patrick really isn’t a saint with a capital S, having never been canonized officially by Rome. That’s because there was no formal process for canonization in place when Patrick died. For the first millennium of the Church, canonizations were done at the diocesan or regional level. When exceptionally holy people died — martyrs were considered saints for having given the ultimate sacrifice — the local Church affirmed liturgically they could be celebrated as saints. That was the case with St. Patrick, whose feast has not been dropped from the Church’s universal calendar.