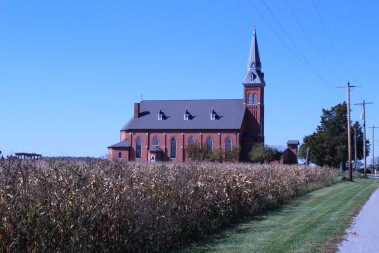 ARCOLA — St. Patrick Catholic Church has been a landmark in the tiny village of Arcola for a century and a half, drawing Catholics from Fort Wayne and many smaller communities nearby. The church steeple can be seen for miles across the lush farmland, drawing the faithful to worship.

St. Patrick Parish dates back to 1845, when then-vicar general of the Fort Wayne diocese, Msgr. Julian Benoit, began holding services for area Catholics in the home of Victor Munier. This continued for many years until the parish was officially established in 1862 and placed under the care of Father P.J. Jadden, its first pastor. Father Henry Schafer and Father Theodore Van Der Poel followed in quick succession. Then parishioners build the first church and priest’s residence on the grounds in 1868, and established nearby Calvary Cemetery that same year.

Father Theodore Wilken was appointed pastor in 1872, then Father Bartholomew Hartman in 1880, when the first school building was erected. At that time 75 families called St. Patrick’s their home parish.

One early pastor who stands out in church history is Father Robert Pratt, who persuaded Sister M. Hyacintha Neurath, provincial of the Poor Handmaids of Jesus Christ, to bring her fellow sisters to teach the 39 students enrolled at the parish school. Father Pratt also laid the cornerstone for the present-day church, which was dedicated by Auxiliary Bishop John Guendling in 1899. Along with Father Wilkin and parish families, Father Pratt also donated money for the stained glass windows of the new edifice. Total cost of construction was $10,934.

Several more pastors oversaw growth of the new church at a time when parish societies included Rosary Society for married women, Children of Mary for single women and St. Aloysius Society for single men. It is also reported that pew rent supported the church. 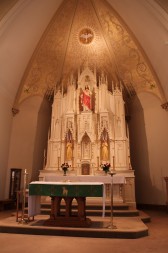 By the 1920s St. Patrick Church and rectory were supplied with electricity. A parking lot was paved in 1936, an organ was installed in 1939 and the church was redecorated in 1941 at a cost of $2,275. Parishioners celebrated St. Patrick’s diamond jubilee the following year.

In 1951 Father Jacob Bick laid the cornerstone for a new school building to replace the original one, which was heated only by a wood stove and had no running water or restrooms. The cost of construction was $36,150, added to a new convent for the sisters at a cost of $17,500. But sadly, by 1969 the school had to be closed when the teaching nuns left the area and returned to their motherhouse.

Years passed as new pastors arrived, then left St. Patrick’s. In the 1990s Father Eugene Koers was appointed just in time to oversee a huge renovation project. New paint, carpet, roofing and sound system were installed and the stained glass windows refurbished in order to celebrate 100 years in the church building first erected in 1899.

The year 2001 brought the arrival of Father Cyril Fernandes, on assignment to the parish from the Diocese of Jamshedpur, India, who began an eight-year stint at the rural church. An affable and engaging cleric, he drew many parishioners to the small country parish at a time when the city of Fort Wayne was growing steadily westward. Expansion became necessary once again as the parish population grew from 160 families to nearly 400.

A new rectory was built for him and future pastors, while ground was broken for a new parish hall. Officially opened and dedicated by then-Bishop John M. D’Arcy in 2007, the hall featured badly needed classrooms for religious education, parish offices, library space and conference rooms. An infant cry room and new restrooms were constructed in the adjoining hallway.

With Father Fernandes’ re-assignment in 2009, the Diocese of Jamshedpur once again provided a pastor for St. Patrick’s. Now Father Alex Dodrai has joined the ranks of clergy who will provide spiritual leadership for the Catholic community of St. Patrick’s, Arcola, into its next half century. 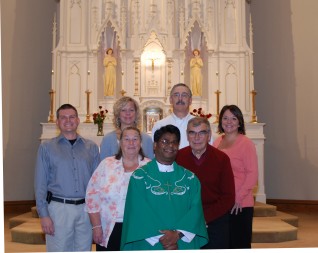 ARCOLA — The Catholic parish of St. Patrick in Arcola may have its roots in the mid-1800s, but its outlook is rosy and its population is growing well into the 21st century.

The parish will celebrate its 150th anniversary on Sunday, Oct. 28, when Bishop Kevin C. Rhoades will celebrate the 10 a.m. Mass, followed by a reception and dinner in the parish hall for parishioners, previous pastors and other invited guests.

Father Alex Dodrai, the most recent in a long line of pastors at the small rural church, calls it “a wonderful parish,” where “the people are very loving, very generous.” Indeed, it appears to be thriving, with a parish population of more than 400 families and activities for members of all ages.

Parishioner and church historian Jim Bottone speaks highly of their Knights of Columbus chapter, an 80-member organization, which supports several charities locally and around the state. One institution, which benefits from their generosity, is the Gibault School for court-appointed children in Terre Haute. The group also boasts “Support our Seminarians,” a project that provides funding not only for local priests-in-training but those in Father Dodrai’s home diocese in India as well. The K of C members also provide labor as needed for the church, recently completing a painting project. Bottone says, “We’re very much at father’s call.”

Many women in the parish are active in the long-standing Rosary Society. Father Dodrai calls it “a nice corps of older and younger women … who do a very good job.” He acknowledges that the ladies run the parish’s most successful fundraiser, the annual fish fry. “People really enjoy our fish fry,” he says with a big smile.

Father Dodrai is also proud of the religious education program, with a current CCD enrollment of 180 students and 28 volunteer catechists. Young parishioners are also active as altar servers. They are said to be very reverent and respectful due to the training of Nick Schortgen.

The parish is fortunate to have an active teen group, headed for years by Gus and Roxann Trahin, which recently took an extensive religious trip to a Mount Saint Mary’s Seminary, the Basilica of the National Shrine of the Immaculate Conception in Washington, D.C., and St. Patrick’s Cathedral in New York City.

The music ministry is in good hands at St. Patrick’s. Each Sunday the parish enjoys the talent and dedication of music director Trebor Trahin and the church choir. He follows on the heels of two women, Francie Strack and Rosina Harber, who together dedicated more than 60 years to organ duties at St. Patrick’s.

Those parishioners who are widowed find companionship with the Irish Loners, headed by Barb Brown. It is a social group that meets regularly for lunch and bingo.

“Manalive” appeals to men in the parish and Bible study groups are open to all.

The generous spirit of St. Patrick’s is very much in evidence, says parish administrator Patty Denihan. She happily points out that the parish Confirmation class sponsors a Giving Tree each year at Christmas, which benefits the Women’s Care Center. “We take carloads of items … it’s so beautiful,” she says.

Another vital parish ministry is the food bank, supported entirely by parishioners, which is open every day to those who need a little assistance. Though it’s not widely advertised, Bottone says, “Everybody in the community and parish knows it’s here.”

St. Patrick’s also reaches out to the elderly and those confined to nursing homes. Father Dodrai offers Mass each month at Renaissance Care Center near the church and spends each Monday visiting homebound parishioners.

The small burial ground originally established as Calvary Cemetery in 1868, now called St. Patrick’s Catholic Cemetery, still stands just a mile and a half from the church. It has been tended by the Bob Corbat and the Dave Williams families since its inception. Those two families along with other volunteers handle all mowing, maintenance and funeral duties. Denihan says it is an important ministry for the parish.

Priscilla Van Allen has acted as parish housekeeper for 30 years and kept the buildings spic and span as her parish ministry. Pastors over the years have expressed their gratitude for her conscientious attention and dedication.

Mostly, St. Patrick’s is a parish of willing volunteers. Father Dodrai calls it a “very homely parish,” referring to its home-like atmosphere. He says, “People are very cooperative and supportive.” Bottone, a conservative Catholic, recalls looking for a small parish when he joined, a place where he could be comfortable, “sit back and enjoy Mass” with a friendly, welcoming group of fellow parishioners.

Denihan, a lifelong parishioner, agrees that St. Patrick’s is a parish of volunteers. “We have what we have here because of the holy and wonderful priests.” But, she adds, “the priests come and go, the people don’t. …” The people are the spiritual heart of the parish, “the center of it all.”