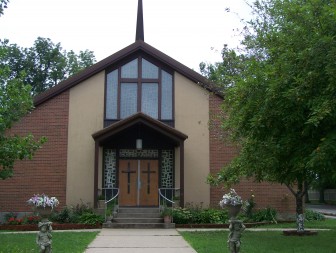 This is the front of the current St. Patrick's Church in Ligonier as it is today. The grounds of the church are beautifully landscaped and include a church bell and a garden dedicated to Our Lady of Guadalupe.

LIGONIER — St. Patrick’s Church in Ligonier has gone through lots of changes since its inception as a log built church in 1860.

The church was built on an acre of ground donated by the late John Richmond on what is now North Martin Street. The 30×60 building was built from lumber and logs from what is commonly known as “The Knobs” located north of Ligonier.

Most of the lumber was donated by the prominent Kenney family of Ligonier, who were also one of the oldest members of St. Patrick’s congregation. The church was heated by a large pot bellied stove.

The church began as a mission church with a priest coming from Kendallville each Sunday. The priest arrived on a train called “The Plug,” which consisted of two passenger cars and an engine. The train would bring the priest early in the morning and then after Mass and lunch he would return to Kendallville.

Several of the families, including the Cliffords, Yorkeys and the Summers would make sure that the priest had a good lunch before boarding the train in the afternoon.

In 1877 Father Dueling added two rooms to the rear of the church for living quarters in case bad weather made it necessary to stay over. The first resident priest was Father George Lauer, who was appointed in 1897. He was succeeded in 1899 by Father John Francis Noll, who later became the bishop of the Fort Wayne Diocese.

At that time the congregation consisted of 21 families or 80 people. In 1902, the church was improved and redecorated. In 1930 under Father Ehrman, the church was freed from debt.

In 1945, the original log church and property was sold to the Merriel Hire family. It was then sold later to Frick Lumber Company who had it just one year before selling the property to Bob Kidd of Kidd and Co. who made a parking lot where the original church stood.

New church
It was while Father Linnehan was pastor that the present church building was started on Oct. 15, 1966. The cost was $120,000 and the church was built with a seating capacity of 400. The new church was ready for Mass on Christmas Eve of 1967.

In 1969 the Oblate Fathers returned to Massachusetts. The parish was then placed under the care of a priest of the Diocese of Fort Wayne. Msgr. Arthur MacDonald took over the parish on June 16, 1969 and stayed six years.

After Father MacDonald, Father Frank Kronewitter became pastor and was pastor when the church celebrated its 125th anniversary. In 1979 with the help of the Kenney Foundation grant, work was started to renovate the former church, located directly across the street from the current church into classrooms for the religious education program at St. Patrick’s. That program has since been moved to another building. An apartment was also added at the end of the building for the priest to live in. Prior to the apartment being added, the parish had become a mission parish.

That changed with the living quarter’s addition, and the former church is now a rectory and the church office.

In the last decade the church has seen a large increase in the percentage of Hispanic/Latino members. Church secretary, Linda Ramirez, said that the parish is about 90 percent Hispanic, 10 percent Anglo. In the summer the nearby lakes bring additional tourists to attend Mass.

LIGONIER — Parishioners at St. Patrick are looking forward to this Sunday — Bishop Kevin C. Rhoades will celebrate Mass for the parish’s 150th anniversary.

The celebration is being planned by a committee of parishioners chaired by Leticia Pena and including Connie Davis, Stan Lemieux, Daniel Silva, Jaime Picana, Elvira Ibarra, Sergio Herrerra and others.

Bishop Rhoades will join the parish for the 10:15 a.m. Mass in English and the 12:30 p.m. Mass in Spanish, followed by a picnic and potluck on the church grounds.

Two bands — the John Ness Band and Las Patitas (Temo) will provide musical entertainment throughout the celebration. At approximately 3:30 p.m. folkloric dancers will entertain the parishioners followed by the St. Patrick’s Danzantes — dancers who, according to Pena, “praise the Virgin Mary” through dance.

Bounce houses for children and other activities will be available so that parishioners “have a good time”, Pena said.

“Music is very important” to the celebration of the Eucharist, Father Corzo said.

Father Corzo came to St. Patrick’s from St. Vincent de Paul in Elkhart. He said at first some of the parishioners were hesitant to get involved and some people find change difficult.

“There were many changes in pastors here before I came — four pastors in three years,” Father Corzo said.

The reason for the frequent changes was the priests were from other countries — India and Mexico for example, and it was time for them to go back home.

But he said as time has gone on, parishioners have become more involved. He said the youth of the parish are very involved.

His hopes for the future of the parish include more involvement and more members from the Anglo community — he’d particularly like to see young Anglo families joining the Church.

He said the Ligonier community is a nice, quiet community and he attributes the growth of the Latino population to that and the big families that like to live close to each other. He said most go out of town for employment.

Father Corzo said he’d also like to have a new parking lot in the future and more space for the youth to meet for activities. In the summer they meet outside for some activities but space is limited for indoor meeting space.

“The (St. Patrick’s) community is working well now; we have very good people here,” he said.