Making a nearly two-hour drive to visit a former pastor is a thoughtful gesture that demonstrates gratitude for the vital role priests play in the lives of the Catholic faithful. That’s what a handful of parishioners at St. Monica in Mishawaka did for Father Bill Sullivan, now pastor of St. John the Baptist, New Haven, on Feb. 8.

It was not the anniversary of his ordination or his birthday. He was not ill or hospitalized. It was just an average Saturday evening Mass for Father Sullivan. But members of St. Monica wanted to recognize the efforts of their former pastor, who served at the parish for 12 years, from the late 1980s until the late 1990s. 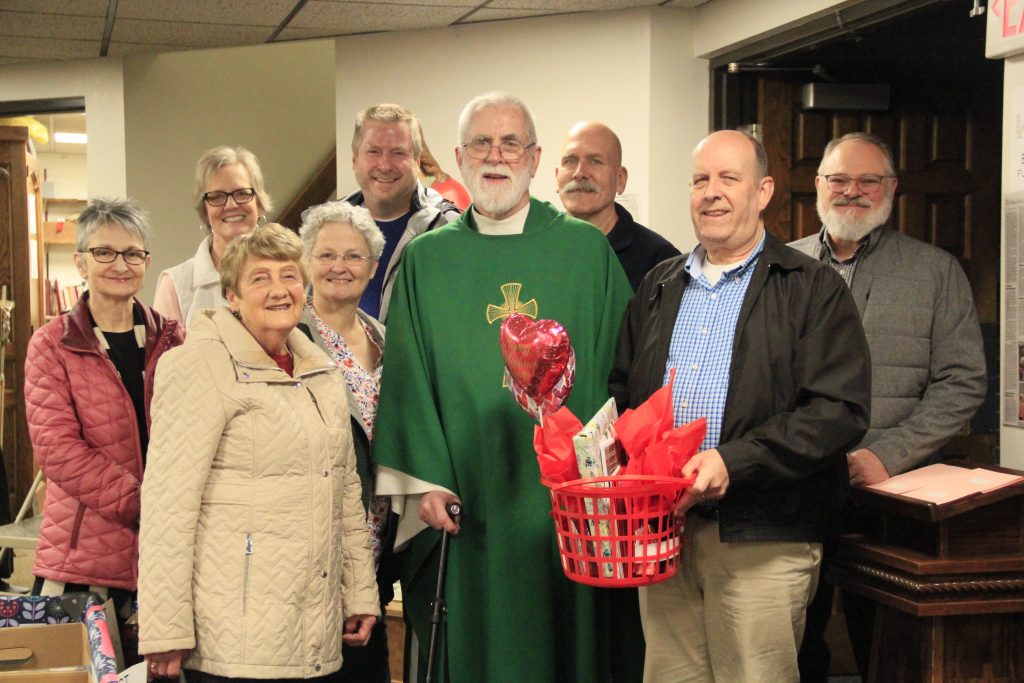 Jennifer Barton
Members of St. Monica Parish in Mishawaka reach across the diocese Feb. 8 to show appreciation and support to former pastor Father Bill Sullivan, now serving as pastor of St. John the Baptist, New Haven. They call the initiative “Valentine Your Priest.”

Will and Kathy Braniff were the heart behind the idea that they call “Valentine Your Priest,” which began last year when seven couples went to St. Louis, Missouri, to visit a retired priest who had previously been active at St. Monica. “They’re there for us, so we wanted to acknowledge them,” Kathy said. “Too often we don’t recognize what they do.”

The Braniffs had no idea how many people would make the drive to Fort Wayne with them on a wintry Saturday. They wanted to keep the event low-key and make their visit a surprise for Father Sullivan, although Kathy did contact the parish secretary at St. John ahead of time to ensure that everything was set on the New Haven side for their visit.

Will and Kathy have been members of St. Monica for many years; from 1985 until 2010, when they moved to Indianapolis, and again more recently when they returned to Mishawaka. The idea to show appreciation to their priests came to Kathy when the death of their pastor in Lebanon, Indiana, impressed on her the importance of honoring the men while she had the chance. “The ‘be kind’ movement, I believe, should be a ‘give honor’ movement. We honor all the things our priests do for us. This is an act of honor.”

Boxes were placed at St. Monica, along with St. Thomas the Apostle Parish in Elkhart, weeks in advance so parishioners could drop off cards. Father Sullivan served at St. Thomas after leaving St. Monica. Kathy picked up the boxes on the Thursday before the scheduled trip.

Katie Rohrer, St. Monica parish secretary, agreed that it was important to take time to honor the contributions of their former pastor. She wrote a card and joined the group headed southeast to visit Father Sullivan, whom she credits for helping to bring her husband, Wendell, into the Church.

“It was a very timely letter from Father Bill that encouraged him to give it a try and come to RCIA,” Katie said. Though there were other “divine signs,” urging Wendell in that direction, it was the letter that she said “sealed the deal.”

Kathy recalled the times in her life that priests were present to share her life’s joys or to comfort her in sorrow. For many of her 39 years of marriage, she has sent a card to the priest who presided at their wedding.

Aside from sending cards, she knows that prayer is the most powerful gift she can give priests. “I say a decade of the rosary every night for our priests.”

About a dozen St. Monica parishioners braved the snowy weather to attend the Saturday evening liturgy at St. John. At the end of Mass, unaware of what was to come, Father Sullivan asked the group to stand and be recognized by his current congregation. When Mass was over, the group approached him with a festive basket and announced that they were there to “Valentine your priest.” Joy shined on Father Sullivan’s face as he accepted the basket of cards and well-wishes from former parishioners. He professed himself “stunned” at the outpouring of love.

Father Sullivan delighted in the company and admiration of the group, speaking individually with each member. He asked them about aspects of their life that he remembered from many years ago, sharing in their life stories. At the same time, Katie gave them a gift to thank them for coming. “He deserves this,” she said happily.

And what better time than Valentine’s Day to show love to priests who have made an impact in one’s life? St. Valentine was said to be a Roman priest who was martyred for his faith under the reign of Emperor Claudius II. It is believed that he secretly performed marriage ceremonies for Christian couples.

One worshipper Saturday night recalled that it was Father Sullivan who married her and her husband. “It’s something you don’t forget,” she said.