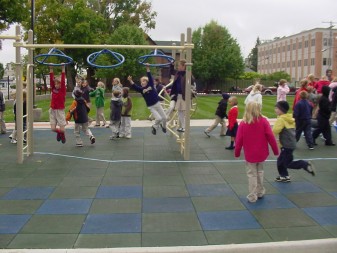 The school children of St. Michael, Plymouth, celebrate the opening of their new playground on N. Michigan St. The dedication and opening ceremonies were on Sept. 29, St. Michael’s feast day.

PLYMOUTH — “Pray to Play” was the slogan of the fund-raising drive to create a St. Michael School playground open to all children in the community. Randy Danielson, co-chair of the project with Tom Flynn, said that the dream was “20 years in the making.”

Flynn added, “We toured the Kings Kiddie Kollege with three different priests and could never come to terms with the owners.” And then things started to happen.

In 2005, Betty Miller made it possible for the church to purchase the Wainscott home at 613 N. Michigan St., in loving memory of her husband Harry. “He would have wanted to do that for the children,” she said.

A year later Dennis Emmons bought the house for $1 and moved it to 1000 N. Center St. “That’s when we went into the planning phase,” Flynn said. “We revised the plans at least 13 times,” Danielson said, “starting with one quarter of a block.”

John J. Oliver, a non-parishioner, was talking to Father William Kummer about his dream of a playground for the children. Oliver asked what he could do to help. The Oliver family and U.S. Granules, gave a generous gift to fuel the first phase.

Next, Leonard and Joann Isban challenged the committee to raise matching funds for their magnanimous gift.
“We had six weeks to raise the money,” Danielson said. 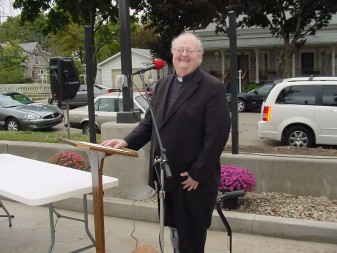 “It was a little bit scary,” Flynn said, “but we figured with a whole lot of help and prayers we could do it.” And, with contributions from the congregation and a couple of fundraisers, they did. Danielson made a bid “they couldn’t refuse” for the brick structure at 601 N. Michigan. The deal was closed the first week of June — one year from the first meeting of the parish committee.

“And with that,” Danielson said, “the scope of the project changed yet again.”

They went from — to a full city block and from a playground that was hard scrabble and dirt with two bent-over basketball hoops and a crooked tether ball pole to a vision of a safe and challenging playground for all children.

The Poor Handmaids of Jesus Christ were invited to make a donation toward the project.

Sister Nora Hahn, provincial of the order, said that instead of giving a monetary donation, “we would like our gift to match our values.”

The sisters’ plan, following the principles of their Earth Charter, adopted in 2006, calls for the recycling of all usable materials. “It was a lot more work, but didn’t cost much more,” Sister Hahn said. Workers recycled the house.

Soon small social gatherings were held in parishioners’ homes and on two nights volunteers conducted a phone-a-thon, calling over 300 people to ask for their help.

“We thank God, the parish and the community,” Danielson said. We were given funds from, among others, the Marshall County Community Foundation and the City Improvement Commission.” Bricks for a memory walk were sold to families and individuals at $100 and $200 apiece. Flynn enumerated the labor, materials and gifts from members of the church and non-Catholics alike.

Will and Dixie Lawrence made it easy to switch from a cheaper surface to Pervious Concrete, making the playground safer for the children. Rick and Barb Miller’s Rickscape provided irrigation and sod for the soccer and volleyball field and Prices Nursery did the rock work and exterior landscaping on Michigan street. Several City of Plymouth departments such as water and street workers and various public utilities cooperated with the builders.

Father Kummer especially wanted to be good neighbors with the residents on Michigan street, and the planners went the extra mile to provide quality landscaping, attractive wrought iron fencing and good lighting for the entire block.

Thanks to a surprise donation of $22,000 from Betty Miller at the dedication on Tuesday, the project ended in the black.