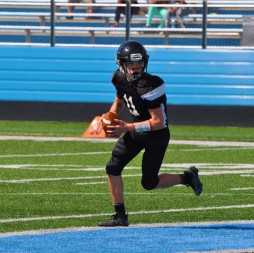 ICCL Game of the Week:

A moment of silence hovered over Father Bly Field Sunday, Sept. 11, as fans reflected on the anniversary of 9/11 prior to the kickoff of the 2016 Inter-City Catholic League, which would pit crosstown rivals, the Blazers of St. Matthew and the Westside Catholic Cardinals, against each other. The athletes were born after the infamous day in the country’s history, but the wounds were still seen on their faces as they donned their helmets.

Both teams started this season’s campaign with confidence and the lofty goal of a championship, but knew it would be won on the field and not through stat sheets and pre-game hype.

The Cardinals began the game with a promising field position and a solid plan to attack the Blazers. However, linebacker Bryce Martens would make his presence felt early by stopping Dean Ernsperger deep in the backfield and then making an open-field tackle on running mate Klayton Coleman on fourth down just before the yard markers.

The Blazers then put on a demonstration utilizing their “Big Three” — Isau Gonzalez, Joey Barkowski and Martens — who methodically marched down the field, moving the ball inside and outside for a five-play touchdown drive capped off by a quarterback sneak to paydirt. The extra point run was stuffed by the Cardinal defense, making the score 6-0 with 1:55 remaining in the first.

The Blazers got the ball right back and kept it from the Cardinals, as the pounced on a pooch kick at the 38-yard line.

More of the same ensued as the Blazers spread the ball around. Highlights included a three-yard gain by Caleb Lusanga on a fourth and one, and then a 14-yard stampede by Gonzalez and his black-shirted offensive linemen as he eventually stumbled into the end zone.

Trickery was still in the Blazer playbook, as the team again hopped on its own kickoff and started at midfield.

The next series would be the Barkowski show. He accounted for the 50 yards, with a run of five and 45. He also added an extra point run as the Blazers scored 19 unanswered points in a span of just over three minutes.

The Cardinals, desperately seeking some rhythm, instead found Gonzalez on the receiving end of quarterback Breydon Zelinski’s errant pass on the third play of the drive.

It wouldn’t take the Blazers long to capitalize on the miscue, as Martens outsprinted the Cardinals on a 52-yard jaunt into the end zone. Martens then used his arm to find Ben Balderas, making the margin 26-0.

The Cardinals looked like a new team after intermission, as their defense pushed the Blazers into a 4th and 15. However, Martens had other ideas. He bolted for a 55-yard touchdown, ending his day on a high note.

The Cardinals didn’t hang their heads, but instead used the opportunity to go on an 11-play, 54-yard march composed of carries from Zielinski, Sammy Sierra and Coleman. They capped off with a two-yard touchdown from Johnson, to end the scoring of the contest at 33-7.

“The Blazers were fundamentally sound and put together a good game plan. We made some adjustments and our kids responded in the second half,” quipped Cardinal Head Coach Giles Horban. “We expect big things from our team. We will talk and work on the positives as well as the negatives and be competitive in week two.”

“We were concerned about the matchups, but our big three really played well — as did our team,” said Blazer skipper Ben Domonkos. “We spoke to our kids and told them everyone has a plan until they get punched in the mouth. It’s up to us to respond to that initial contact.”

In other scores around the league, the Mishawaka Catholic Saints fought Osceola Grace to a tie as Quentin Nelist scored on a two-yard burst. The Panthers of St. Anthony, behind scores from Charlie Peterson and Walter Wesson, held off the Crusaders of Holy Cross and Gavin Stefanek, 12-8.