At a time when Catholic schools in the U.S. are suffering the consequences of low enrollment, St. Joseph School in Garrett is a reassuring tale. An outreach program of the parish has been so successful that the parish school has had to expand its preschool program for the fall.

Garrett is a small town nestled in a rural area. Its Catholic school dates back to the 1880s and at one time comprised first through eighth grades.

Over the years, a decreasing number of students forced the discontinuation of the seventh, eighth and most recently, sixth grade classes — the latter of which contained only three students. But the pruning appears to have encouraged fresh growth at the base of the educational program.

“Father Jim (Shafer) is really the driving force behind this,” said principal Jenny Enrietto. Father Shafer, a graduate of St. Joseph, since his transfer to the parish as pastor has taken an interest in the school, particularly to increase its enrollment so future generations can benefit from the same quality Catholic education as he had.

To do this, Father Shafer looked toward the youngest school-age children: preschoolers. Through a grant from the Mary Cross Tippmann Foundation and two gifts from parishioners of St. Joseph and Immaculate Conception in Auburn, the school has been able to add two new preschool classrooms to the old convent, which had been transformed into a combination preschool and parish office.

Prior to the renovation, the preschool was housed in one large room, which was also used for after-school care.

“These two rooms will enable us to grow the preschool program and facilitate programming with both half-day and full-day students, ages 3 and 4,” Father Shafer said. The upgrade will include a sensory floor that Enrietto sees as necessary for both school-age children and preschoolers.

Additionally, a parking lot was created so teachers will no longer have to park on the street, and the school board will install new playground equipment there for the preschool children. This will prevent teachers from having to take young students to the city park across the street from the church for recreation.

A grant allowed for a fence to be built around the playground and a dishwasher and washer/dryer to be purchased so toys and clothes can be washed and sanitized at the school instead of sending soiled garments home. 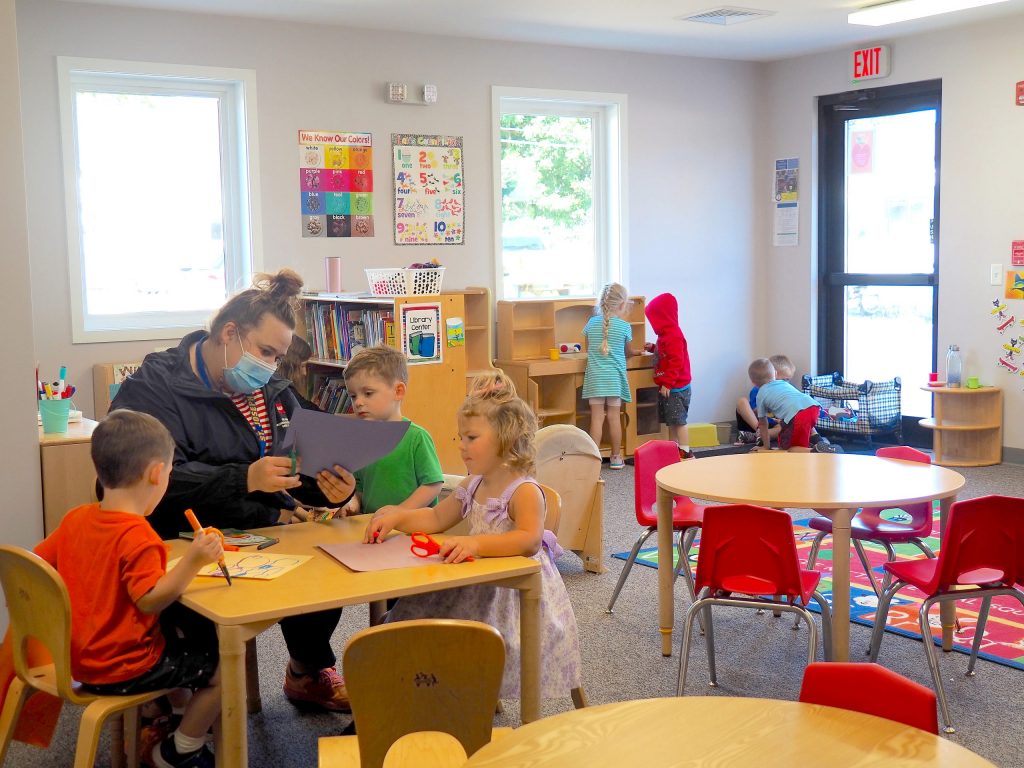 Jennifer Barton
New preschool classrooms at St. Joseph School in Garrett allow the school to enroll around 30 children in the program. An expansion of the pre-K program debuted this fall and is already seeing robust enrollment.

St. Joseph School participates in Indiana’s “On My Way Pre-K,” a program that assists families with the cost of educating preschool children and preparing them academically for kindergarten-level learning. There are four levels of certification to the program. St. Joseph is currently at Level 3, preparing to move up to Level 4 with the completion of its upgraded facilities.

“Our efforts to emphasize educating the youngest children has already shown some success … preschool took a jump from 17 to 29 students,” said Father Shafer.

Kindergarten enrollment has also increased from last year’s numbers; from 10 students to 20.

Father Shafer continued, “I want to add a word about the quality of our small school. For the past 11 years, we have been rated an “A” school by the State of Indiana, including this past year when so many schools dropped in scores and the grades were not released to the public. During the more recent of those years, our school was also named a Four Star School by the state twice.”

St. Joseph is the only Catholic school in DeKalb County. Enrietto noted that it receives students from five parishes: St. Joseph, Garrett; Immaculate Conception, Auburn; Immaculate Conception, Ege; St. Michael the Archangel, Waterloo; and St. Anthony of Padua, Angola. Some students even come from the north side of Fort Wayne. St. Joseph also collaborates with St. Mary of the Assumption School in Avilla so students have the option to continue their Catholic education in sixth through eighth grades.

St. Joseph preschool teachers are state of Indiana certified, but Enrietto noted that they have gone beyond the minimum qualifications. “They don’t just have the preschool qualifications, they’re actual, licensed teachers.” Adrienne Spare and Jill Marshall teach the 3- and 4-year-olds, respectively, and their experience and charisma draw parents to the program, Enrietto said.

New to St. Joseph School this year, Molly Roman decided to enroll her children for a number of reasons. “At the most basic level, we were drawn to St. Joe for its simplicity, small community and general warmth,” she said. “We were also prayerful about this choice and had confirmations that this was the school God wants for our children. Every time I doubted our choice for St. Joe, God randomly put someone in my path who attends, and they gave glowing reviews … It’s a great school that’s a relatively undiscovered gem. We are truly grateful to have found it.” Her twins began kindergarten earlier this month.

While the COVID-19 pandemic has caused a slight drop in total school enrollment, Enrietto is hopeful that more families will return “when the time is right for them.” She also stated that with the small class sizes, social distancing is not a problem at St. Joseph, and the grants they have received have provided for new classroom technology, along with tablets for each student.

A separate grant enabled the school to begin a robotics program for first through fifth grade students.

“We feel blessed to open our doors to students again,” Enrietto stated. “Parents and kids are thrilled to be back in school.”