Pilgrimage has long been a part of Catholic tradition. It has roots in Jewish history, where the Israelites were expected to make yearly pilgrimages to Jerusalem for festivals, particularly Passover. Sometimes, people think of pilgrimages as long, costly, involved voyages they cannot afford to undertake: However, a collaboration between the Diocese of Fort Wayne-South Bend and the two St. Joseph parishes in South Bend and Mishawaka will provide a local pilgrimage opportunity in honor of the holy spouse of Mary.

The full length of the pilgrimage is 5 miles, but there are three additional locations where participants who prefer a shorter walk can join: the parking lot at Veteran’s Memorial Park at 10 a.m., Joe Kernan Park at 10:30 a.m. and Howard Park around 11 a.m. All times are estimated.

Free bus shuttles to all four parking areas will be provided for the return trip.

It was intentional that the Way of St. Joseph pilgrimage came to fruition during the Year of St. Joseph in an area so steeped in the saint’s honor. The county, river, churches and numerous organizations in the area bear his name. “Clearly, the Holy Spirit was at work” in the namings, stated Will Peterson, one of the event organizers. 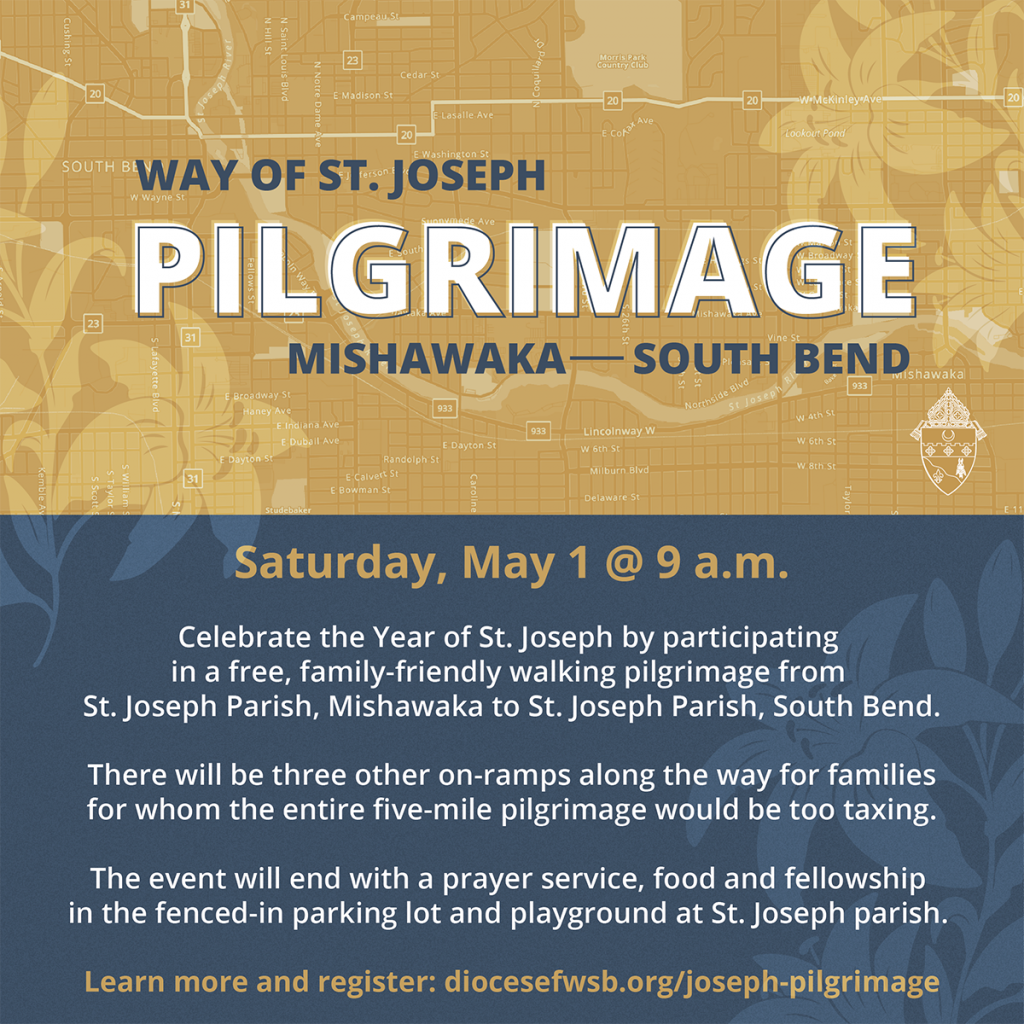 Peterson founded a nonprofit organization called Modern Catholic Pilgrim after he experienced the power that pilgrimages can have on one’s life. Last year, MCP led a young adult pilgrimage from Christ the King Parish to St. Joseph Parish in South Bend, and Peterson saw the potential for a similar one linking the two parishes named for St. Joseph, both along the Riverwalk. He reached out to the two parishes and to Sean Allen, director of Young Adult and Campus Ministry, to inquire about arranging one centered around one of the saint’s feast days.

“Being the Year of St. Joseph, everyone was trying to plan something to celebrate it,” Allen stated. The idea of an outdoor event that could serve the entire area, rather than simply a single parish or organization hosting an event, greatly appealed to the collaborators. “It has just been snowballing with support.”

The solemnity of St. Joseph, March 19, was first discussed as a potential date, but with Indiana’s unpredictable late-winter weather, a later date was more appealing. Because the pilgrimage was intended for everyone, the diocesan offices of Marriage and Family Ministry and Young Adult Ministry joined with MCP and the parishes to help coordinate it. The Hispanic Ministry is reaching out to those faith communities as well, ensuring that all are invited to the devotion to St. Joseph.

Families are especially encouraged to attend, and parents can aid young pilgrims focus on the spiritual meaning of the event by having them carry an item such as a prayer card, drawing or prayer intention.

“I believe firmly that pilgrimage, especially walked pilgrimage, is a tremendous mix of old and new,” Peterson said. “It is one of our oldest prayer practices as Christians.” The goal of his organization is “to have pilgrims running back to everyday life on fire and ready to change themselves and others.”

Peterson considers the location of the two parishes to be providential and hopes that Catholics can increase their devotion to St. Joseph by making a pilgrimage such as this “whenever they can, whether that is May 1, next May 1, or any other time of the year.”

Fellowship is also an important aspect of pilgrimage. Upon reaching the South Bend destination, participants will have the opportunity to socialize, purchase food prepared by the Knights of Columbus and enjoy live music in a fenced-in area where children can play.

Allen reported that more than 50 people had registered within a few days of the webpage going live, so he’s hoping to see a good turnout of pilgrims.

“It is resonating with people who were aware of the Year of St. Joseph. A lot of people are doing the consecration,” he said.

Father Donald Calloway’s 30-day consecration to St. Joseph – arguably a popular book on the subject – is meant to end on a day dedicated to St. Joseph, so many people are choosing to complete theirs on May 1.

He recommends approaching it in a prayerful, sacrificial manner, trying to focus on the spiritual aspects of the walk; meditating on the ways God touches a person’s heart during the walk and carrying that into daily life.

“It’s not just a secular walk, like when you’re raising money for a cause. It’s about the journey, not just the destination.”