A  group of parishioners from St. John the Evangelist parish, Goshen, joined together this summer to bring a bilingual radio station to the city. Radio Horizonte — La Voz de Goshen was the brainchild of Manuel Cortez of Latinos for Education, who said he wanted a radio signal that would reach young people and promote the importance of higher education.

As he spoke to other parishioners and they came on board, the mission grew to include bridging the gap between the Hispanic/Latino community and everyone else. The group also sees it as an opportunity for evangelization.

Jose Pichinte said, on the day the station went live: “This is not just for Hispanics but for everyone — Caucasian, Black, everyone. We want to break the barriers of communication. We want everyone to see there’s a future here for us. We come to the U.S. with a vision for a better future, and we are willing to work hard.” 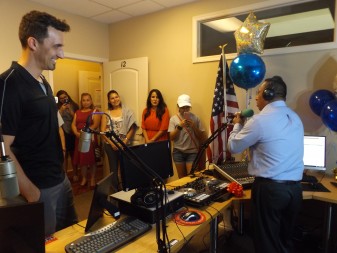 Manuel Cortez, president of Radio Horizonte and Latinos for Education, said “hola” to listeners in Goshen when the station went live for the first time on June 11. Goshen Mayor Jeremy Stutsman, left, looked on, along with other well-wishers and volunteers. The nonprofit station is run by a group of volunteers from St. John the Evangelist Parish who are utilizing the station to promote education, bridge the gap between Spanish and English speaking communities and evangelize.

Giovani Munoz, who is enrolled in the Hispanic diaconate program, said the aim of the radio station is to encourage moral values and advertise social activities and encourage both communities — Spanish-speaking and English-speaking — to attend and learn from each other. At some point the group would like to invite St. John the Evangelist Pastor Tony Steinacker to come in.

Cortez, who’s been involved with adult religious education for the Hispanic ministry for the past six years, said: “When we are involved in the community in different ways, by being a volunteer, we can see what the needs are. We want to use the channel to be a voice for people who don’t have a voice.”

The Spanish speaking community feels the language barrier sometimes makes it hard to open doors to get needed assistance, he added, so they are using the channel for public service announcements and also to ask for help for specific needs. Recently, the station broadcasted that a family man was in need of a job: a day later, he had one.

The radio station is open 24-7. From 8-11 a.m. on weekends, it plays rock n’ roll in both languages, but the volunteers make sure the music they play has good values and does not use bad language. They play at least one Christian reflection each hour. Those involved want to connect with young people through music while also sending a message that they are the future of the community.

Munoz said although the radio station is not 100 percent Catholic, it does promote Catholic values and family values.

“I see the microphone as a great tool. Pope Francis encourages us to live our faith in a different way and to reach all the people where they’re at,” he noted.

He also supports the original intent of promoting education by encouraging involvement in parent-teacher conferences and learning about scholarship opportunities. “It can’t just stay a dream; you have to work to achieve it,” he said.

“We always have to fight for justice and dignity for every human being. We’re using the radio to be that link.” 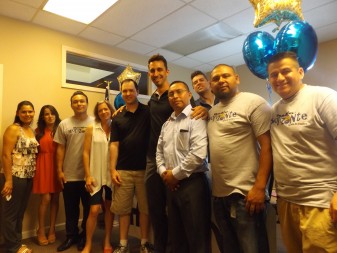 Munoz said some of the programming is in Spanish, some in English and some programming is bilingual. “If we have talented people and can do both, that’s great.” Elijah Durnell, a local musician whose family attends St. John’s, is working on the English music programming.

Nohemi Garcia also volunteers in adult catechesis at St. John’s, and said she likes being involved with the radio station because “it’s an opportunity to share and help others understand about the Catholic Church.”

Being part of the radio station is great for me,” added Alfredo Dominguez, who is part of the parish’s Spanish choir. “It’s fun to see Manny and talk about music.” But he added that music that promotes violence, or is degrading to women, “should not be there.”

It was a lengthy process to get the station on the airwaves. Cortez first applied for a license with the Federal Communications Commission on Sept. 3, 2013, and was granted the license on April 4, 2016. He overcame several obstacles, including nearly losing the FCC license due to lack of financial aid, software issues and antennae problems. But with perseverance in prayer and faith, he and the other volunteers overcame them and went live on June 11.

There are about 16 people involved with the nonprofit endeavor. Cortez said more volunteers are welcome, particularly English-speaking ones; as is any organization that wants to share and offer programming in either English or Spanish. A grant helped get the radio station off the ground and on the air, but donations are appreciated.