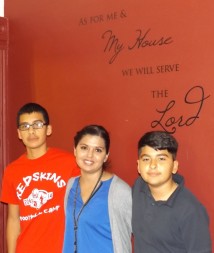 Liz Lopez, center, lives by the motto displayed on the wall behind her. She and her boys Oscar, left, and Ruben, right, spoke in their Goshen home recently about how her disease affects their family and how their faith sustains them.

GOSHEN — It’s not easy for St. John the Evangelist parishioner Elizabeth Lopez to talk about her illness and her need for a kidney donor, but she agreed to speak about it for two reasons — her family, including her two young sons, and others who like her, might need an organ donation to survive and thrive.

A 14-year Goshen resident, Lopez was born and raised in California. She and her husband moved to Goshen after visiting here. “We liked it and thought it would be a good place to raise kids — except for the snow,” the native Californian admitted.

Lopez was diagnosed with Lupus — an auto-immune disease — 11 years ago, shortly after Ruben was born. The diagnosis came after her kidneys began failing. Lopez said she was able to control her illness well for about 10 years with the help from supplements like chanca piedra and tumeric. The day before last Thanksgiving she became ill and was sick throughout the holiday. On Dec. 2 she was admitted to the hospital and her levels were dropping fast. She and her husband, Sandro, were told had they waited another day, this could be a different story.

She’s had six surgeries since then and complications from the surgeries.

Lopez was put on the donor list in September of 2014. She said she’s on the top of the list, but because she has a lot of antibodies in her blood, it’s been hard to find a match. Her blood type is AB positive, which should be easily compatible but multiple blood transfusions have proven it difficult.

Despite health issues, Lopez is still working. She’s employed at Oaklawn, a mental health facility, and said her employer understands the time off that she’s needed. “Working keeps me sane,” she said. She is also taking classes at Ivy Tech in Business Administration and Human Resources.

Lopez said her pastor, Father Anthony Steinacker, and parishioners at St. John have been very supportive. “St. John’s has been so helpful — they’ve brought so many meals and (parents) have taken the kids to school.”

Her faith has definitely helped sustain her. “I believe God doesn’t give me more than I can handle. I believe He helps me or I wouldn’t be here. I believe He has a plan for me,” she said.

One of those plans, she believes, is to be a co-facilitator of a local Lupus support group. She’s contacted the Lupus foundation and applied. She said people need a place to go for support, to vent and to talk with others who can truly relate.

She said her illness has been a strain on her family. “There’s not a day I don’t think about it or want to cry about it and sometimes I do on my way home — but I have to be strong for my kids,” said Lopez, adding that her boys have had to grow up fast. She describes them as shy and caring and always looking out for each other. They also help her out around the house and on bad days, cook while she supervises.

Lopez receives dialysis three days a week for four hours. It drains her but she still goes to work, school and cares for her family.

Dr. Tim Taber, transplant nephrologist at IU Health, Indianapolis, said while dialysis is a good thing, it does shorten a patient’s life expectancy. “The longer a patient is on dialysis their life expectancy is diminished and that’s why a transplant is important,” Dr. Taber said. Dr. Taber said of the 300-400 kidney transplants done at IU Health, 35-40 percent are living donors. “If you give a kidney to someone on the waiting list, that moves someone else up so you’re really helping to get two people transplants,” he said.

She said it would “mean the world” to her to get a kidney and her sons expressed the same. Ruben said he prays a lot about it — “For mom to get a kidney donated so she can feel better.” Oscar said if his mom got a kidney donated she’d have more energy and feel good and we could stop hearing about the kidney stone pain. “I hope one day someone actually goes in to donate.”

Lopez said she also wants to spread the word about the importance of organ donation. “Please think of becoming an organ donor. I know it’s hard to think of giving a kidney — you have a family, too. But please consider it. If not for me, then for someone else,” she implored. “And if not a live donor, then think about when you pass on — you have the ability to save so many lives.”