St. John the Evangelist ‘Mother Church’ of the county 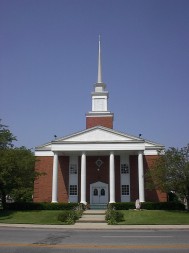 “St. John’s rich history is one of the things that make the parish so special,” said Reverend Anthony Steinacker, pastor of St. John’s.

It’s a vibrant parish with very active English and Spanish speaking communities and there’s barely a time that the church and its facilities are not in use.

In 1840, St. John’s was made a mission church of St. Augustine in Fort Wayne (now the Cathedral of the Immaculate Conception). From 1840-1860 it was served by Holy Cross Fathers Alex Granger and Edward Sorin from Notre Dame and Father Henry Schaefer from Avilla. Masses were celebrated in the old courthouse as well as private homes. In 1860, Father Schaefer organized the 30 families scattered around the county to build the first church.

In 1868 a parochial school opened in the church building where boards were placed over pews to serve as desks. The first school building was built later that year at a cost of $500. In 1881 a second school was built and the Sisters of Holy Cross came to teach. 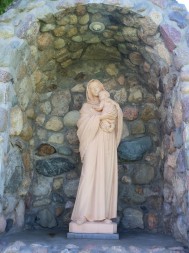 Our Lady of the Streets grotto at the corner of Monroe and Third Streets in Goshen, across from the church and between the convent and rectory.

St. John’s also built St. Henry’s  Catholic Church in Millersburg, which was dedicated by Bishop Dwenger in 1880. There were 40 members attending but as numbers dwindled, the church was sold.

St. John School closed for a number of years following the Depression and re-opened again in 1949.

In 1941, Father Herman Miller started the mission church in Bristol — St. Mary of the Annunciation.

The parish received a boost in membership when Penn Controls opened a plant in Goshen and moved personnel from Des Moines, Iowa — many of whom were Catholic.  In ensuing years, as properties on 3rd and Monroe Streets around the church became available they were purchased. In 1970 the 110 year old church building was demolished and the current church was built, along with a new rectory across the street from the church. The old rectory became the present convent.

The first Mass was celebrated in the new church on Pentecost Sunday, May 17, 1970.  In 1978, St. John’s became a twin sister parish with Our Lady of Guadalupe in Milford.

St. John’s has over 75 ministry groups in English and Spanish.  The Hispanic Ministry began at in 1996 under the direction of Father Ed Krason and Father Paul Beuter. The first Spanish Mass was celebrated in 1997. The original 33 members of Hispanic background have grown to 700 or more — about half of registered households at St. John now are of Hispanic descent.

Efforts to unite the two communities have been ongoing with lack of enough space being one barrier. The Christ Renews His Parish program, a mission from St. Vincent Parish, began in 2010 and the program  has been instrumental in building relationships between the two communities in faith sharing and fellowship. Joining the two youth groups into one has also been a unifying factor.

Father Tony said, “It’s beautiful that now the second and third generations don’t see race or color, they just see Christ in one another.”

The youth ministry was started in 1991 but has been really strong and growing since 2003. The music ministry at St. John’s has also always been strong and in the early 1960’s under the direction of Rose Marie “Rody” Weaver brought fame to the parish as the “St. John’s Singers” performed on the road and even produced two records. A “Little Singers” group joined their musical parents  and several of those “Little Singers” are still actively involved in music ministries in their parishes.

The parish library began as a result of the last parish survey in 2002 and the parish is currently conducting another.  There have been many Bible studies and small groups over the years which continue today. Adult education classes are held on Sunday mornings after 8 a.m. Mass and while children are in CCD classes.

The Knights of Columbus Council 7541 was chartered in 1980 and became active in 1982. The Lenten Fish Fry has been touted by many in the community as the “best fish fry in town.”

Embracing Parenthood is a fairly new program started because of the growing number of young families at St. John’s and is a way for them to come together, learn, share a meal, their faith and parenting concerns.  The Young Adult group meets with other young adults in the county.

St. John’s parishioner Vince Traxler had a mission to bring attention to all the aborted babies since Roe v Wade. As a skilled woodworker and metal craftsman, he began the White Cross Project . Over the last 20 years over 150 crosses have been erected all over the state and in Wisconsin, Illinois, Michigan and Ohio and are erected in church yards and cemeteries of Episcopalian, Methodist, Catholic and Missionary Churches.

On Oct. 27, 1996 Our Lady of the Streets grotto was dedicated. Parishioners who strongly support the right to life came up with the idea and raised funds to bring the grotto to the corner of Third and Madison streets.

The Pieta on the south lawn was dedicated in September, 2008, bequeathed to the parish from the estate of a parishioner in the memory of her son and husband.

Father Steinacker said another notable part of St. John’s history is the fact that what is now The Center for Healing and Hope began at as the St. John Clinic under Deacon Ricardo Medina’s direction in 1999.

In 2014 the 175th anniversary revitalization campaign began to beautify the interior of the church. The first all parish outdoor Mass and picnic was held in August 2014 and several special events were planned throughout the  2014-2015 year. An updated history was compiled and a new cookbook was commissioned. The anniversary Mass was celebrated with Bishop Kevin C. Rhoades on  June 7, 2015.

Future improvements will soon be made to the porch and sidewalks as a result of preliminary returns of the parish survey. He said the new porches and sidewalks will have heating elements so that ice won’t collect, making them safer.

Father Steinacker said he hopes the members of the parish family will continue to grow in faith with one another.