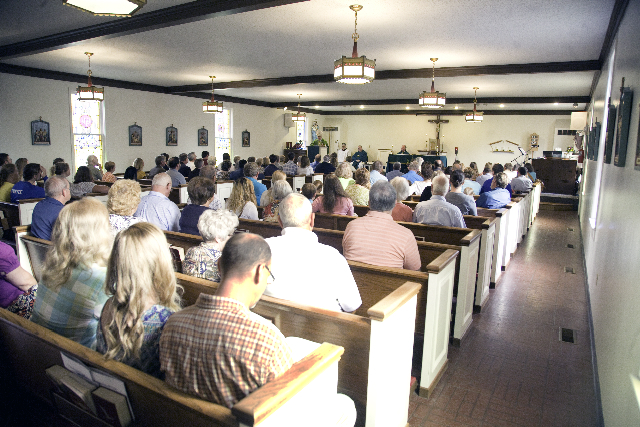 PIERCETON — The members of St. Francis Xavier Parish in Pierceton are unanimous in their love for and praise of the small Catholic community and nearly all are active in church life and events.

“The great thing about a smaller church is that you get to know people … you feel more like family,” Sexton said. As a person who likes to be involved, he headed up the RCIA program last year and now serves on the parish council. “I’m always there,” he said, if Father Chuck Herman needs something done.

Father Herman himself is still getting acquainted since his appointment to the position of St. Francis Xavier pastor by Bishop Kevin C. Rhoades just last month. As a newcomer, his initial impression of the parish is similar to Sexton’s. He’s found “a very active, very welcoming community with a lot of enthusiasm. They like to get things done.” The parish population is about 150 families with members of varying ages. “We have ‘em all,” he said. And there are ministries for everyone. 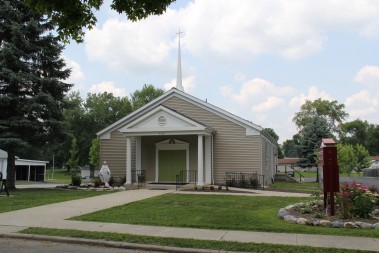 The present church as it stands today.

Men of the parish may join the fledgling Knights of Columbus chapter. Only one year old and not yet chartered, the 12-member organization or “round table” helps around the church, works at the church cemetery and assists elderly in the community. Plans for the future, according to Fourth Degree Knight Don Ripplinger, include a parish breakfast and father-daughter dance.

The music ministry at St. Francis is headed up by Georgia Tenney, who has been organist there the past 10 years. She plays for the Saturday evening Mass, while guitarists Betsy Hoffman and Susan Eberhardt cantor and play at Sunday morning Masses, including the popular 7:30 a.m. Mass at nearby Jellystone Campground, which Father Herman has re-instituted after a long hiatus. Substitute organist and cantor Ann Zydec assists Tenney and will step in during the winter months. Though there’s no church choir at present, Tenney confides that Father Herman wants one, so there’s a plan underway to begin recruiting singers at Christmas time.

St. Francis Xavier is active in the broader community as well and participates in a three-church free dinner ministry with the local Methodist and Presbyterian churches. Each congregation takes its turn planning the weekly menu, preparing and serving the food. Seventy-nine people from the area attended the most recent dinner, said Tenney. 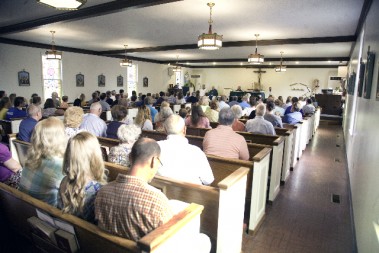 Bishop Kevin C. Rhoades spoke of evangelization during his homily at the 150th anniversary Mass on Aug. 17. He said, “After 150 years of faith, may that faith continue to shine through your witness of love in this community.”

Ministries serve parishioners both young and old. Children’s religious education classes are held each Sunday morning after the 9 a.m. Mass. Sharon DeLong oversees the program, which serves preschool through eighth-grade, while Don Ripplinger teaches Confirmation classes. DeLong says the number of children in the program increases yearly. She, too, enjoys the “small community” atmosphere of the parish.

Shut-ins and the elderly are served as well. Lay ministers take the Holy Eucharist to them on a weekly basis and Father Herman visits them monthly.

A new Parish Life committee will begin in the fall to plan activities, which promote the sense of community that parishioners seem to enjoy. Tracy Ripplinger revealed plans for the second annual parish Octoberfest, which is slated for Saturday, Oct. 25. A six-piece polka band will play for dancing and entertainment, a photo booth will be on site, German food will be served, and a German dessert contest will be judged by the pastor, she said. It is expected that with deep German roots himself and fluency in the language, Father Herman should feel very comfortable during the festivities.

Planning such events might be daunting but the advantage of belonging to a family-oriented parish, said Ripplinger, is that people simply ask, “What can I bring? What can I do?” so that things run smoothly and easily.

She is especially proud of the church’s first place award in this year’s Pierceton Days Parade. The parade theme was “Saturday Night Fever” and St. Francis Xavier’s entry entitled “Staying Alive for 150 Years in Christ” exemplified both their parish longevity and their community spirit. As usual, many parishioners helped with the project. These are the kinds of things “that bring people together,” she added.

At the time of the 100th anniversary celebration in 1964, then-Bishop Leo A. Pursley wrote of “the spirit of the Catholics of Pierceton who, despite being a mission for so long without a resident pastor, kept alive their love for their parish church and their pride in serving it.”

Former parish administrator Father Robert Schulte observed at the time of the 125th anniversary celebration in 1989, “I remember St. Francis Xavier as a remarkable small parish where most people know one another and support one another in times of need. The ladies of the parish had been especially ready to help whenever needed.”

That welcoming attitude continues and the small faith community of St. Francis Xavier, Pierceton, now pastored by Father Chuck Herman, continues to thrive and appears more than ready to carry on the spiritual mission established 150 years ago by its Catholic predecessors.