He attributes some of his personal growth to the SportsLeader program started this fall at Bishop Dwenger.

“It helped me become a better leader,” said Schreck, who also plays baseball for the Saints.

SportsLeader has been in use for more than two years at Bishop Luers High School in Fort Wayne. The program also has been adopted by St. Vincent de Paul and St. Louis Academy elementary and secondary schools in the Fort Wayne area. Saint Joseph High School in South Bend and Marian High School in Mishawaka also are considering using it.

Driven by the motto “Virtue equals Strength,” SportsLeader uses sports as a tool to evangelize, build students’ Catholic identity and help them get to heaven, national director Lou Judd said during a telephone interview.

“There is nothing else at any school that has the reach of sports, outside of the classroom,” said Judd, who lives in Park Hills, Kentucky.

Many student leaders at schools also are athletes, he added. “If they love God, it influences their peers.” 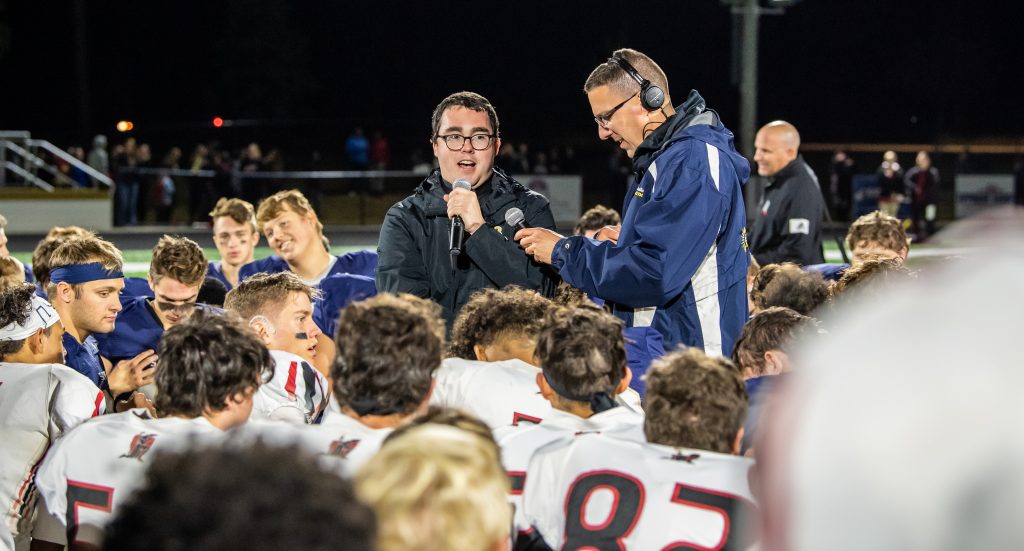 John Martin
Nick Gray of Redeemer Radio holds the microphone as Father David Huneck, co-chaplain of Bishop Dwenger High School, Fort Wayne, prays with Dwenger and crosstown rival Bishop Luers High School football players before a game this fall. Developing leaders who are confident in their faith is the goal of the SportsLeader program utilized at both schools.

Athletes on all Bishop Dwenger sports teams, the cheerleaders and members of the Pom Squad dance group participate in the program, said Chris Svarczkopf, an assistant principal who serves as dean of freshmen and director of the New Saints and SportsLeader programs. About 40% of Bishop Dwenger’s more than 1,000 students participate in sports.

Each week, SportsLeader provides schools with a character virtue to work on with students. Those virtues include traits such as charity, humility, courage, respect, sacrifice, perseverance and accountability.

Morning announcements mention the virtue of the week, Svarczkopf said. Coaches then take time during practices or pre-game to work with their teams on the virtue through discussions, Scripture readings, attending a team Mass, video clips or other activities, Svarczkopf said. SportsLeader also recommends asking opposing teams to join together in prayer before or after the game.

“The goal is we get our student athletes to heaven,” noted Svarczkopf. However, building students’ character also can lead to better team results.

All 16 sports the school offers use SportsLeader, and that affects about 350 athletes each year. Some students try a sport and don’t continue it for all four years, Godfroy said, so over time the program probably reaches about 75% of the approximately 510 students at the school.

Along with starting the SportsLeader program this fall, Bishop Dwenger also rolled out a similar virtues program, New Saints, for all freshmen and students of any grade who are new to the school. Svarczkopf said the program grew out of a school strategic plan survey from a few years ago, which found concerns about an increased lack of respect, accountability and responsibility among students.

Starting school at Bishop Dwenger can be a big adjustment for many students, Svarczkopf explained. The school offers a rigorous, college-preparatory academic program. Students may also encounter more rules than they had previously, such as a dress code.

Bishop Dwenger uses the SportsLeader virtue of the week as the weekly virtue for the New Saints program. Every other week, New Saints students also attend a special character development lesson. More than 100 upperclass peer mentors, such as Schreck, also work with New Saints students in small groups for about 10-15 minutes once a week during lunch period.

“We are trying to instill the virtues in them so they mature and, when they are seniors, they become good leaders of the school,” said Schreck.

Students in the New Saints program and their peer mentors also complete a community service project.

“Service is the way to actually live your faith,” noted Svarczkopf.

They now are collecting items for Christmas gift boxes that will be given to the 100 residents of a nursing home in New Haven.

Bishop Dwenger administrators hope the character traits and values instilled through the SportsLeader and New Saints programs will give students the strength to get through difficult situations they may face in life, said Svarczkopf.

So far, feedback from students and coaches has been positive.

“I can sense a difference in the building — a more positive attitude among students as far as caring about others,” he said.