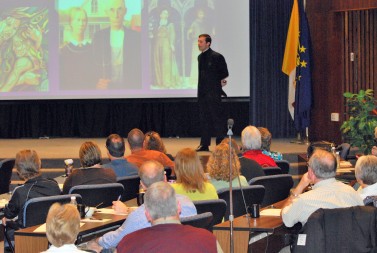 Father Bob Lengerich was one of the speakers at the Marriage and Family Conference at the University of Notre Dame campus on March 24.

NOTRE DAME — Franciscan Father David Mary Engo explained to the audience at the Notre Dame Conference Center that marriage is not a 50-50 proposition. “God provides the beautiful holy sacrament of Matrimony so that we will have a place where one can love 100 percent, be received 100 percent, and receive the other person 100 percent.”

Father Engo was among the speakers at the second Marriage and Family Conference held at the Notre Dame Conference Center on March 24. Sponsored by the diocesan Office of Family Life, the conference included Morning Prayer, two plenary sessions and three workshop sessions of four topics each to choose for those attending.

Bishop Kevin C. Rhoades quoted a pastoral letter written by the U.S. Conference of Catholic Bishops two years ago about the importance of the sacrament of Marriage. “There is no greater love within a marriage and a family than for the spouses and children to lay down their lives for one another. This is the heart of the vocation of marriage, the heart of the call to become holy,” Bishop Rhoades explained.

He spoke about the need for growing virtue in marriage. “True happiness is a virtuous happiness, a blessed happiness,” Bishop Rhoades said. “Holiness, living in friendship with Christ, living with faith, hope and love, is what brings true happiness.”

“It involves an increasingly Christ-like love for one’s spouse and one’s children,” Bishop Rhoades continued. “And a love for God above all else since He is the ultimate source of happiness in this life and in the life to come!”

In the first of the conference’s two plenary sessions, Father Bob Lengerich, pastor of St. Dominic Church in Bremen, spoke on the topic, “What the Theology of the Body Means for Marriage.” Father Lengerich noted that in any vocation a person chooses that there will be suffering.

“The good news of Christianity is suffering is not meaningless,” Father Lengerich stressed. He offered a moment of levity on the subject of suffering when he spoke of the four rings of marriage; an engagement ring, two wedding bands, and a “suffer ring,” which drew laughter from the audience.

Father Lengerich emphasized that the moment to embrace marriage begins now. “You reap eternal life not just at the end of time but the Resurrection starts now because Jesus is alive and He wants us now to experience the glory that is in store for us in heaven.

“In the Song of Songs it says ‘Love is stronger than death.’ God is teaching us that if we want to become a father it will demand everything you have to give,” Father Lengerich added.

Father Lengerich noted the circular shape of the wedding ring also has added significance in the sacrament of Marriage. “A ring is round to remind us that love is forever. It has no beginning, it has no end. It is a participation in God’s well being because God is love and like the Song of Song says love is like the fire of God Himself.”

In the second plenary session, Father Engo, superior of the Franciscan Brothers Minor in Fort Wayne presented “The Mission of the Christian Family,” which spoke of marriage reflecting the interior life of the Trinity itself.

“Love is 100 percent self gift. You can’t hold back anything of yourself or for yourself,” said Father Engo.

The need to protect the family is crucial in the current culture, Father Engo stressed. In addition to the roles of parents, grandparents also serve to influence children in their spiritual lives.

“Nobody really understands the power of grandparents. Kids will listen to grandparents, but maybe not their own parents,” said Father Engo. “It is important as grandparents to take your grandchildren aside and to begin to really educate them in the faith. You teach them to pray, you take them to church, you show them the ways of God. Let them see in you living images of God.”

Father Engo also touched on the impact of suffering in marriage and the family. “One of the most awesome things about being Catholic is that we understand the power of suffering. We understand its dignity. The beautiful gift of suffering is that we enter into it with joy knowing that we are hanging on the cross with our Lord Jesus Christ,” he said.

Suzy Younger, a parishioner of St. Pius X, spoke at one of the morning workshop sessions entitled “Dealing with Infertility.” Younger shared with those in attendance her and husband Dave’s journey through infertility for the past four years.

Younger explained that statistics show that one in six couples struggle with infertility. The grief that accompanies infertility usually follows five stages that include denial and isolation, anger, bargaining, depression and acceptance.

Biblical Scripture also helped Younger deal with depression. “Hannah and Elkanah in First Samuel taught me it was all right to cry. I think that tears are very holy. They are tears of surrender and abandonment to God saying I need you,” she said.

“Hannah learns when it becomes too hard to stand in the Lord’s presence and she kneels. The hours I spent before the tabernacle and the Blessed Sacrament showed me He is the author of life, He is the giver of strength, the provider of grace, the sustainer of hope and the Prince of Peace,” she emphasized.