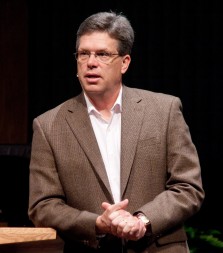 Scott Klusendorf is the founder and president of Life Training Institute, which was established in 2004 to challenge and equip pro-life advocates to persuasively defend their views in the public square. He was the keynote speaker at the annual “Life is Precious” dinner in South Bend on Oct. 30, where he gave a talk on how pro-life supporters can effectively advocate for the cause of life in today’s culture.

SOUTH BEND — Scott Klusendorf, founder and president of Life Training Institute, was the keynote speaker for the “Life is Precious” dinner hosted by the St. Joseph County Right to Life (SJCRTL) on Oct. 30.

Bishop Kevin C. Rhoades offered the invocation and opening remarks for the event held at the Century Center in South Bend, which attracted 725 attendees.

In his remarks, Bishop Rhoades praised the work of SJCRTL for its efforts to protect the unborn through prayer, education, political activity, social action and service.

“Respect for life is the foundation of a truly just society,” Bishop Rhoades said. In light of the upcoming election, he also urged the audience to “vote for candidates who will further the common good, remembering that it is impossible to further the common good without acknowledging and defending the right to life.”

Scott Klusendorf began his talk with the assertion that all supporters of the pro-life cause must also be apologists for the cause. This is due to the fact, Klusendorf said, that the pro-life movement faces an “increasingly hostile culture” that eschews absolute moral truth.

He said that in order to effectively engage the culture on the issue of abortion, pro-lifers need clarity on three questions: What is the unborn? What makes us valuable as human beings? And what is our duty?

Klusendorf argued that the first question, in particular, needed to come back to the forefront of the debate. “This is an empirical question that deserves an empirical answer,” he said.

“From the earliest stages of development, you were a distinct, living and whole human being.”

Quoting Pope Benedict XVI, who said that in the 21st century the faithful live under a “dictatorship of relativism,” he argued that while the issue of abortion may arouse complex emotional reactions, it is not for that reason exempt from a definitive moral analysis.

Klusendorf showed a brief video clip that included images of aborted babies. While the images were disturbing, he believes they play an important role in sensitizing the public to the reality of abortion.

“If the pro-life movement does not lovingly but truthfully open the casket on abortion, our nation is going to continue to tolerate an injustice it never has to see,” he said. “But when we open that casket, we offer the hope of reconciliation to God through Jesus Christ.”

In regard to the second question that needs clarity, Klusendorf spoke of the value of every human being as created in the image of God, regardless of size, level of development, environment or degree of dependency.

To close, Klusendorf addressed the third question. “What is our duty? To love our unborn neighbor and his mother. And love is costly.”

Tom Gill, president of the St. Joseph County Right to Life board, called attention to the cards placed at the seat of each attendee with a date representing a real abortion that took place at the abortion facility in South Bend. He encouraged attendees to name the baby memorialized by the card and to pray for that baby throughout the coming year.

Gill spoke of the importance of the St. Joseph County Right to Life’s billboard campaign, sidewalk counselors and prayer witness, all of which helped redirect 245 women from the abortion clinic to the Women’s Care Center in 2013.

“Every year all of us as a pro-life community are saving more babies,” he said.

Program director Jeanette Burdell thanked the volunteers who have been invaluable to the work of St. Joseph County Right to Life. She also acknowledged the work of new operations manager, John Fyrqvist, whose IT background, she said, has helped take the organization’s work to the next level.

Together with Gill, Burdell presented Holy Cross Brother William A. Mewes with the Annette M. Macknick Courage Award for his work as a pro-life educator, prayer witness, sidewalk outreach coordinator and demonstration participant.

Michael and Colleen Kendzicky were the recipients of the Pillar of Life Award for their generosity and leadership, which has had “a notable impact on our mission to save lives.”

The Brother John Lavelle, CSC, scholarship was awarded to Michelle Roy, a junior at Holy Cross College, for promoting and serving the pro-life cause as both a high school and college student.