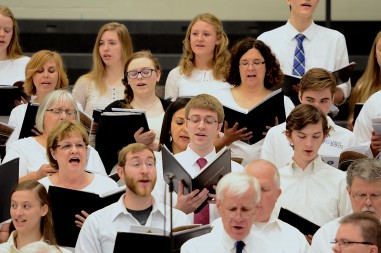 The diocesan choir, comprised of members of Michiana parishes, provided the sacred music for the 150th Anniversary Mass of the City of South Bend.

SOUTH BEND — The faith-filled 150-year history of South Bend was celebrated at a Mass May 31 at Saint Joseph High School. Originally planned as an outdoor Mass at Father Bly Field at Legihton Stadium, inclement weather relocated the faithful indoors to the Saint Joseph High School gym. Bishop Kevin C. Rhoades celebrated the Mass for the 150th Anniversary of the City of South Bend.

Saint Joseph Hospital was erected by the Sisters of the Holy Cross in 1882 on the current site of Saint Joseph High School. Although South Bend was already 17 years old, the hospital was the first institution in the city to care for the sick. It was directed by Civil War veteran Sister Mary Edward and staffed by other Sisters of the Holy Cross, lay nurses and five volunteer physicians.

Today, it is not uncommon for Saint Joseph High School students — and even their parents and grandparents — to have been born on the hospital property where they now attend high school.

The Saint Joseph High School property, being the former site of Saint Joseph Hospital, was also the location of Notre Dame football legend George Gipp’s famous purported deathbed speech where he told Knute Rockne to tell a future team to “Go out there and win one for the Gipper!”

Michiana parishes provided the talent for a diocesan strings, woodwinds and brass orchestra for the Mass and prelude. And a diocesan choir provided the sacred music for the Mass, all directed by Jeremy Hoy, music director at St. Pius X Parish, Granger. 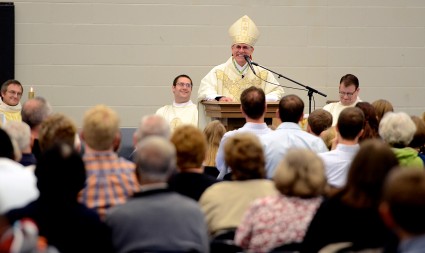 Bishop Rhoades’ homily incorporated the day’s feast, the Solemnity of the Most Holy Trinity, and then captured the history of the Catholic faith in South Bend.

He spoke of the earliest French missionary priests who celebrated the first Masses in the area in the late 1600s. And French Jesuits brought the faith to the native Potawatomis.

“Today’s celebration would not be complete without our remembrance of the first native Catholics of this region, the Potawatomis,” the bishop said.

The bishop also traced the history of Father Edward Sorin, and the six religious brothers of the Congregation of Holy Cross to the community.

“With the arrival of Father Sorin and the Holy Cross brothers in 1842, a new era in the history of Catholic life in this region began,” Bishop Rhoades said. “They began the school that became the University of Notre Dame. Father Sorin and later, a succession of Holy Cross priests, brothers and sisters ministered to the Catholics living in this area and beyond.”

The diocese was established in 1857 and encompassed the entire northern portion of Indiana. 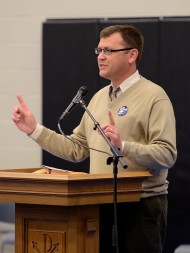 Robert Kloska served as chair of the Mass Committee and organized the 150th Anniversary Mass of the City of South Bend at Saint Joseph High School on May 31.

The Catholics in the area worshiped at Sacred Heart at Notre Dame until 1853 when Father Sorin and Holy Cross priests bought the land and built a chapel in 1853 on the northeast corner of what is today Hill and LaSalle streets. It was named St. Alexis Chapel, in honor of the patron saint of South Bend’s founder, Alexis Coquillard.

“This became St. Joseph Parish, the oldest Catholic parish of South Bend,” Bishop Rhoades said, “though some debate this, since at that time, this property was part of Lowell, a town that was only annexed to South Bend in 1867. We can say, however, that it is the oldest parish in present-day South Bend.”

The Catholic population grew as Irish, German, and later more numerous Polish, Hungarian, Italian and Belgian immigrants moved into the community. In 1927, a specific ministry to South Bend’s 50 African-American Catholic families began and became St. Augustine Parish in 1941. And since the 1950s, South Bend has been home to a growing Hispanic community.

“We see a beautiful, rich tapestry of ethnic Catholic communities throughout South Bend’s history, a unity in diversity that is still evident today,” Bishop Rhoades said.

Bishop Rhoades said, “Bishop Leo Pursley asked for this change to honor South Bend and its religious heritage. With this re-naming of the diocese, St. Matthew Church was promoted to the rank of the diocese’s co-cathedral.”

“Today it is good to give thanks to the Most Holy Trinity for the rich heritage of faith here in South Bend, to remember our ancestors in the faith, and to be resolved to continue their beautiful legacy in the present and future,” Bishop Rhoades said. “We pray for the city of South Bend during this 150th anniversary year, for all our brothers and sisters of different faiths. Together we are called to work together for the good of this city, especially mindful of those who are in need or struggling to make a living. We pray for the peace and prosperity of this city.”