Southwest of Fort Wayne, just 3 miles from the Ohio state line, exists the small community of Monroeville. Like many smaller churches across the diocese, the Catholic parish of St. Rose, located in the town, plays a large part in the development of the local Catholic faith and community.

The church is named St. Rose de Lima, after the first saint born in the Western Hemisphere. In 1868, Father E. P. Walters erected a small church for 20 families, which stood for 19 years. In 1882, during Father B. Hartman’s administration, a residence was built and cemetery was secured. Father J. Grogan was appointed the first resident pastor in 1884.

A church bell and Stations of the Cross were all that were saved from a fire that destroyed the church in October 1887. A fund of $4,500 was quickly raised to replace the church: Much of the money was donated by the non-Catholic community. A cornerstone for the new church was laid by Bishop Joseph Dwenger in July 1888, and on May 12, 1889, the new church was dedicated.

The city of Monroeville acquired the ability to generate electricity in 1904, and the church was wired to receive it. A steam heating and boiler room was built, and a new rectory as well. In the fall of 1912 a school opened, and teaching nuns from the School Sisters of St. Francis in Milwaukee came to live in its east wing and instruct the students. The sisters served the school from 1912 to 1972. 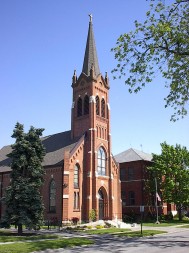 Father C.W. Marr succeeded Father Felden in June 1922. Father Marr oversaw numerous improvements to the church and school, including a home deeded by Dr. William Conolly to the church, which became a home for the nuns.

Under the administration of Father Theodore Fettig in 1931, a commercial building was moved and the ground turned into a play area for the school children. Father Fettig was instrumental in reducing the parish debt and erecting a new rectory, complete with furnishings and landscaping. Church improvements were also made.

The late 1960s and 1970s saw four pastors serve the parish. First was Father C. Ueber, from 1964-69. During his tenure, St. Rose was the first church in the diocese to turn the altar around and have the priest face the congregation, in accordance with the reforms of Vatican II. Father Paul Miller served the parish from 1970-72, followed by Father Richard Urbine from 1972-78. On July 6, 1978, Father Paul Miller became pastor to St. Rose’s 228 families.

The first century of the present church was celebrated in 1988. It featured activities including an open house, parish picnic, a homecoming anniversary Mass celebrated by Bishop John D’Arcy on Sept. 11, a dinner and an open reception. A festival that took place during the anniversary year raised nearly $13,000 for the parish. 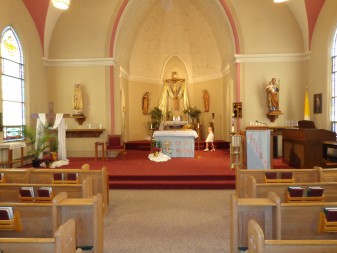 Many parishioners of St. Rose of Lima Parish carry on the faith of their forefathers, who built the faith community’s first church in Monroeville in 1868 under the direction of Father E.P. Walters.

Since 1972 the school has been administrated by laypersons. Dennis Fletter was the first lay principal: He was succeeded by Michael Casper. Carolyn Kirkendall followed, and served as principal for 27 years. Principal Stanley Liponoga IV came to the school in July 2012. Current St. Rose of Lima school principal is Gale Powelson.

In 1998 a kindergarten class was added to the school, and a cafeteria that served hot lunches opened in 2009. The pre-kindergarten through eighth-grade classes at the school currently serve 118 students.

Today the pastor of St. Rose of Lima Church is Father Lourdino Fernandes, and longtime parishioner Annette May serves as the church secretary. Parish membership consists of 240 families and 608 individuals.

Father “Dino” acknowledges the selfless contributions of time and talent to the parish given by school and parish staff members and the many volunteers who maintain both the physical facilities and the spiritual life of the parish.

“St. Rose Church takes care of us from cradle to grave,” said May. “Father Dino has worked to infuse the parish with enthusiasm and love that feeds our spirit. We are a longstanding, vibrant parish.”

She reflects often, she said, on the rich lineages represented at St. Rose. “I often see many generations of a family and can’t help but note the uncles, cousins and cousins’ children around me. I know my grandmother is smiling from heaven when she sees her family still rooted in this church.”

Father Dino is likewise very positive about his role, the past, and the future of St. Rose.

“I am impressed with the great faith (parishioners) have inherited from their forefathers, and continuing this tradition that we have inherited is what I would like most,” he said. Concretely, among his hopes for the future are active involvement in faith-enhancement activities, the giving of witness to the Catholic faith by taking it out into the world, and the building a community of faith to which others will feel drawn because of the welcome they receive at St. Rose. He also has hope that the sesquicentennial celebrations of St. Rose of Lima Parish might accomplish the “outrageous” dream of building a community hall that would enable the members to hold fellowship with each other after Mass and serve as a suitable venue to hold social and cultural gatherings.