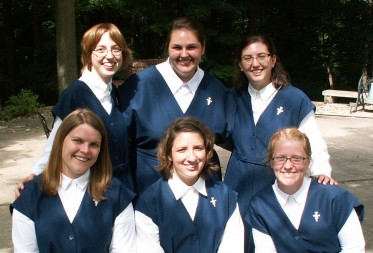 Pictured in this group photo are from left in front, Anna Hoefer, Kimberly Davis, Janet Hilger, and back row, Celeste Warrell, Rachel Worden and Sylvia Pultorak.

MISHAWAKA — The Sisters of St. Francis of Perpetual Adoration in Mishawaka received six new postulants in September: Sylvia Pultorak, Kimberly Davis, Celeste Warrell, Rachel Worden, Janet Hilger and Anna Hoefer. This entrance of the largest class in 38 years has occurred during the year of the sisters’ 150th jubilee celebration of the congregation’s founding.

Sylvia Pultorak comes from St. Paul the Apostle Parish in Joliet, Ill., of the Diocese of Joliet-in-Illinois. She first heard the call to religious life as she was reading “The Lamb’s Supper” by Dr. Scott Hahn, and was inspired by Our Lord’s Eucharistic presence. Pultorak first met the Sisters at Franciscan University of Steubenville in Ohio where she was studying catechetics, theology and French.

Kimberly Davis is a member of St. Therese Parish in Fort Wayne, in the Diocese of Fort Wayne-South Bend. Before she entered, she was a tropical plant technician. Davis’ first interaction with the sisters was at a discernment group in high school with one of the sisters. Later, it was during a discernment retreat at the motherhouse in Mishawaka that she heard the Lord’s call to enter the community.

Celeste Warrell is a member of St. John the Baptist Parish in South Bend, in the Diocese of Fort Wayne-South Bend. She first met the sisters when she was on a high school retreat as a junior in high school. As she was going through discernment, Warrell obtained her bachelor’s degree in biochemistry from Indiana University-South Bend, and continued her education, completing her master’s degree in biochemistry and molecular biology from Michigan State University. While in school to pursue her doctoral degree, Warrell says, “I had a hole in my heart that only Jesus could fill,” so she reinitiated contact with the sisters and requested application.

Rachel Worden comes from St. John the Evangelist Parish in the Archdiocese of Indianapolis. She first considered religious life when she was at a FOCUS conference during a session of Adoration and heard “a shadow of a whisper in my heart.” She met the sisters at a ‘nun run,’ and after her time at the motherhouse, she knew in her heart that she did not want to go anywhere else. Worden advises, “Be not afraid. The One that created your heart knows how to fulfill its desires.”

Janet Hilger is a member of Queen of Angels Parish in Fort Wayne, in the Diocese of Fort Wayne-South Bend. She attended Indiana University-Purdue University in Fort Wayne where she completed her undergraduate degree in general studies. While there she was encouraged in her discernment through involvement with the Newman Catholic Fellowship. When she heard the call to the religious life, a priest referred her to the Sisters of St. Francis of Perpetual Adoration whom she contacted. It was after a discernment retreat at the motherhouse in Mishawaka, she requested entrance into the community.

Anna Hoefer comes from Our Lady of Mount Carmel Parish in Carmel, in the Diocese of Lafayette-in-Indiana. Before she entered, Hoefer was working for an accounting firm. She first heard the call to the religious life when she was having a difficult time with a section for her CPA exam and turned to her faith. She began to attend daily Mass and grew closer to Our Eucharistic Lord. Hoefer knew the sisters since a few of them attended her parish. She was drawn to the community because of the joy of the sisters and their charism of Perpetual Adoration. “God is never outdone in generosity.”