While other teenage girls focus on enjoying their high school experience, Charis, Kenady and Cayley Hall are spending their formative years pursuing grand plans. The three sisters, ages 17, 15 and 12 respectively, possess a variety of talents that they have already put to use for the good of the world around them. Giving of themselves is ingrained in the three siblings. 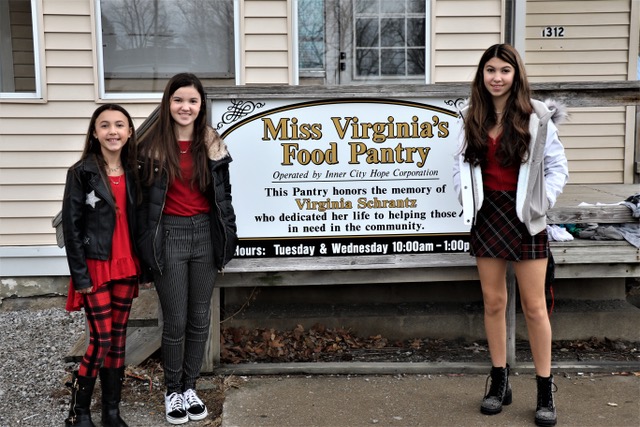 Photos provided by Michael Floyd
Sisters Cayley, Kenady and Charis Hall are pursuing their dreams and living their Catholic faith in some selfless ways, including volunteering at Miss Virginia’s Food Pantry and the St. Mary’s Soup Kitchen in Fort Wayne. 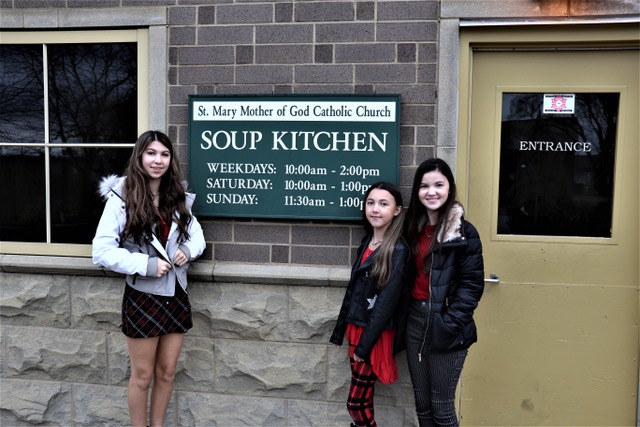 The girls volunteer at Miss Virginia’s Food Pantry and the soup kitchen at their home parish of St. Mary, Mother of God in Fort Wayne. They have also been involved in their grandfather’s production company, Windsong Pictures, from an early age, marching in parades as well as being featured in videos. But their drive to impact their community stems from their unique gifts and how they use their skills to give back.

Each of the girls is wildly talented in her own way. Charis, the oldest, loves physics and calculus, and is very advanced for her years. From the age of four, she knew that she wanted to be an astrophysicist. Toward that end, she completed a NASA internship this summer — the first person from Fort Wayne selected for such an honor. She participated in a virtual NASA challenge, working with science enthusiasts from all over the world, and made it to the finals. She is currently waiting to hear the results. Even before she graduated high school, she had won 11 NASA awards. 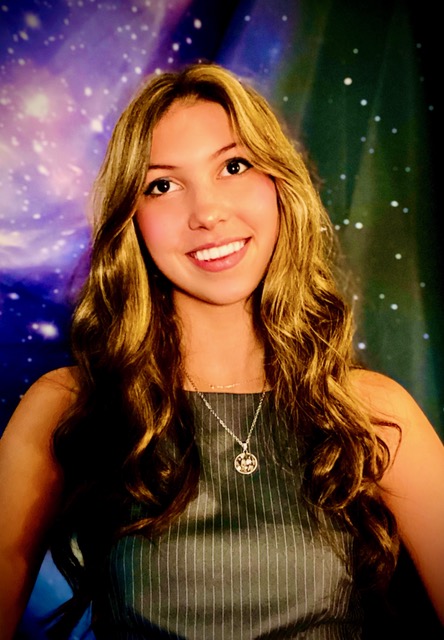 “When I heard about the field of astrophysics, I was fascinated by that; it was something I wanted to do in the future. But it also made me research and learn about other fields in science and beyond, so I think having a good thirst for knowledge has allowed us to research more and learn more.”

This thirst for learning has showed her what she calls the “crucial” nature of helping others. She has created STEM videos and is in the development phase of her own blog or channel to post educational videos. At a designated time of day, she tutors Kenady in math.

At 15, Kenady loves to bake and runs a business out of her home called Angel Cakery, which makes special-order cakes along with other delectable sweets that are sold locally. “I love it when I get an order for a birthday or something and a kid wants something crazy you’ve never heard of,” she remarked. For her, the creation of creations is all about putting a smile on someone’s face.

She remembers helping her mom in the kitchen all her life, but she came into her own around age 8. “And then when our dad got sick, it was something that I dove into to just kind of bring some more joy back into our house … to lift our spirits during such a hard time.”

Big things were in store for Kenady this year. Disney contacted her in February, after viewing a video she had made a couple years ago for a national baking contest. She was chosen to participate in the Disney Magic Bake-Off television show. In the spring, she and Cayley competed in the show together in Burbank, California.

Even under the spotlights, Kenady used her platform for good. The baking contestants were also asked to create the character of a modern-day princess, so the sisters combined their convictions with their heritage, creating a character named Clarity who hails from Jamaica – their grandmother’s homeland. “Clarity,” they said, is a princess who “protects the earth and heals it,” tying in the Hall sisters’ care for creation. 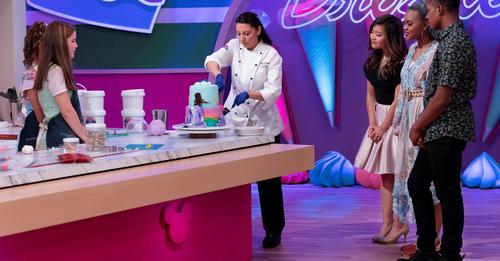 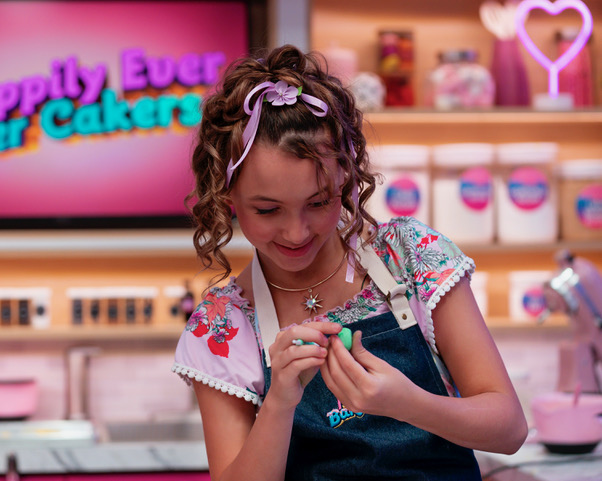 Kenady’s three-tiered layer cake incorporated elements such as lime and pineapple to represent the island nation. She won the contest, adding the “Cakeness of Greatness” trophy to the girls’ impressive collection of awards.

As the youngest, Cayley’s interests run to animals. For her confirmation, Cayley chose the name Francis, the saint known for his love of animals and for being the patron of ecologists. She stated, “I’ve always been fascinated by understanding animals. I’ve always been very passionate towards animals and the environment and helping people understand how important it is for future generations.”

She is a part of “Roots and Shoots,” a program of the Jane Goodall Institute that empowers youths to find ways to impact their communities. She was privileged to meet her heroine two years ago at a fundraising event in Chicago and presented Goodall with a handmade angel doll holding a chimpanzee.

“We recently got a mini-grant from them, so we’re going to begin finishing up a project on pollinators that we did last summer; spreading awareness of the need to protect pollinators and help them,” Cayley said.

The sisters’ complementary interests merge into a cohesive whole when they unite on projects, which is often. “We have our individual focuses, but the one thing I think that ties it all together is being aware and trying to make a difference, because that’s something that we want to do for now but also incorporates into our future careers as well,” Charis explained. 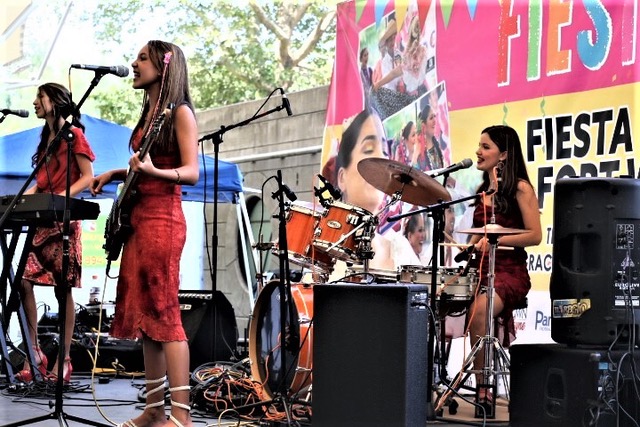 The sisters also perform together in their band, Angel project; Charis plays keyboard, Cayley is on bass, and Kenady is on drums. They have written many of their own songs and sing at weddings and local charity events.

One of these projects is a band they put together a few years ago. They each began taking music lessons at Sweetwater Sound in Fort Wayne and began playing together at home. Eventually, they began performing for family members, and before long found themselves playing events, including local parades and charity functions. All the girls sing and each plays an instrument: Charis on piano, Cayley plays the bass and Kenady is the drummer. Together they have written 20 original songs and have mastered another 100 cover songs for their performance repertoire. They call themselves The Angel Project.

The name of the band holds special meaning for its members. “Our dad was diagnosed with cancer a couple years ago,” Charis said. The aggressive treatment that he had to undergo, along with the loss of a much-loved dog, left an impression on the family and caused the young girls to think a great deal about angels “and how they’re always with us.” But more than that, the sisters realize that, as Charis put it, “we have to be angels for others, so it kind of all tied in at the end.”

Homeschooling has allowed them the freedom to pursue their personal passions. It has also brought them closer as sisters since they spend much of their days together rather than in separate classrooms. While they still have some sibling squabbles, they consider themselves best friends and believe that the work they do together has brought them close and kept them that way.

The Catholic faith that the girls have been raised with influences their desire to help others and to change the world. “As we do all of these projects and stuff, it always comes back to following the message of ‘do unto others what you would have them do unto you,’ and our passion to help others has come a lot from our faith,” said Kenady.

“It drives it,” Charis admitted. “We’ve always been faith-driven.”

Kenady agreed. “We have kind of a little saying that we like to use in everything we do, and it’s basically just saying ‘everyday, in every way, anyone can make a positive impact on the world around.’ Kind of just encouraging others that, even though it may seem like you’re too small to make a big difference, but if everyone is trying, then you really can make a big difference.”

Their grandfather, Michael Floyd, ascribes their overwhelming generosity to the influence of previous generations of grandparents, including his wife, Georgia, whose generous heart has embraced dozens of children of various ethnicities. “And that’s the way we’ve always been as a family – reaching out and seeing what we can do for other people.”

Each of the girls has big career plans: Charis hopes to attend the California Institute of Technology in Pasadena and become an astronaut; Kenady plans to go into the medical field, probably neuroscience; Cayley hopes to become a wildlife veterinarian and ecologist/conservation biologist.

Even Disney may have plans for the singing sisters. But they are not waiting for any future event to begin changing the world: They are proving that one person can be a force for change in their world, no matter the person’s age.