Hundreds, many in favor and some opposed to same-sex marriage, gathered on the Allen County Courthouse lawn for a rally for traditional marriage that was sponsored by Shepherds United. Many priests, seminarians and the faithful of the diocese were present at the rally July 1.

FORT WAYNE — Pastors, priests and ministers who comprise Shepherds United held a rally July 1 on the lawn of the Allen County Courthouse to uphold traditional marriage.

Joined by hundreds attending the lunchtime marriage rally, clergy from various churches in the Fort Wayne area spoke on the biblical, societal and religious freedom implications of governmental attempts to redefine marriage.

On June 26, the day the U.S. Supreme Court issued rulings on the Defense of Marriage Act (DOMA) and California’s Proposition 8, three of the Shepherds United pastors, including Father Jason Freiburger, diocesan vice chancellor, read a statement in a news conference at the Archbishop Noll Catholic Center.

“Though the Supreme Court’s rulings on DOMA and California’s Proposition 8 come as no surprise, they are disappointing,” said Rev. Otha Aden, pastor at Southern Heights Baptist Church in Fort Wayne. “As Christian pastors, priests and ministers we believe that God Himself instituted marriage — long before our nation began — as the life-long union of one man and one woman. In fact, Jesus Himself reminded us that ‘… at the beginning the Creator “made them male and female,”’ and said, ‘For this reason a man will leave his father and mother and be united to his wife, and the two will become one flesh (Mt 19:4-5).’ That’s why as followers of Christ, Christians are conscience-bound to declare marriage as the union of one man and one woman, no matter what the courts or legislatures may say. Defending the truth is more important than personal popularity.”

“Marriage is a fundamental building block of society and it is the only societal institution that binds parents to their offspring,” said Father Jason Freiburger. “Men and women are equal but not interchangeable. Indeed, only from the coming together of one man and one woman are children created and it is in this relationship that a child is given the best opportunity to grow and thrive.”

“Men and women complement one another physically, psychologically and emotionally. Only a man can be a father and only a woman can be a mother,” shared Rev. Peter Gregory, associate pastor at St. Paul’s Evangelical Lutheran Church in Fort Wayne. “Every child benefits from the nurturing of a mother and the leadership of a father. While having one mother is a blessing, having two mothers or two fathers is confusing for the child and detrimental to his or her wellbeing.” 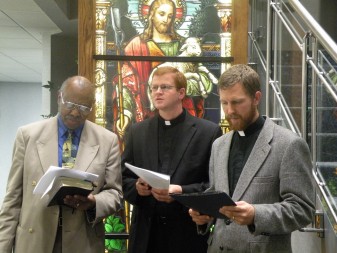 At the marriage rally on July 1, Franciscan Father David Mary Engo of the Franciscan Brothers Minor was one of several speakers who represented various denominations.

In his brief talk Father Engo noted, “Our country is very confused right now, and it is coming out in the courts.”

He said the country is trying to define marriage as something other than one man and one woman, “and we have no right to redefine marriage,” he emphasized as the crowd erupted into a loud applause. Marriage, he said, is not a human institution, but a divine institution.

He encouraged all to read and listen carefully to what’s being said, how it is being said, “and how this will affect us as Christians.”

“The threat is real, and we need to be attentive,” he said.

“We must proclaim the truth in season and out of season. My brothers and sisters, we are out of season,” Father Engo added. “But the Church is at its best when the world is at its worst.”

He encouraged those gathered at the rally to bring the faith back to the people, back to the public square and set the world ablaze with the love of Jesus Christ.