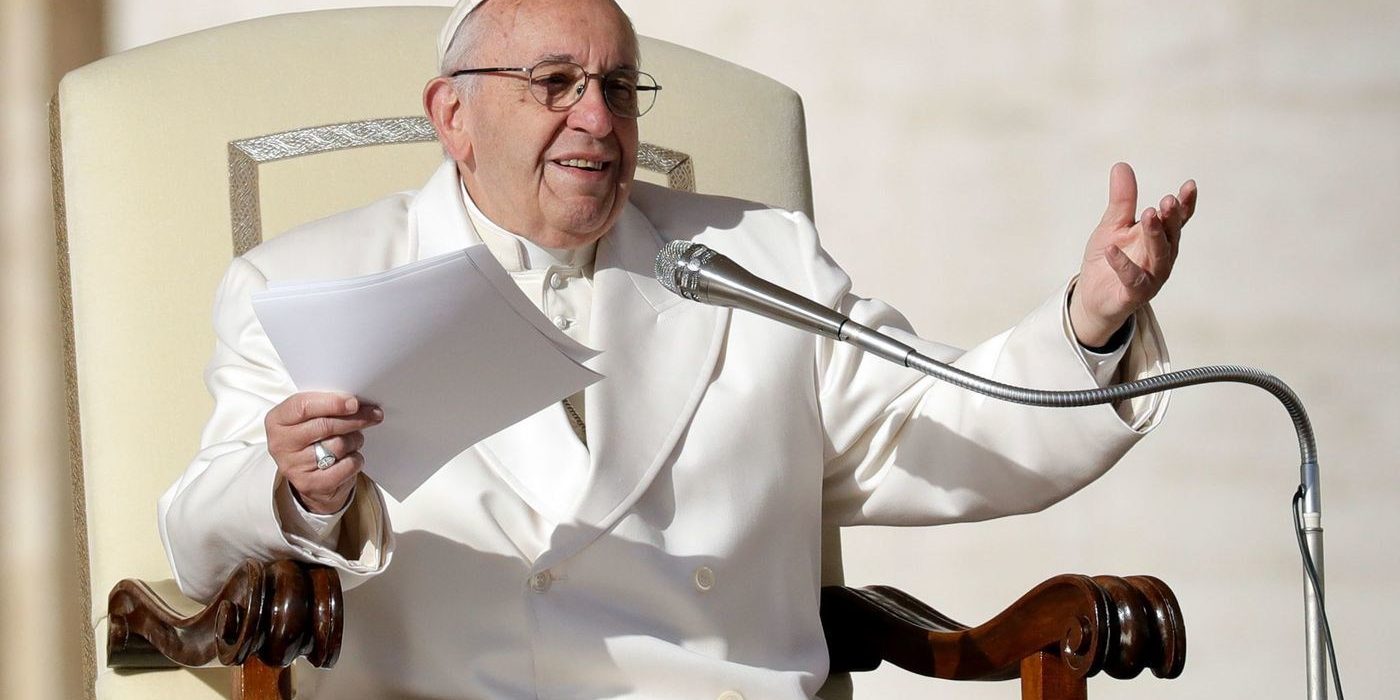 VATICAN CITY (CNS) — People have a responsibility to check the source of what they share on social media to ensure it is not “fake news” designed to further prejudices or increase fear, Pope Francis said. 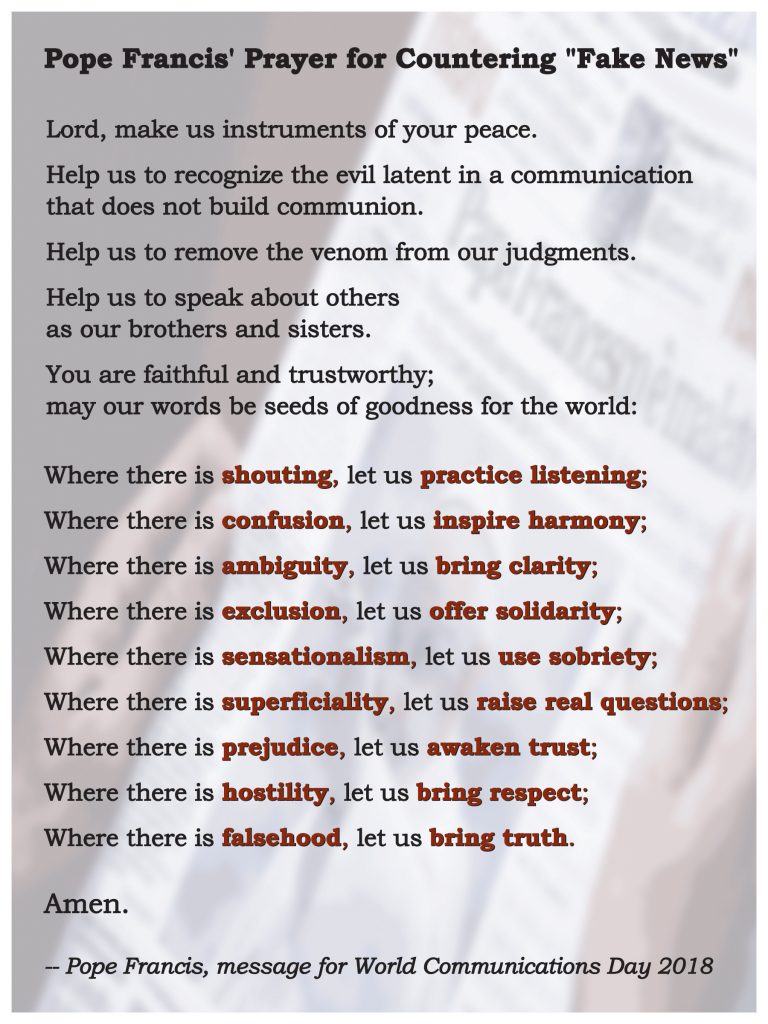 At the end of his message for World Communications Day 2018, Pope Francis included a prayer he wrote adapted from the “Prayer of St. Francis.” The message was released at the Vatican Jan. 24, the feast of St. Francis de Sales, patron saint of journalists. (CNS illustration/Joanna Korhorst) See POPE-FAKE-NEWS Jan. 24, 2018.

The message is a reflection on the theme, “’The truth will set you free.’ Fake news and journalism for peace.” World Communications Day will be celebrated May 13 at the Vatican and in most dioceses. The papal message was released at the Vatican Jan. 24, the feast of St. Francis de Sales, patron saint of journalists.

Fake news is so effective, he said, because it mimics real news but uses “non-existent or distorted data” to deceive and manipulate.

The first to employ the fake-news tactic was the serpent in the Garden of Eden who convinced Eve she would not die by eating the fruit of the forbidden tree, he said. The Bible story shows that “there is no such thing as harmless disinformation; on the contrary, trusting in falsehood can have dire consequences.”

Pope Francis praised educators who teach young people how to read and question the news and the information they see presented on social media. He encouraged efforts to develop regulations to counter fake news and he praised tech and media companies for trying to improve ways to verify “the personal identities concealed behind millions of digital profiles.”

But, he insisted, individuals always will have the final responsibility for discerning what is real news and what is helpful to share on social media.

“We need to unmask what could be called the ‘snake tactics’ used by those who disguise themselves in order to strike at any time and place” like the serpent in the Garden of Eden did.

The snake’s power grows as people limit their sources of information to one outlet, especially if that outlet is a social media platform whose algorithms are based on providing users with more information like they have just read, the pope said.

“Disinformation thus thrives on the absence of healthy confrontation with other sources of information that could effectively challenge prejudices and generate constructive dialogue,” he wrote.

People who repost or retweet such false information, the pope said, become “unwilling accomplices in spreading biased and baseless ideas.”

One way to know if something should be checked and not be shared, he said, is if it “discredits others, presenting them as enemies, to the point of demonizing them and fomenting conflict.”

In the modern world, with the rapid and viral spread of news and information — both real and fake — lives and souls are at stake, he said, because the “father of lies” is the devil.

True discernment, the pope said, means examining information and keeping what promotes communion and goodness, while rejecting whatever “tends to isolate, divide, and oppose.”

“We can recognize the truth of statements from their fruits: whether they provoke quarrels, foment division, encourage resignation; or, on the other hand, they promote informed and mature reflection leading to constructive dialogue and fruitful results,” Pope Francis wrote.

Journalists, he said, have a special responsibility in the modern world amid the media “feeding frenzies and the mad rush for a scoop.”

Pope Francis asked media professions to promote “a journalism of peace,” which does not mean ignoring problems or being saccharine. It means “a journalism that is truthful and opposed to falsehoods, rhetorical slogans and sensational headlines.”

A journalism of peace is at the service of all people, “especially those — and they are the majority in our world — who have no voice,” he said. It is “a journalism committed to pointing out alternatives to the escalation of shouting matches and verbal violence.”

Pope Francis ended his message with his own adaptation of the “Prayer of St. Francis” for both those who report the news and those who read or watch it.