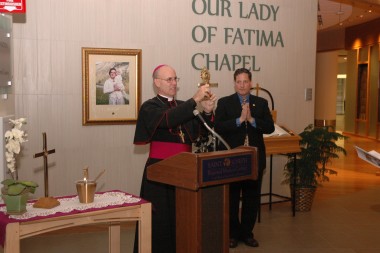 Bishop Kevin C. Rhoades holds a relic of St. Gianna Beretta Molla during an enshrinement to the saint at Our Lady of Fatima Chapel at St. Joseph Regional Medical Center in Mishawaka on Feb. 22. Bishop Rhoades blessed the picture and enshrined relics at the hospital chapel, and on Sunday, he celebrated a Mass for couples struggling with infertility at the motherhouse of the Sisters of St. Francis in Mishawaka.

MISHAWAKA — Most Catholics can relate to St. Gianna Beretta Molla, for she lived the ordinary kind of life many Catholics live: She had a spouse and children and also held down a job. St. Gianna opted to continue a high-risk pregnancy rather than undergo treatment that would harm her unborn child and died in 1962, one week after giving birth to a healthy daughter. She was survived by her husband and three other children.

Canonized in 2004, the International Year of the Family, St. Gianna was the last saint to be canonized by Pope John Paul II.

During the weekend of Feb. 22-24, St. Gianna also became a special saint for the diocese of Fort Wayne-South Bend. Her picture and relic were enshrined in a Feb. 22 ceremony at the diocese’s only Catholic hospital, St. Joseph Regional Medical Center in Mishawaka.

Introducing the enshrinement was Tom McKenna, founder and president of the St. Gianna Physician’s Guild. The guild was started in 2006 to uphold and promote Catholic values in the lives and practices of medical personnel and help them defend those values in the public square. St. Gianna, a pediatrician, is the guild’s patroness.

At the enshrinement ceremony in the hospital’s lobby outside the entrance to Our Lady of Fatima Chapel, Bishop Kevin C. Rhoades noted that the St. Gianna shrine was appropriate for the hospital, for her work as a doctor exemplified what Catholic healthcare is about.

“She is a beautiful model — especially in our culture today — of witness to the Gospel of Life,” Bishop Rhoades said, adding that St. Gianna saw her profession to treat sick children not just as work, but as a vocation, just like her vocation to marriage and motherhood.

He also praised St. Joseph Regional Medical Center as “an institution and family that stands for life as part of the core of its truly Catholic mission.” That mission provides care of the whole person, he said, which includes spiritual and pastoral care for the patient and the families.

“People who come here experience the compassion of Christ,” he said, “and that is what distinguishes a place like St. Joseph Regional Medical Center from other places where much, much good takes place as well. But what is the inspiration here is Jesus Himself and His self-giving love for us. So, St. Gianna reflected that like a mirror.”

Albert Gutierrez, president and CEO of the hospital, told Today’s Catholic that the hospital was “proud” to host the saint’s relic.

“Her legacy has united, inspired and encouraged countless mothers, physicians and other healthcare providers,” he said. “We invite our community to learn her amazing story and to visit our hospital to see this beautiful display in her honor.”

Indeed, the St. Gianna enshrinement came to the diocese because a member of St. Matthew Parish had developed a devotion to the saint after learning more about her. Barb Fralish, a wife, mother and nurse, told Today’s Catholic that Gianna’s story of an ordinary person doing extraordinary things helps inspire her in the care of her own disabled son.

Franciscan Sister Laureen Painter, the hospital’s vice president for Mission Integration and Ministry Formation, told Today’s Catholic that the sanctity of life is “critical” to the hospital as a faith-based organization. Thus, the enshrinement of St. Gianna is a “manifestation of this founding conviction,” she said.

“As we share this relic with those who come through our doors, we invite them to pray for St. Gianna’s intercession for expectant mothers here in Michiana who experience difficulties during pregnancy or while giving birth.” 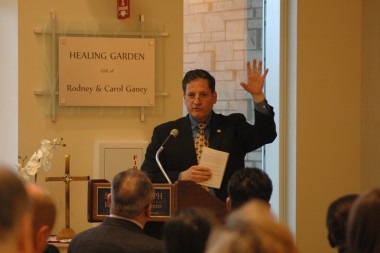 Tom McKenna, the founder and president of the St. Gianna Physicians’ Guild, who is also a personal friend of St. Gianna’s family, speaks on the life of St. Gianna as part of the enshrinement ceremony. McKenna also made presentations on Feb. 23 at St. Therese, Little Flower Church in South Bend and after Mass on Feb. 24 in the chapel of the Sisters of St. Francis in Mishawaka.

McKenna also spoke about St. Gianna at the University of Notre Dame the day of the enshrinement and gave another presentation the evening of Feb. 23 at Little Flower Parish Center in South Bend. On Sunday, Feb. 24, he spoke at the Mishawaka motherhouse of the Sisters of St. Francis of Perpetual Adoration, following a 1 p.m. special Mass for couples struggling with infertility.

In his homily at that Mass, Bishop Rhoades said he had read that many couples struggling with infertility had been aided by the intercession of St. Gianna, who herself had suffered two miscarriages as well as other difficult pregnancies. In both her personal life and in her medical practice caring for children and their mothers, she gave strong pro-life witness, he said.

“St. Gianna is also an example of great faith and courage in the face of adversity and suffering,” he continued. “She refused to turn away from her faith in God and would not participate in any medical procedures that were immoral, that did not respect the dignity and sacredness of human life.”

This pro-life witness, he said, helps couples struggling with infertility realize that any infertility treatment must respect the right to life of the human embryo and aid the conjugal act, not substitute for it.

“Today we ask for St. Gianna’s intercession for couples struggling with infertility, that the Lord may bless them with children,” Bishop Rhoades said. “And, we also pray for those who will not be blessed with the gift of children, that they may remain firm in faith and their married lives may be blessed with much spiritual fruitfulness. Their embrace of the cross is a means to great growth in holiness.”

Bishop Rhoades also asked the many Sisters of St. Francis who were at the Mass to hold the couples struggling with infertility in their prayers and to ask the other sisters at their motherhouse to do the same. Noting that the Sisters of St. Francis maintain perpetual adoration, he called them a “powerhouse of prayer.”