Imagine not being able to attend Mass as a family, worshipping God together, because the lights, sounds, crowds or any other stimuli could trigger a massive behavioral outburst in a family member. Splitting up for Mass is often the only viable option that special-needs families see. Some families prefer to make this choice rather than risk aggressive behaviors or receiving condemning looks from other churchgoers.

Angie Profitt faces this reality every week and longed for another option. Profitt is a member of Belonging, a grassroots group that falls under the Ministry with Persons with Disabilities in the Diocese of Fort Wayne-South Bend. Her son Cole, 16, is on the autism spectrum. Things that might seem inconsequential to others present major problems for him, even the squeaky sanctuary door that he personally fixed by bringing a can of WD-40 to church.

“As he was getting older, I felt like I was struggling to find ways to show him that he is a member of the church community and what he could do to be a helpful member,” Profitt declared.

While aiding in his confirmation preparation, Profitt discovered that Cole had excellent skills for organizing food pantry goods at the family’s home parish of St. Elizabeth Ann Seton in Fort Wayne. She wanted him to feel this same sense of excitement and purpose in his faith community – “just the same way I feel when I come to church. … And it just became something important to me.” 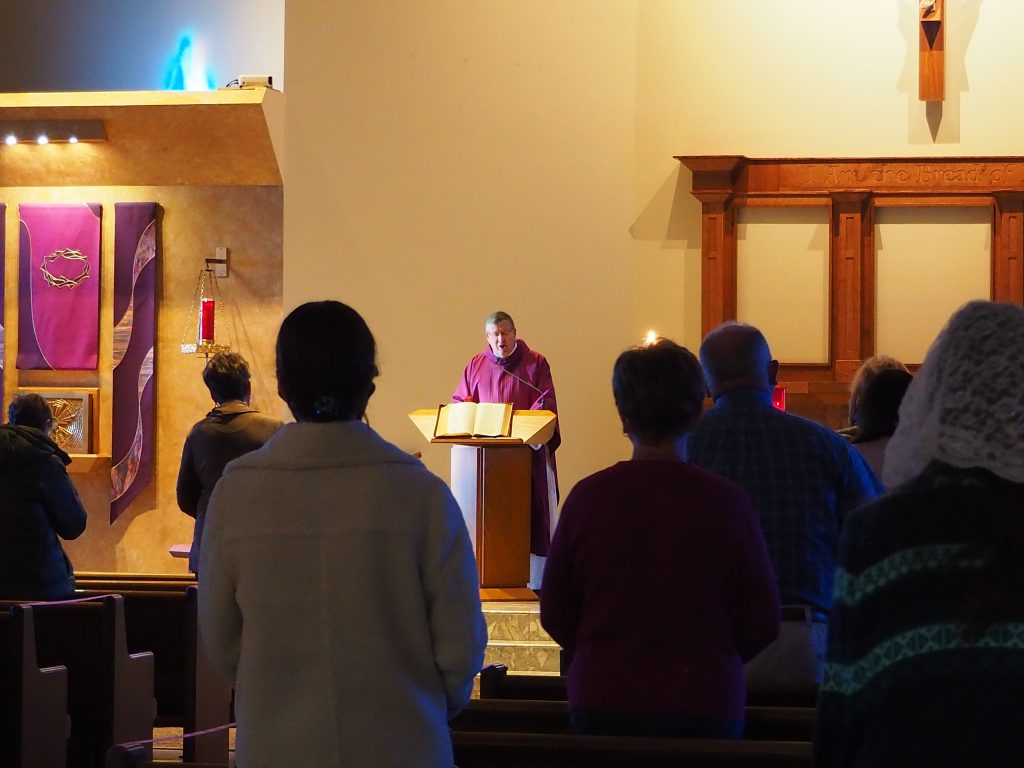 Photos by Jennifer Barton
Father David Voors gives a 1-2 minute homily during a sensory-friendly Masses at St. Elizabeth Ann Seton Parish in Fort Wayne in February. This special Mass features a setting with lower lights, decreased volume and a shorter length to accommodate those with special needs.

Belonging, whose name describes its mission – “to ensure meaningful participation for individuals with disabilities and their families in all aspects of the life of the Church” – formed several years ago and has evolved into a group of parents, caregivers and others concerned about making the Church more inclusive for those with disabilities. Members come from a variety of parishes, mostly throughout the Fort Wayne area. The group previously helped organize a sensory-friendly, bilingual confirmation Mass presided by Bishop Kevin C. Rhoades and began discussing the possibility of holding sensory-friendly Masses at one of the local parishes.

“It’s really important for us to go to church as a family,” Profitt stressed. Cole had managed to make it through the confirmation ceremony with his classmates, which was no easy feat considering the large class size at St. Elizabeth. “But it was difficult. And it doesn’t have to be difficult.”

The idea for a sensory-friendly Mass was inspired by measures the Archdiocese of Cincinnati implemented in 2019, and where several parishes within the Dayton area now host these monthly Masses. “That’s what got me thinking. And I thought, let’s do this in little pieces; I’ll start with asking St. Elizabeth’s and we’ll see where this goes,” Profitt said.

So she took a leap of faith and met with her pastor about the possibility of hosting a Mass that would be more welcoming to people like her son: quieter, with lower lighting, shorter length, and increased tolerance of self-stimulating behaviors. Profitt remarked, “In Belonging, we talk about so many different ideas that we have, and this is one that we can do. It won’t cost us a dime.”

Father David Voors, pastor of St. Elizabeth, recognized the need for a Mass specifically designed for people with special needs and eagerly jumped aboard. He said, “I think most anybody, once they realize the good that is there and it doesn’t take much extra work at all, I’m hoping more will be able to say ‘yes, we’d like to do that.’”

He continued, “It’s a quiet Mass, is basically what it amounts to. I think the priests in our diocese will respond with great enthusiasm. And I think by that also we will help others in the parish become more caring, loving and approaching to those who may have been sidelined in the past.”

A common ordeal that many parents of special needs children have shared with the Belonging ministry is times that other parishioners have attempted to force them into cry rooms if their children have occasional, uncontrolled outbursts in church. This attitude can be distressing for parents who need to be spiritually fed while at the same time exemplifying Mass attendance to their children.

“As a parent with a child with special needs, we go to church sometimes and we feel like everybody’s looking at us, and I’m so afraid for my kid to do anything,” said Profitt. “Sometimes we need that space, too, as a family, that that low-sensory Mass offers us; that we don’t feel like there’s any kind of judgement or fear of someone looking at you. … I still hear the message loud and clear, and I’m with my family, celebrating Mass with my family the way it should be.”

People with special needs are not the only ones who feel this sense of isolation, even in their own parish, added Trisha Trout, evangelization and communications coordinator at St. Elizabeth. For Trout, it is crucial to reach out to those with mental illness as well, who sometimes are affected by the same type of stimuli, as she is. “I think those with mental illness are often overstimulated trying to live day-to-day life.”

She explained that the stigma of mental illness can be so great that oftentimes those afflicted will try to hide it, so a Mass with fewer people and less distractions can provide a more comfortable environment for them. “The darkness of the church also creates a safe-feeling atmosphere where one can feel hidden and totally immerse themselves in God.” 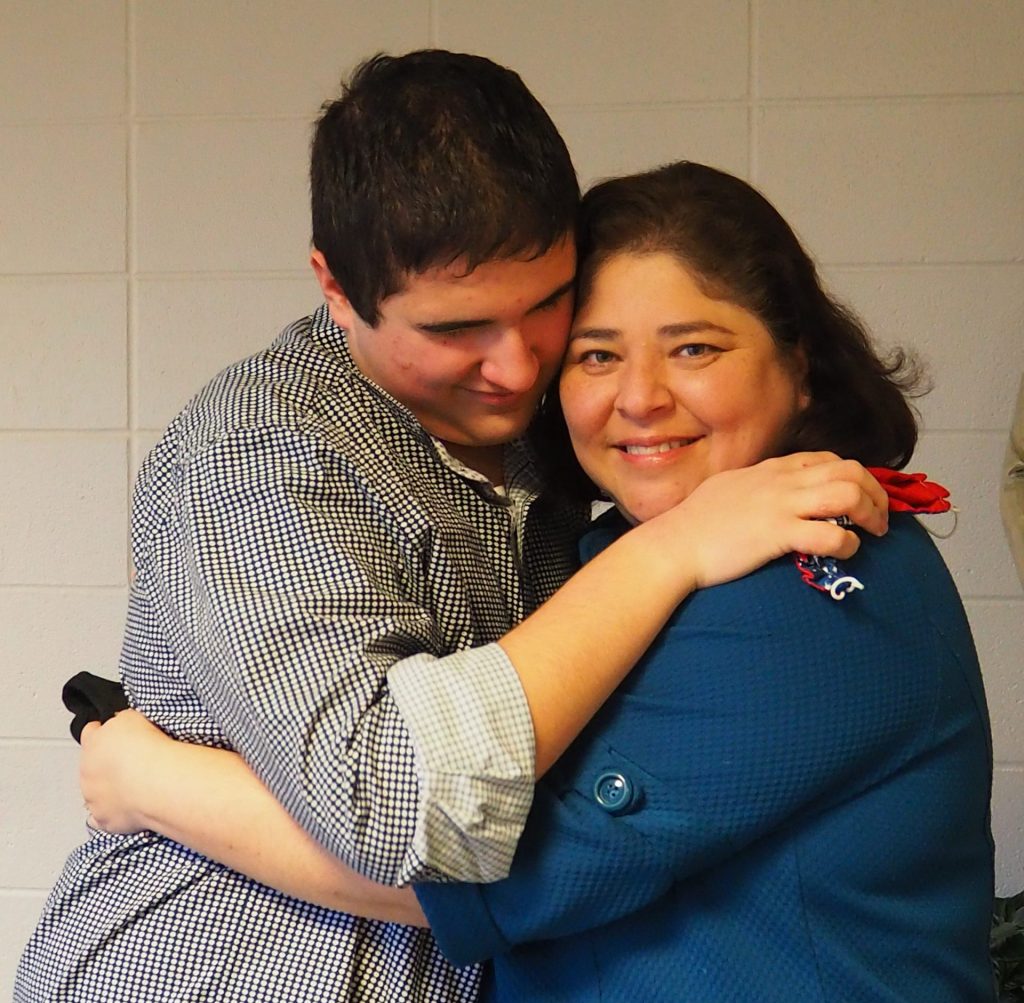 On behalf of her 16-year-old son Cole, Angie Profitt helped to bring awareness of sensory-friendly Masses to her parish priest. She feels it is important for her son to be able to participate in and enjoy Mass and for her entire family to attend together.

The benefits of sensory-friendly Masses are not limited to members of the parish. Donna Hazelett, a parishioner at St. Joseph Parish in Fort Wayne, heard about the sensory-friendly Masses through her contacts in Special Olympics. Her adult daughter has learning disabilities, and they decided to give the special Mass a try. “It’s a welcoming place because it’s not hectic and filled with distractions … People with disabilities are easily distracted by their atmosphere. Here there’s less people to be intimidated by.” Hazelett’s daughter even began calling the special Mass “her church.”

Although Hazelett acknowledges the progress the Church has made over the years in accepting people with special needs, she believes there is still much more that can be done. “I wish we could do more things like this for people with intellectual disabilities. … I’m thrilled that a priest wants to do this; good for him. … I’m excited about the future and the possibilities of where this could lead.”

Originally set aside as a separate Sunday Mass, St. Elizabeth shifted the date due to pandemic-related circumstances. It is now celebrated on a monthly basis at a previously scheduled weekday evening Mass. Before this change, attendance peaked at around 35 people, though the numbers cannot express the impact of the Mass to those who need it. Trout noted that families tended to prefer the dedicated sensory-friendly Mass and is hoping to return to that in the future.

Members of Belonging hope to see the use of sensory-friendly Mass spread throughout the diocese, bringing greater spiritual fruits to those with special needs, their families and church communities. Lisa Schleinkofer currently serves as the leader of Belonging. Together with Allison Sturm from the Ministry with Persons with Disabilities, she stated: “As requests from individuals and families who need a sensory-friendly Mass grows, Belonging is committed to assisting pastors, staffs and parishioners to make this available in their parish community in the hope that more people throughout the diocese can experience a sensory-friendly Mass.”

While Profitt was inspired to request this service of her parish by her son’s needs, she said, “I also know that there’s so many other people that are affected that I never imagined would be interested in something like this.” Mental illness, social anxiety and various disabilities can prevent people from full inclusion in the Body of Christ. A Mass specifically tailored to their needs can be a valuable step to show love and acceptance as a Church to these members.

“The saddest thing is we took so long just to ask the question,” said Profitt.

March is national Disabilities Awareness Month, and this month’s Belonging meeting will be focused on the topic “Creating a Sense of Belonging in Your Parish.” The meeting will be held on Tuesday, March 16 over Zoom and is open to all.

For more information on Belonging or advocating for those with special needs in a parish, contact Allison Sturm at [email protected] or 260-399-1452.